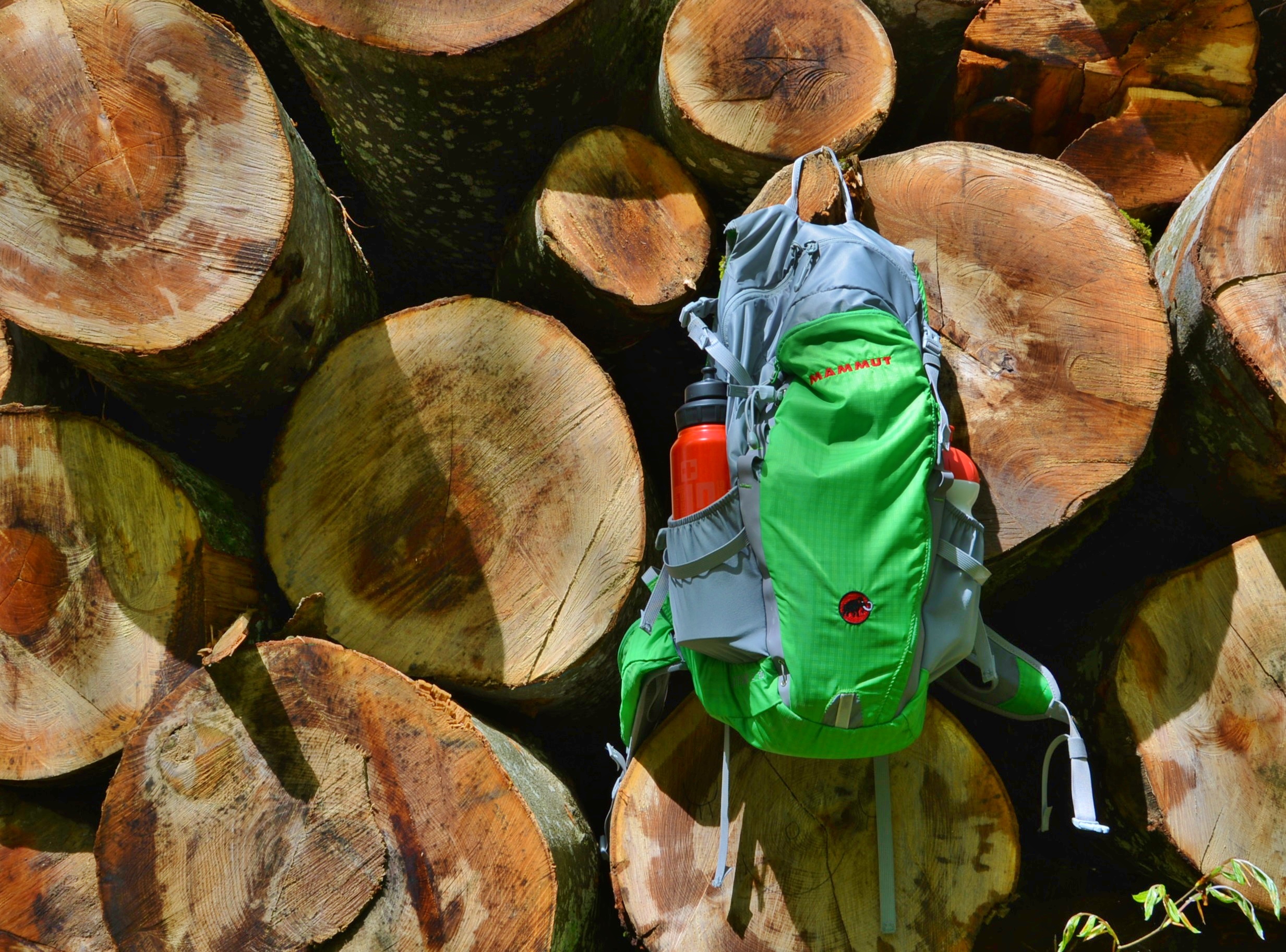 Already in a couple of days, a few days
You will take your backpack and the guitar
Few words goodbye
Pythagoras, farewell
Goodbye to you canto, cantare
/Halina Kunicka, Summer, summer is waiting; Polish song/

Basic protection and support of my foot driving force, I described vividly in the first test of sport equipment, means in the article entitled Mammut MTR Pro Low, where the heroes were shoes for running in the terrain. 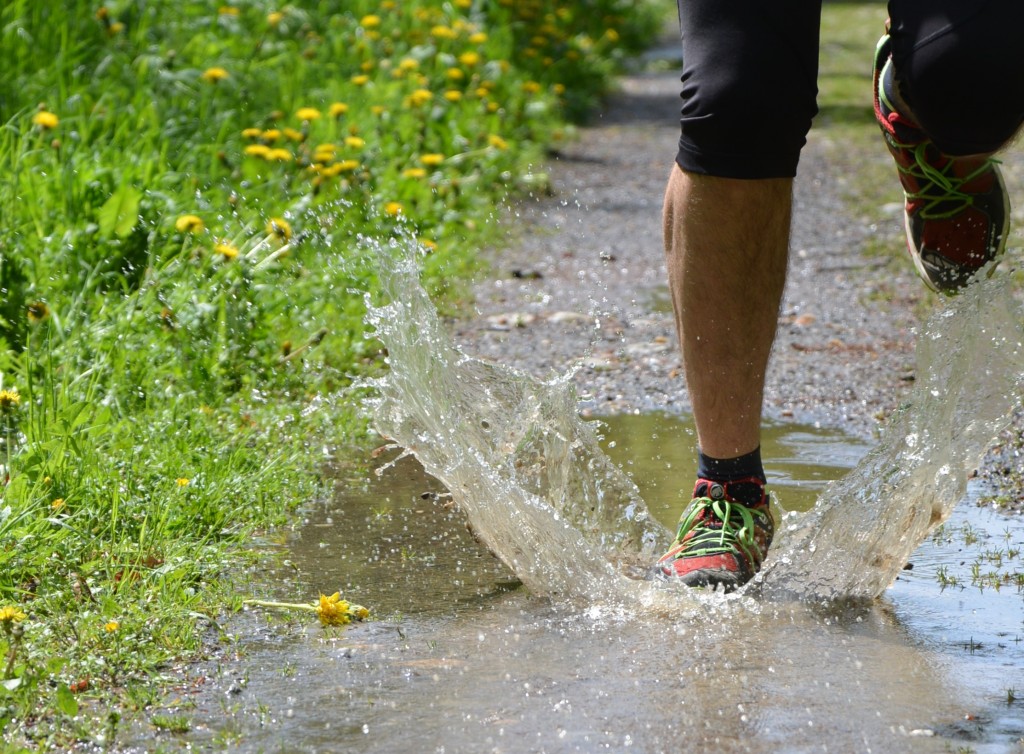 Since the drive transmission is protected, I can take a closer look at a warehouse facility, in other words at the backpack Mammut Lithium Z 20 (mentioned loosely at the occasion of my aiming for the Moon).

I start with the most important matter, namely the color. The backpack is green-gray (code named dark spring-iron). I like very much these sophisticated color names that are used by Mammut. Just like in the American movie about commandos rescueing the world from the overwhelming forces of the communists, terrorists or aliens (Alpha Romeo Mike Yankee Alpha Lima Papa Hotel Alpha Bravo Echo Tango). On a green fabric red Mammut logo looks fantastic! Backpack Lithium Z 20 can be aquired in two more colors (dark orange-iron and smoke-iron). I like the most version with the green. Over! 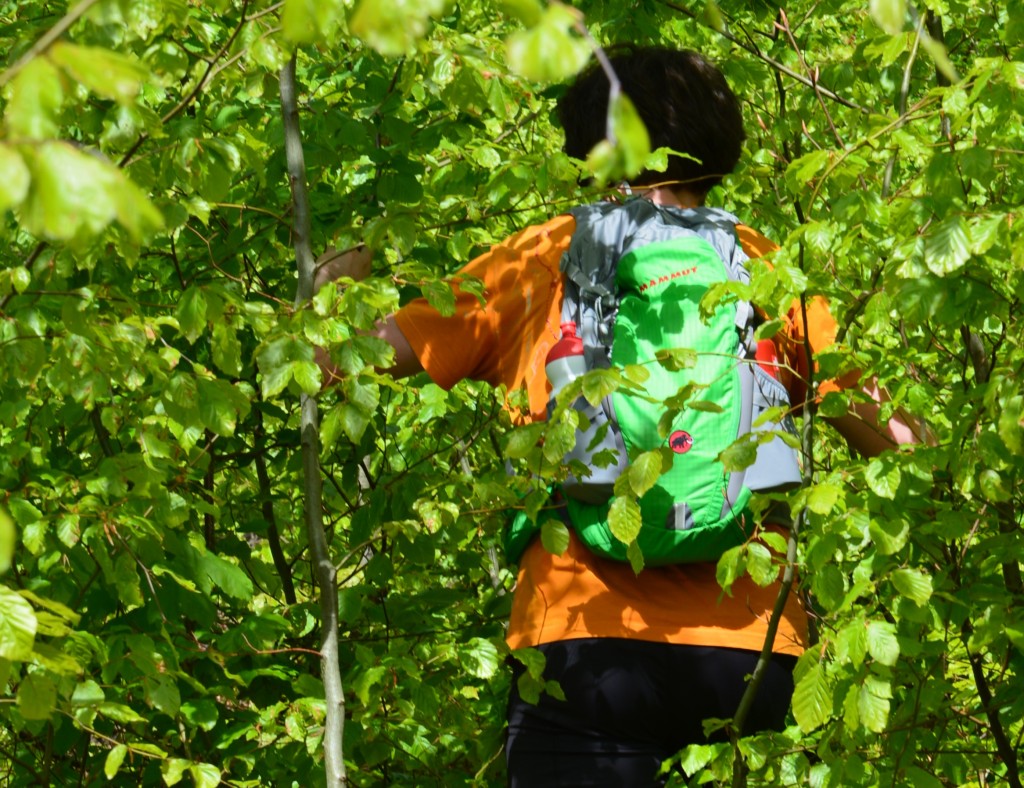 It is a backpack designed primarily for trail running but fits to all outdoor activities. It weighs only 630 grams according to the manufacturer. Me, on the kitchen scale (which my wife uses to prepare delicious cakes), came out a little more, because about 670 grams. Its dimensions are 48x26x19 centimeters. Name Lithium in the designers concept comes probably from lithium, which is the lightest metal known, with the atomic number 3. This element is highly reactive and flammable, so must be kept it in mineral oils or in an inert atmosphere. I remember from chemistry class, like a piece of lithium pulled out from the kerosene and thrown into the water was going round on the surface and was dissolving, fuming a huge amount of bubbles (hydrogen).

The zipper of the main compartment unzips below the half the height of the backpack, thanks to that can be easily pack from the front, which certainly would be appreciated by Jason Bourne looking for his identity:

He opened the knapsack and took out a pair of boots and heavy socks along with rolledup trousers and a coarse denim shirt. Somewhere in his past he had learned to pack with an economy of space; the knapsack contained far more than an observer might think. Where had he learned that? Why? The questions never stopped.
/Robert Ludlum, The Bourne Identity/

Backpack is compatible with a hydration system – a water tank with a pipe transferring water to the mouth. From the main backpack chamber, tube can be lead out through the holes on shoulder straps, on the left or on the right side and attached under rubber grips. 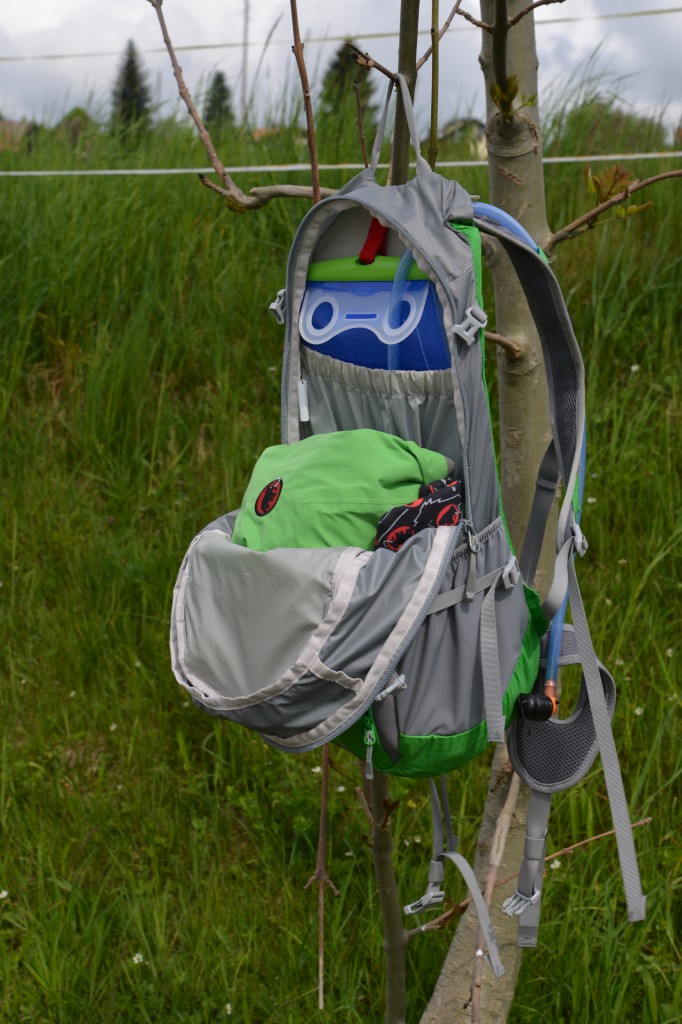 The hydration system is a fantastic assistance during long runs when at any time it is possible to drink without stopping and taking off the backpack. It is also important that when you insert the mouthpiece into the mouth, hands are free. The first time I used the hydration system in a backpack Mammut Lithium Z 20 was on Trail du Dents du Midi and as I said, I was delighted.

This backpack has additionally at the top a small pocket with handle with a piton (eg. to attach the keys)… 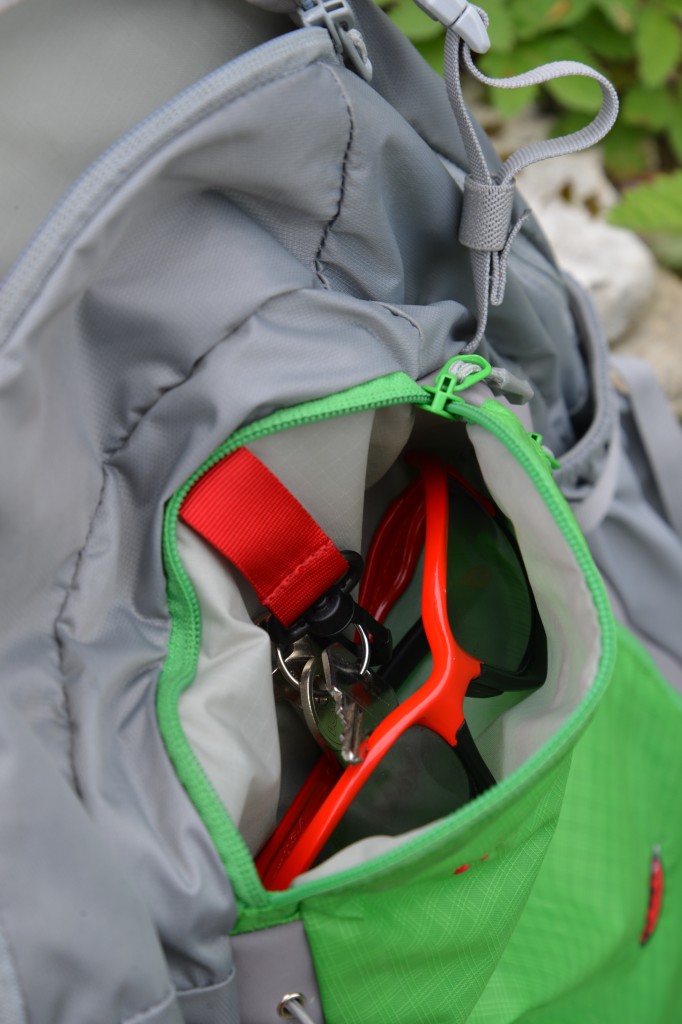 … and larger one, occupying more or less the entire front wall of the backpack (eg. for documents, maps). 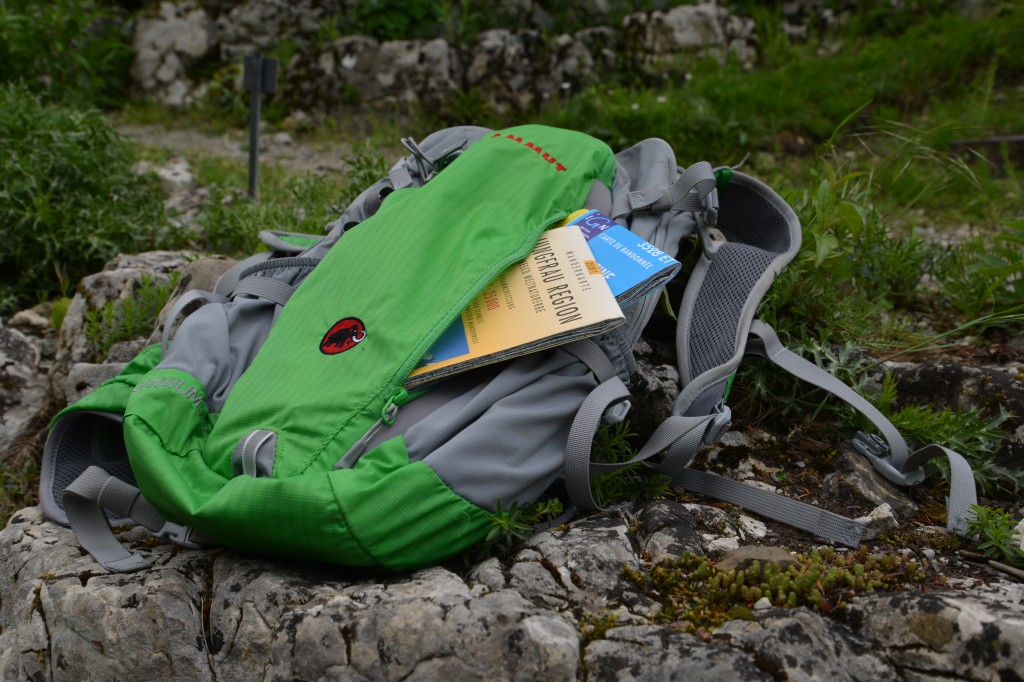 On both sides there are two flexible pockets (eg. for a spare water bottles, glove or cap), which can be further tighten and secured by means of straps. 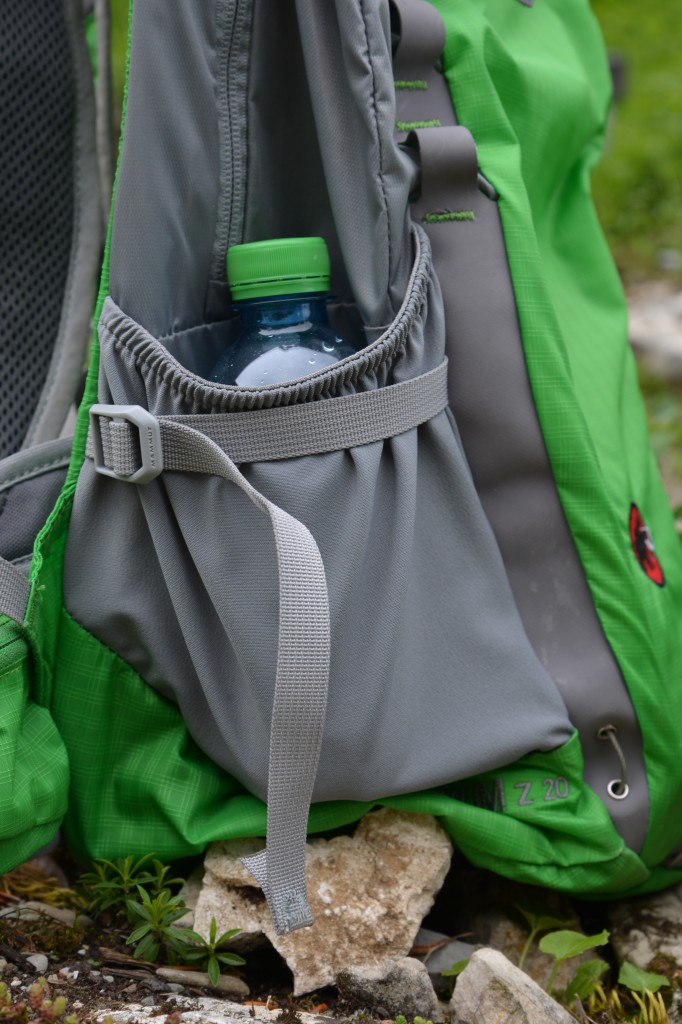 The suspension system consists of elastic shoulder straps with a soft mesh on the side of the back that dries quickly and allows the body to breathe (3-D Air-Mesh). From the outside, shoulder straps are reinforced with nylon mesh. As I said, on shoulder straps there are elastics sewn to attach the hydration tube, as well as reflective elements. Chest strap with a clip and whistle can be adjusted up and down, and of course wide. It prevents the shoulder straps from sliding sideways and prevents repositioning of the backpack during the run.

Innovative hip belt (designed for direct body contact and good ventilation) has the same role and also relieves the shoulders (weight, thanks to it is based largely on the hips). It is also made from 3-D Air-Mesh and on its left side is another pocket. In my opinion, the pocket is too much on the back and during the race it is hard to reach (eg. the phone, which is a mandatory equipment part in long distance mountain running). It is the only minus I have found in this backpack and I believe that the company Mammut will take to heart my constructive criticism and will make a slight facelifting. I hope that in the next version of the backpack Lithium Z 20, pocket will be more accessible, which means shifted toward the front. Could also add, by the way, another one, for symmetry – the ideal storage for a little something at eleven o’clock in the morning…

On the back side of the backpack being in contact with the back, there are soft mesh padding supports (made from 3-D EVA foam) with ventilation channels and between them “a chimney” allowing air circulation. 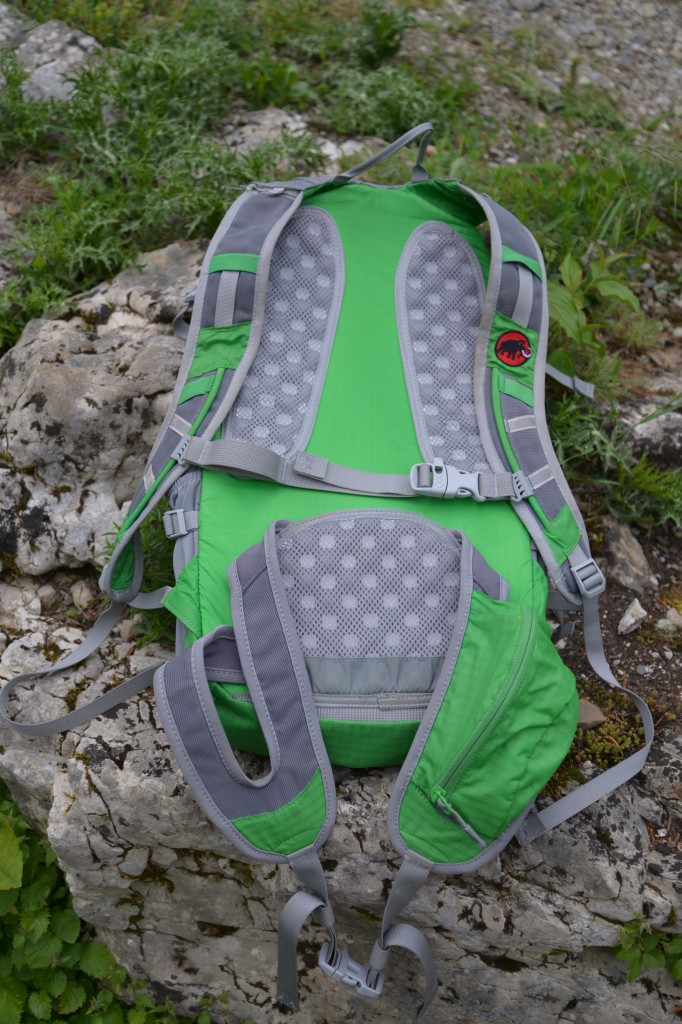 This backpack for my own needs is perfect. It stick to the back ideally, it is very comfortable, does not cause abrasions and allows back to breathe. And, of course, it is green.

The Blue said: Waste of breath.
Everybode will discolor with time.
But the Green just added:
– I hope… I hope…
/Jan Brzechwa, The Colors/

It ran with me already some kilometers, therefore I know what I write. What is more, my previous trail backpack from another company was not so comfortable and slightly rubbed the skin (seams were made from something that looked like a fishing line and in places where this line jutted from the fabric, it made a fakir from me).

I highly recommend the use of poles during long mountain runs. They help to maintain balance, relieve the knees and can lean on them, when majority of the race is done and legs barely dragging one by one. But the poles are not needed all the time and then it would be nice to have a place for their transportation. In my green backpack…

Because I am liege lord, because I am king,
Among green fields and soil!
/Edmund Wasilewski, Krakowiak/

…it is resolved in a very interesting way. At the bottom part of the backpack there is a retractable metal cable which can be pull out and slip back. One end of a pole is to be insert into the cable and the other is fastened on top of the backpack with a strip closing.
Theoretically to this backpack can be still attached various items which are considered to be necessary during competition, training or trip (eg. cup). This is done with 4 very strong hooks on the front of the pack and 2 on shoulder straps. 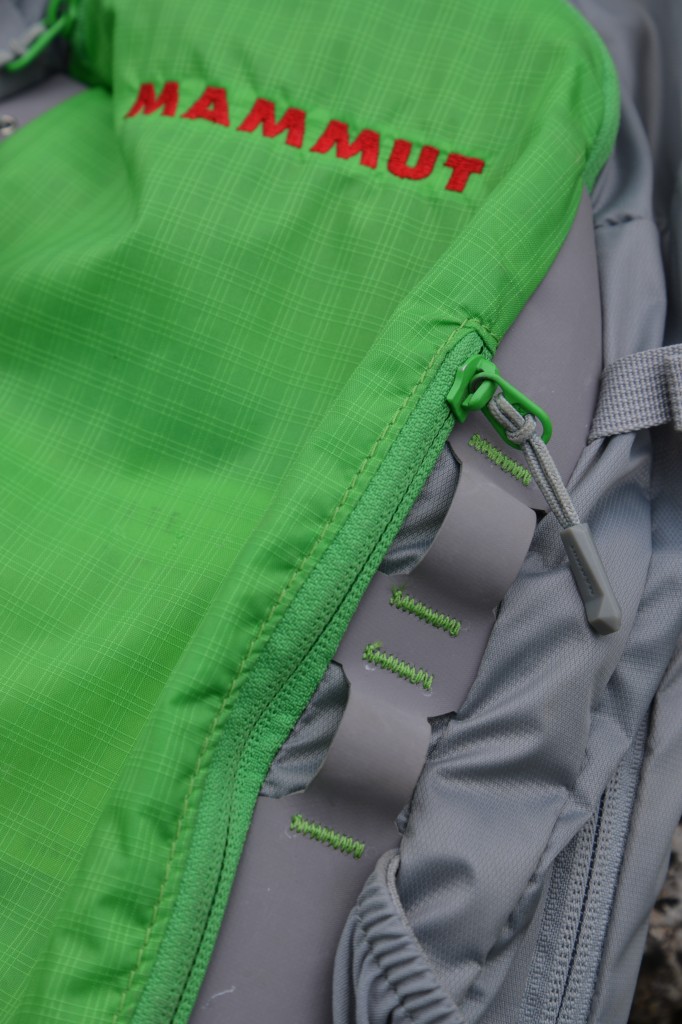 In practice, the extra things dangling by a backpack during the competition only disturb the balance and cause unnecessary noise but on a calm trip with the family or friends it is possible to hang there all Needful Things. 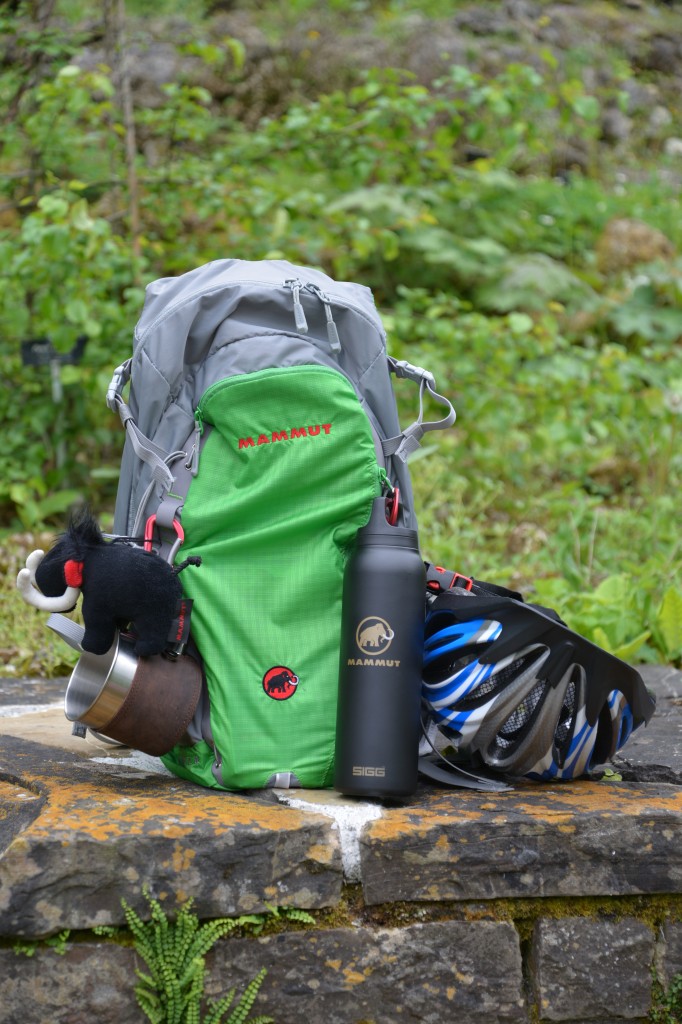