Aim for the moon, because even if you miss, you will be among the stars.
/Patrick Süskind, Perfume: The Story of a Murderer/

This quote is obviously not astronomically correct, because if you pass the moon, to the nearest star (not counting the Sun), will be still about 40 billion kilometers. However, it captures the spirit of adventure, exploration and constant trying…

Continuing my interest in mountain running, I took part in the Trail Dents du Midi, this time on a distance of 57 km. Before I will describe my adventures on the race, I have to mention that this time I was not in the “gray mass” of runners in the middle of the field, but I was the only one of its kind – I was the last one! Despite the fact that I rather missed the Moon, the joy of the completion of the race within the time limit was like landing among the stars.

Start was located in Champéry at 1050 meters above sea level. After receiving the start number, after the required control of equipment (torch, water supply, cup, thermal foil, hooded jacket, whistle) and briefing, I aligned on the starting line. It was still dark and the light was definitely needed. Starting time for amateur runners was set for 6:00 a.m. The gun fired and we moved on. Running through Rue Centrale due south we left the town.

And here is the interesting fact. The torch illuminated the darkness so that I remembered that I have been here a long time ago, when my younger daughter still rode in the pram. The route Le chemin des poussettes was quiet and safe idea for a nice family walk in the nature. Distance from Champéry to Grand-Paradis is about 2 km of gentle paths through the forest. On the spot there are great views to the majestic peaks of Dents du Midi and the possibility of dining in a covered place for a picnic. Return to Champéry by the same route. 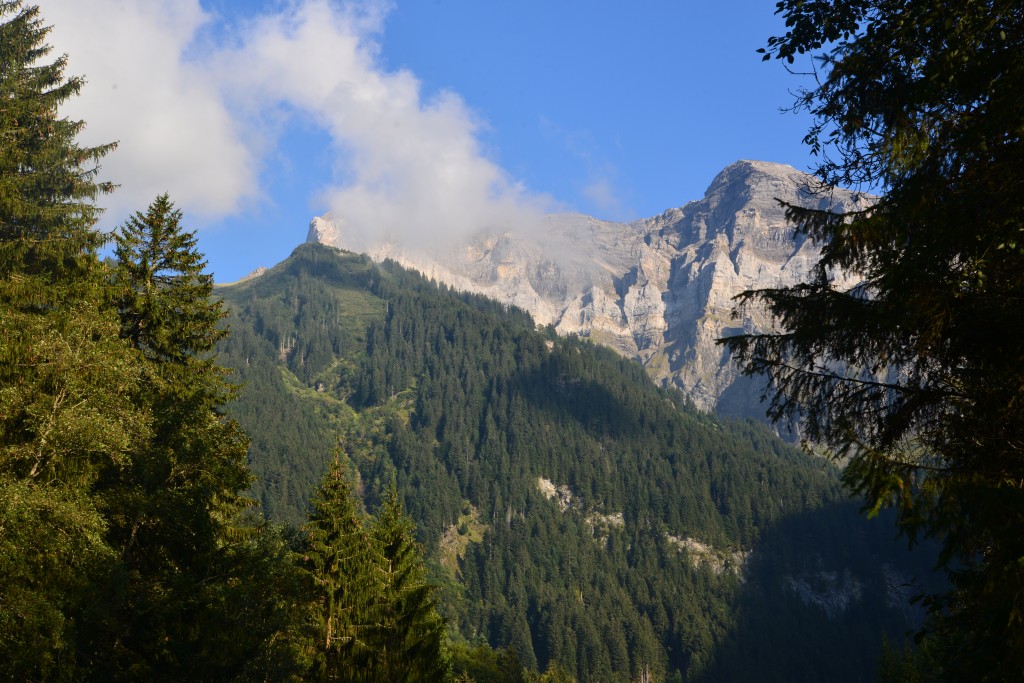 This time I did not see the peaks and to the finish line in Champéry I still had about 55 kilometers through the mountains.

From Grand-Paradis I ran lightly up the valley, through the Forêt de la Lui, up to a height of 1200 meters. Here the climbing began by the slope of the Dent de Rossétan to a height of about 1600 meters. Then, there was more or less flat terrain, suitable for running and rippling peacefully in the range of 400 meters up and down. 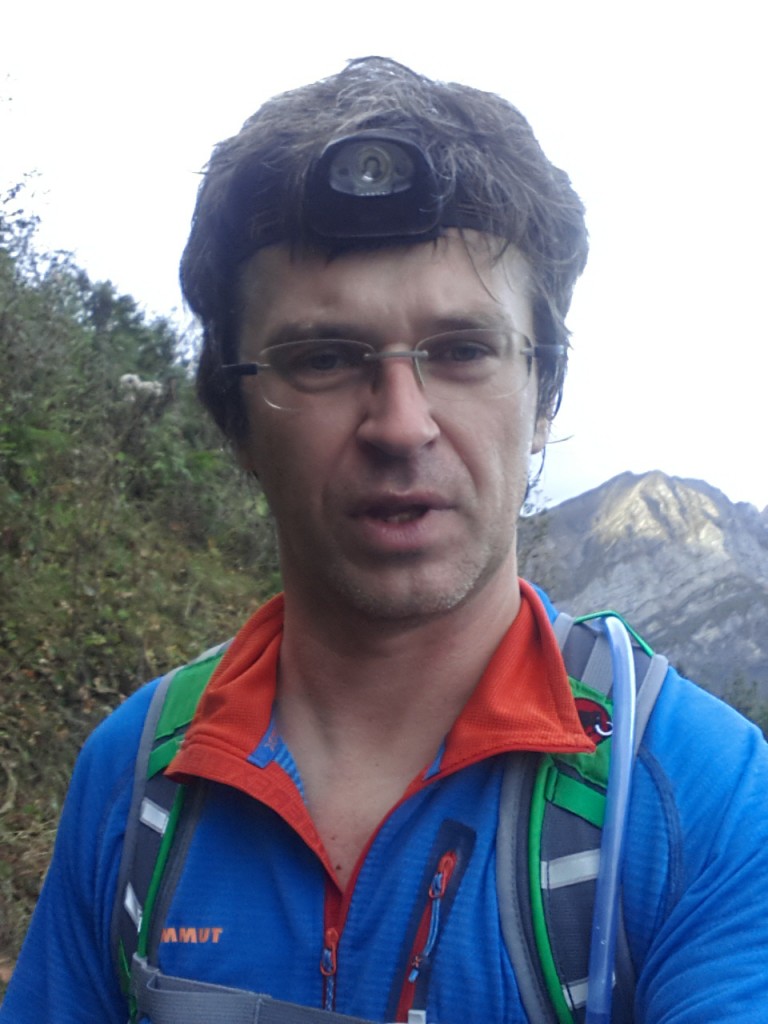 “To the dawn, dears to the dawn! The sun is coming inexorably from above the Pacific” /fragment from Polish song by Jan Pietrzak/

It started to get light about 7:30 a.m. and soon the rising sun illuminated the mountain peaks. 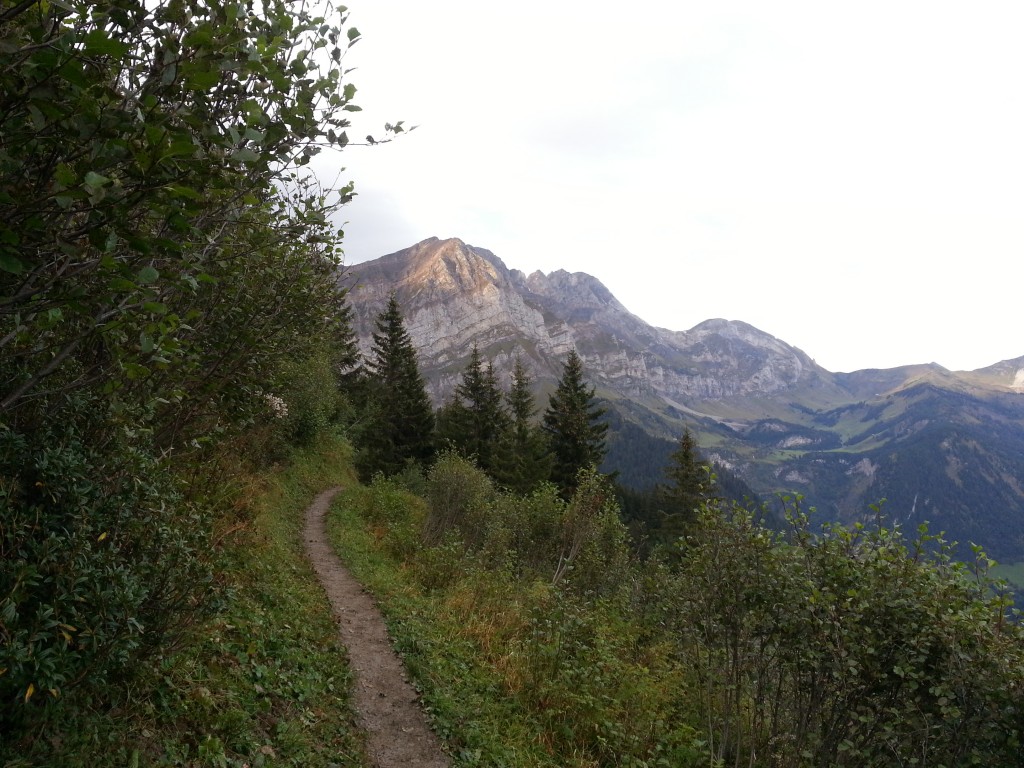 Cool dawn in the mountains

In the bottom – forests hidden in the shadow
Drown yet in the frosted mist
Which in the morning light
Speeding up slowly by gorges. 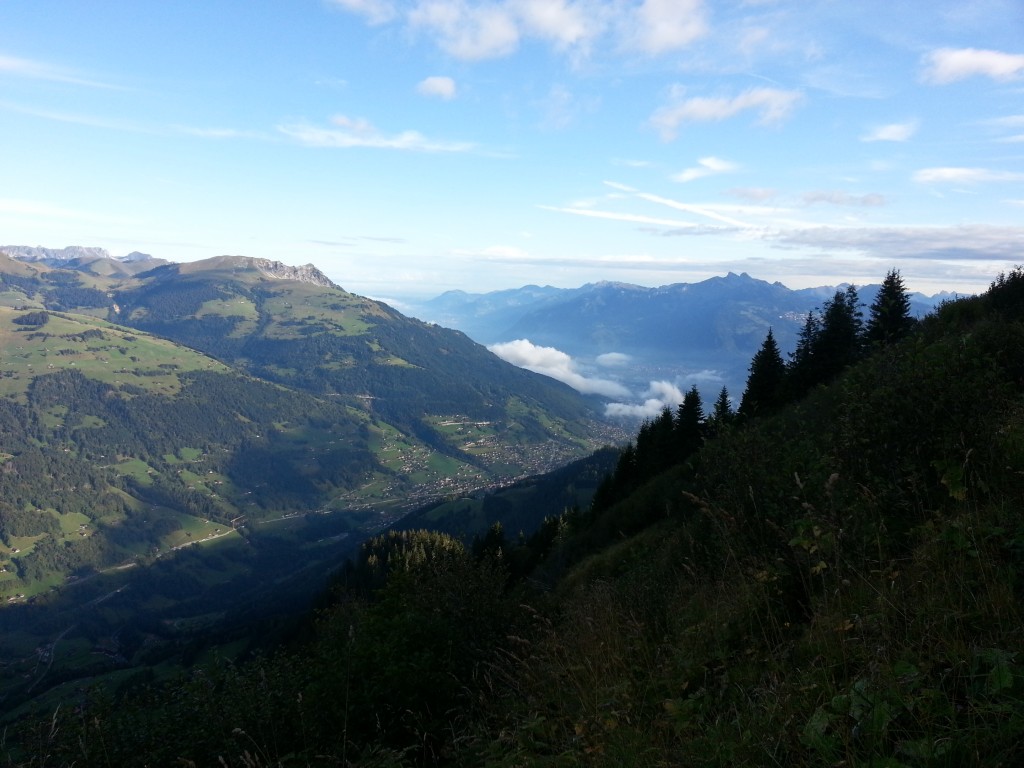 Mist in the valley

But now the breeze dispel the mist,
And it tears into the cloud sherds…
Like a spider’s soft yarn
Settles on the rocks edges.

And form under this grey-blue veil
The world looks more widely,
From the night, peaceful dreams awakened,
Such bright, fragrant, fresh.
/Adam Asnyk, Morning in the mountains/

The first checkpoint was at the foot of the Haute Cime, which is the highest “tooth” (3,257 m asl) in the group of seven peaks of Dents du Midi. Then a long section of several kilometres around the height of 2,000 meters, up to Signal de Soi, which was the first nutrition point (stocked like a 5 star hotel – bread, cheese, chocolate, fruits, tea, Coca-Cola, water).

Energized, I moved forward and continued enjoying the path rising and falling gently, still on the north side of the “teeth”. 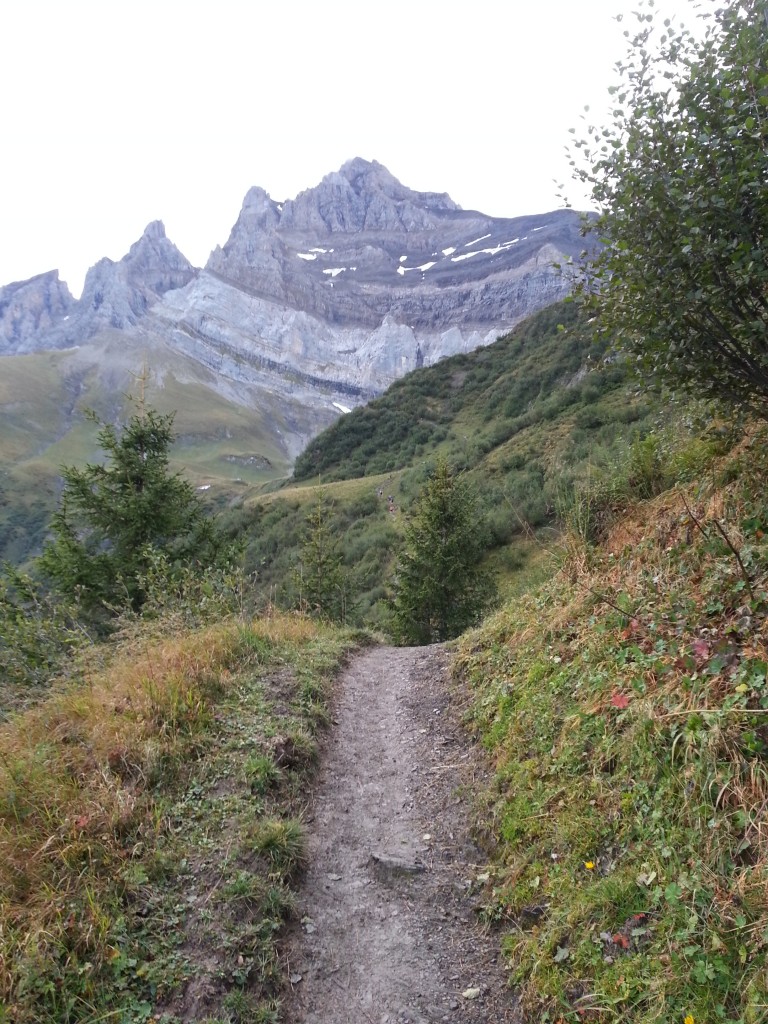 Grandma, why you have such big teeth?

From Chindonne (1604 m asl) a steep downslope toVérossaz (811 m asl) began. In this village there was a change of runners in the relay race. Myself, not boasting about, also the second half ofthe route planned to overcome personally. First, however, I ate something and rested a bit.

Around 11:30 a.m. I departed for further journey and after five minutes overtookme the first of the professional athletes, who started the run at 9:00 am, means three hours after me!

For a long time I ran roughly at an altitude of 1100 – 1200 meters, encircling the massif of Dents du Midi and heading more and more to the south. 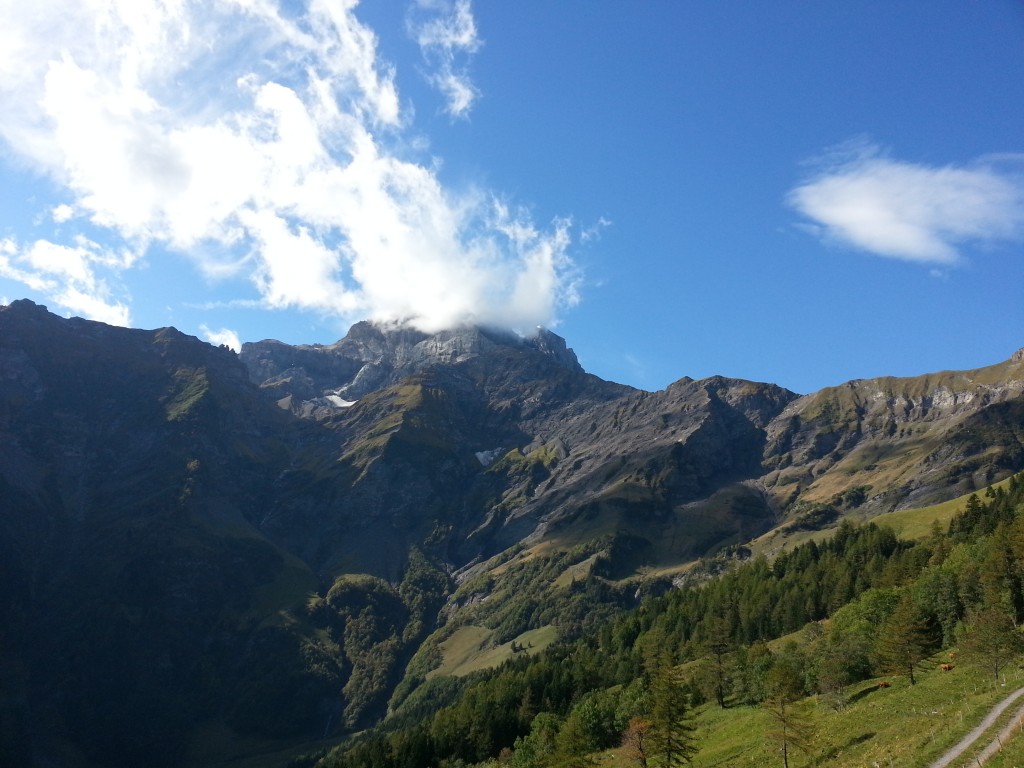 Break on Through (To the Other Side)

I ran across Mex and further by the dam (where was another checkpoint), I got across to the other side of the Torrent de St. Barthélemy creek. Here, at an altitude of 1182 meters above sea level, I began the arduous climb, which ended only over a kilometre above, on the Col du Jorat (2323 m asl).

Lonely, sleepy, pensive,
Cuddles temple to the cold wall,
As though it afraid the breath of the storm.
Silence… The wind doesn’t jog the leaves,

And just rotting stone pine
Rests next to arosebush.
/Jan Kasprowicz, The bush of wild rose in the Dark Spruce Forest/

I must also mention that this timeI took with me the poles and it was a very good decision. Indeed, it is a big relief for the feet and on such a long route with so many hilly climbs, simply indispensable piece of equipment.

During the run down on the other side of the pass, the weather suddenly broke down and to the shelter at the lake Lac de Salanfe (1942 m) I came in the heavy rain. Fortunately, there was another nutrition point. I was welcomed with bread, cheese,dried ham and hot tea. I also completed the supply of water in the tank in my backpack Mammut Lithium Z 20, from which I occasionally have been drinking, through a tube without interrupting the run. It also turned out to bea a fantastic solution. As you can see, I drew conclusions from the mistakes committed in the previous race in Davos. But I made new ones: I hadn’t watch with GPS, so I couldn’t monitor the distance travelled and I hadn’t cloth for glasses, which were flooded with a sweat every now and again.

– Marilla, isn’t it nice to think that tomorrow is a new day with no mistakes in it yet?
– I’ll warrant you’ll make plenty in it – said Marilla. – I never saw your beat for making mistakes, Anne.
– Yes, and well I know it – admitted Anne mournfully. – But have you ever noticed one encouraging thing about me, Marilla? I never make the same mistake twice.
– I don’t know as that’s much benefit when you’re always making new ones.
– Oh, don’t you see, Marilla? There must be a limit to the mistakes one person can make, and when I get to the end of them, then I’ll be through with them. That’s a very comforting thought.
/Lucy Maud Montgomery, Anne of Green Gables/

The rain had stopped and from behind the clouds beautiful sun came out. I was now exactly on the south side of Dents du Midi, which from this perspective looked even more menacing and mysterious. Initially I ran off the shore of the lake and then bounced to the right and through the lunar landscape I have begun another climb.

This one was, however, a bit different from the previous ones, because at some point the route led over 200 meter high cliffs. Chains railings helped somewhat climbing higher, but previous efforts and respect for falling down few hundred meters, intensified tremors of legs muscle when stuck to the rock walls I was passing over the chasms.

Grows lonely on a rock,
Almostthe lastfrom the tribe…
And does not care that simmering waves
Undercut rock from the bottom.

With the mourning full of dignity
Declines over a cliff
And sees at the bottom
A crowd of low-growing spruce.

These easily emerging dwarfs,
Walking in compressed row,
Displaced her from ancient premises
Into the land of eternal snow.

Let a rampant newcomers
Continue crawling all over again!
She sways in the clouds –
And has free sky overhead!

She will never lower to them,
Will not struggle for life –
Still only rises above
On the sloping edges of rocks.

Looks contemptuously from summit
On the triumph of horizontal crowd…
She prefers alone from sky-blue
To plummet crashed by the thunders.
/Adam Asnyk, Stone pine/

Through the Colde Susanfe (2494) and another checkpoint, I get into an impressive Susanfe valley, leading down towards Champery. 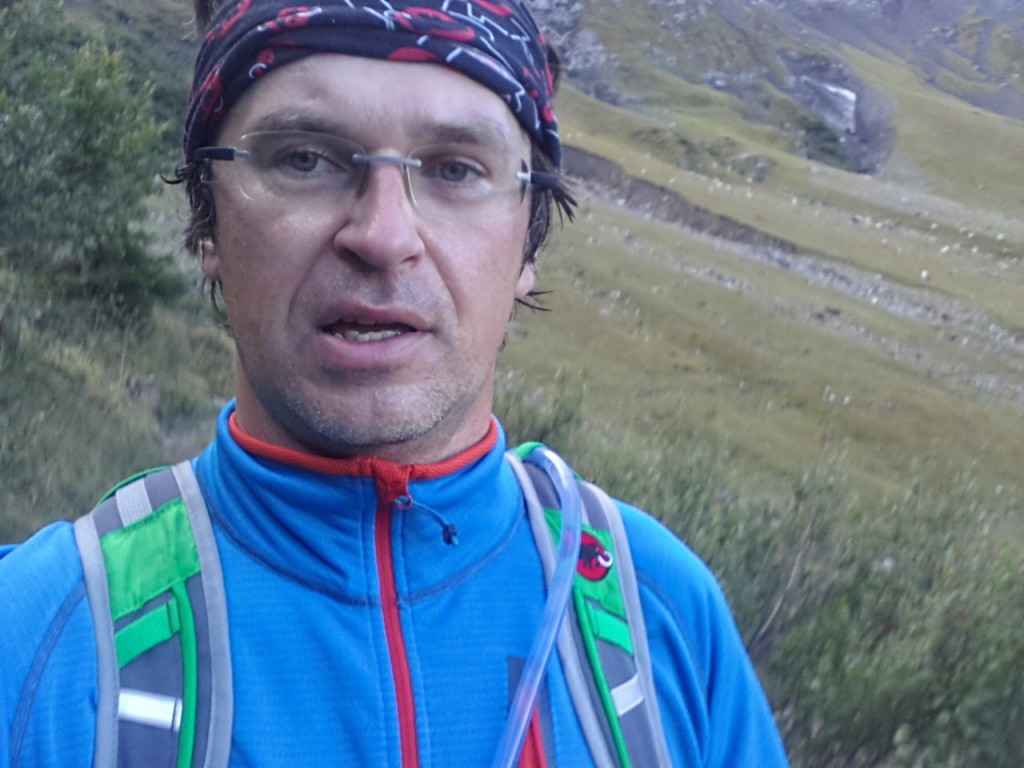 It started to get dark, and to the target there was still far away, which is why the organizers have set more checkpoints on this section of the run. Well done, a fantastic organization. So, through Cabane de Susanfe (2102), Pas d’Encel (1808) and Bonavau (1550) I returned to the Grand-Paradis, where at dawn, also in the dark and with the torch turned on, I have been overcoming first kilometers of run. The circle has been closed, the serpent Ouroboros ate its own tail but I still had about 2 kilometers to the finish. I already knew that I will fit within the time limit, so there was no panic. Shuffling, I have been systematically approaching Champéry…

I crossed the finish line as the last one, 17 ​​minutes before the designated time limit, beating 57 kilometers and 4733 meters of positive height difference.

Man is incapable not being capable of anything.
/Waldemar Lysiak, The Conquest/