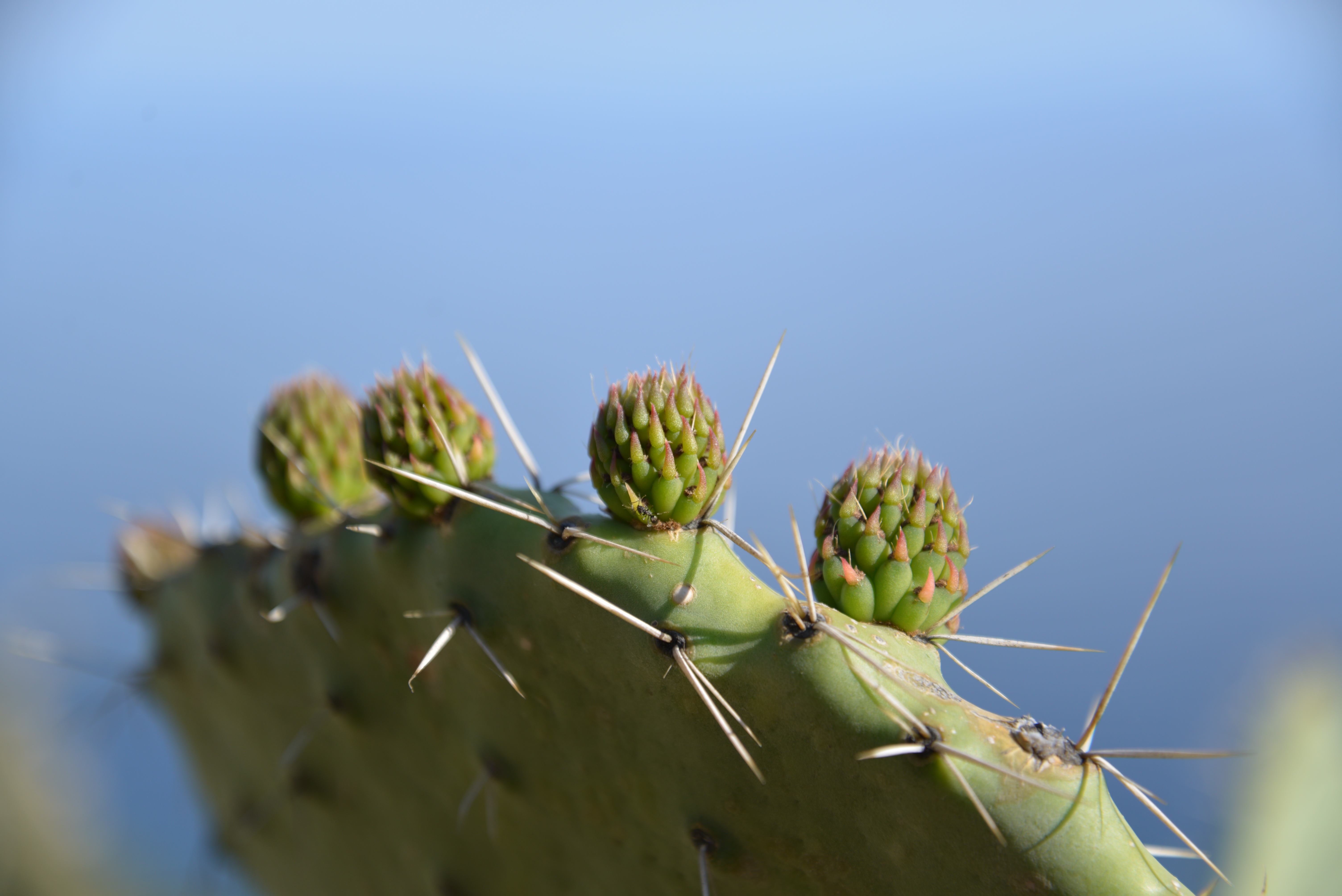 After warming up on Corso Umberto I departed outside the city. Running around Taormina was a wild pleasure, and not just figuratively, but literally. Within a week, I visited many interesting places, but I have not met too many people. In contrary, the animals were with me at every step. 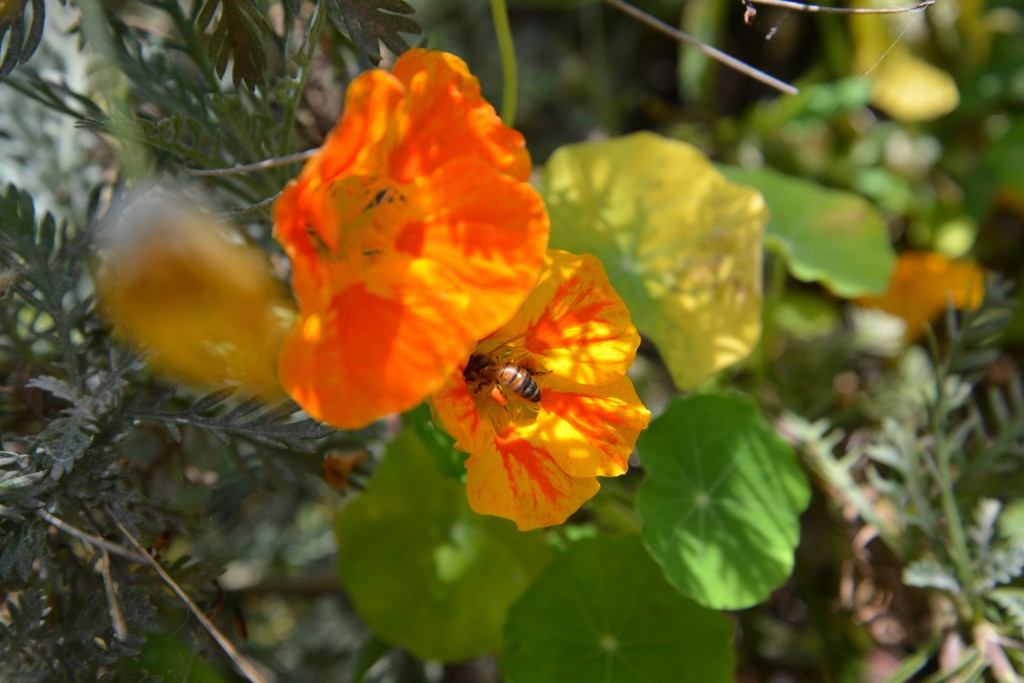 “It exists somewhere, but nobody knows where. The world in which this fairy tale is happening…” /fragment of intro song from children’s cartoon “Maya the Bee”/

My Sicilian cross-country trails I always began with the dawn, that later, during normal business hours explore the city, the Greek theater and other tourist attractions together with family and friends. “When the morning auroras have arisen“, I was leaving the Residence Schuler on Piazza Padre Pio and by Via Otto Geleng I was running up to the intersection with Vico Tauro.

It seems that the cult of Padre Pio is very much alive in Sicily, because in each of the visited churches I saw a painting or a sculpture of his likeness. On the square of Padre Pio there was of course his monument. For Poles, particularly interesting are his relationships with Karol Wojtyła. As results from preserved correspondence and witnesses accounts, Padre Pio knew that young Polish priest in the future will become the Pope. When stigmatic from San Giovanni Rotondo received from Karol Wojtyla a letter of request to pray for the cancer patient Wanda Półtawska, the mother of four children, he said “him we cannot refuse”. After a week, she inexplicably recovered. After receiving a second letter from Wojtyła, this time with thanks for his prayers, Father Pio told to his secretary to keep both letters, because one day they will be “very important”… 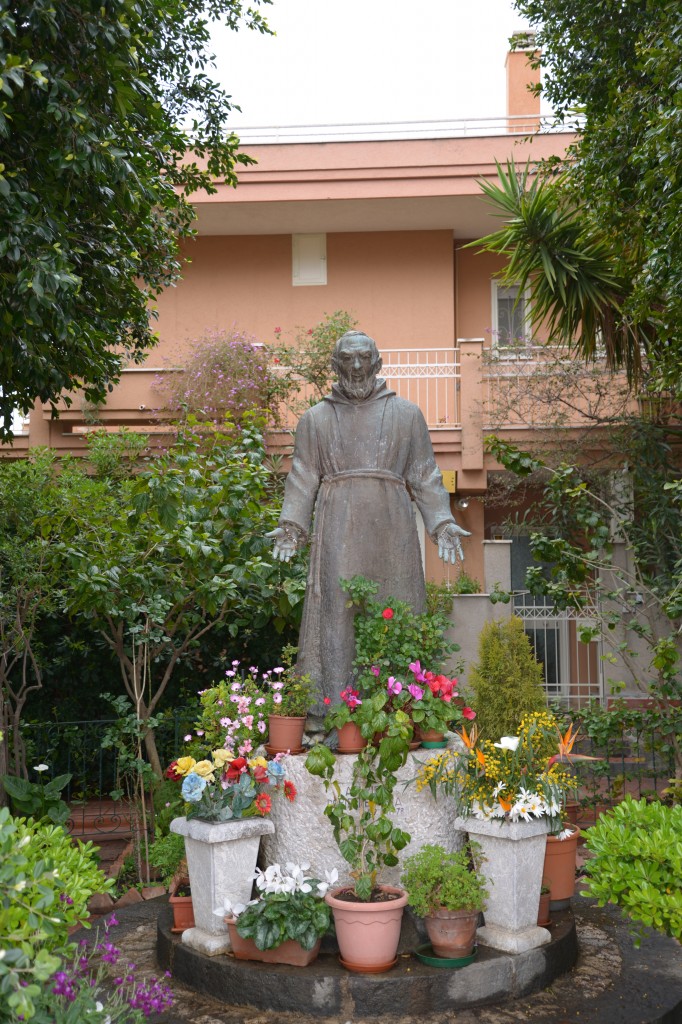 Being still faithful to the principle “teaching through playing”, I have to mention how the street I was running and walking each day got its name. Otto Geleng was a German painter, specializing in the creation of landscapes. He moved from Berlin to Taormina searching for landscapes for his paintings and hit in a perfect location. He began to paint everything what Taormina could offer – sea, mountains, ruins and snow-covered Mount Etna, none of which was known to the public in European cities. When his paintings were shown at exhibitions in Berlin and Paris, many critics accused him of “active imagination”. Then the young artist took offence (we know already this behavior) and invited doubters to Taormina, promising that he will pay all costs if these magical views are not true. Landscapes appeared to be true and critics were impressed by the city. Otto turned out to be a good entrepreneur and visionary. After the reactions of his colleagues, he sensed the oncoming wave of interest in the region and founded the first hotel in the city, becoming the forerunner of tourism in Taormina. 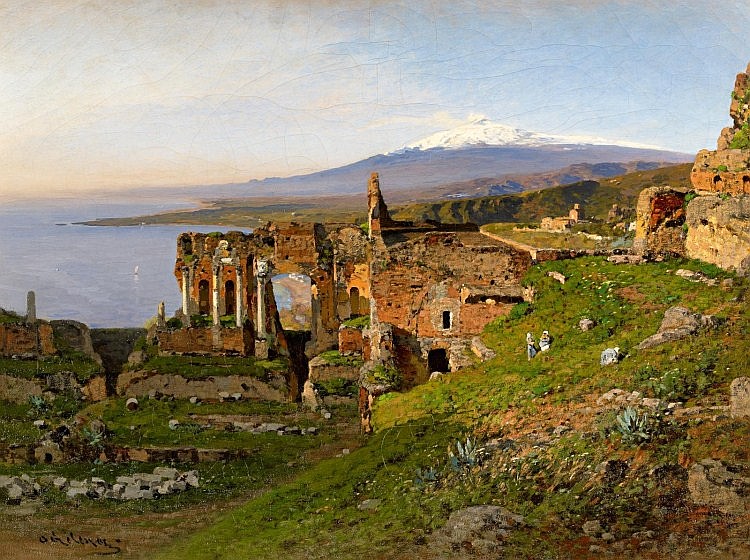 Returning to the run. From the intersection I head up by the stone steps between the houses to the road SP10 otherwise known as Rotabile Castelmola. 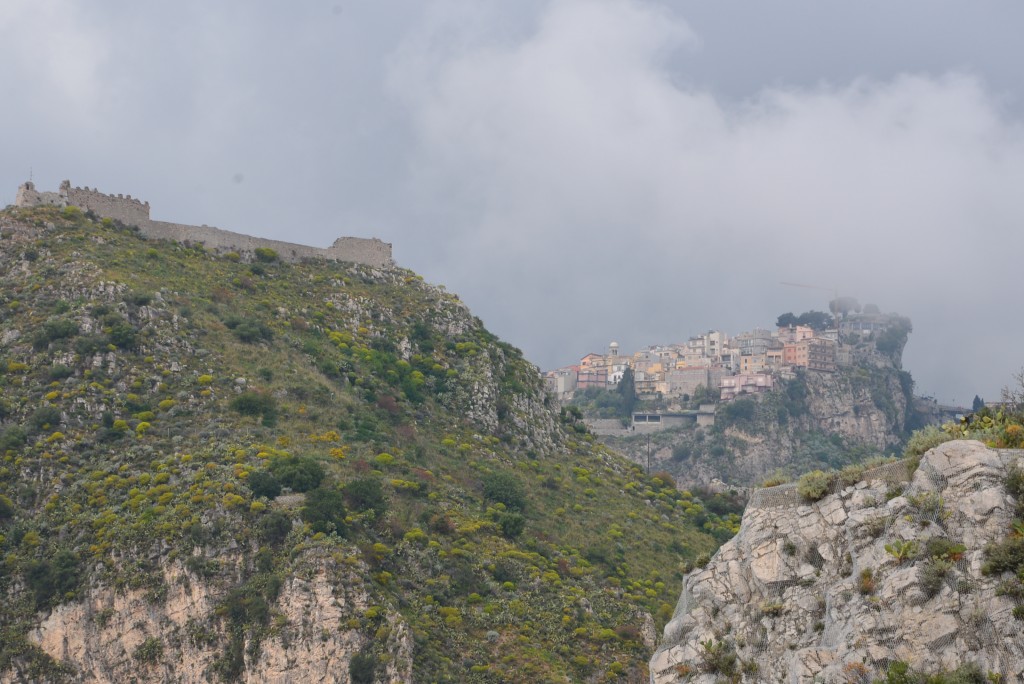 Later through two pedestrian crossings to the next stairways. I run up those stairways to the “hairpin bend” of aforementioned road SP10. This street leads with such zigzags to Castelmola which was destination of my run. However, I resigned from inhalation of fumes from many Vespa scooters speeding up the hill – this pleasure I leave myself for “Roman Holiday” – and I have chosen the route for pedestrians. 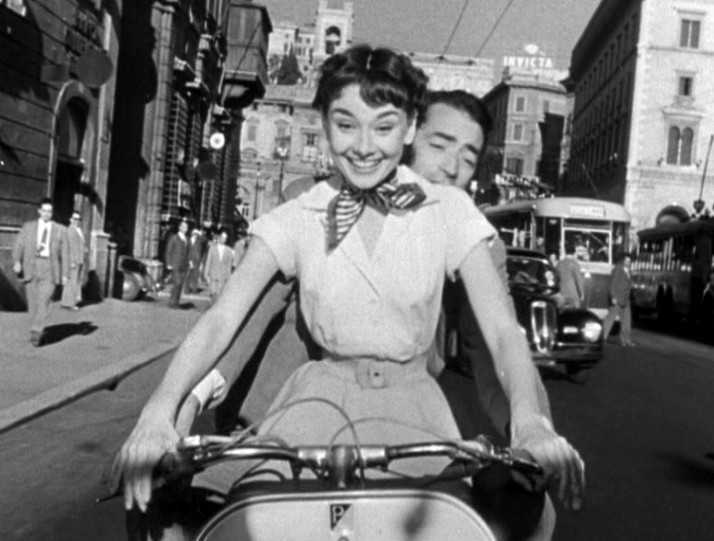 White signpost with the inscription Castelmola signalizes a narrow road guides to the left, where I run into. After about 70 meters I pass small street leading to the left to some property and after another 70 meters I run onto the stone steps departing right up from the road. They are marked Castelmola Porta dei Saraceni 902 D.C. on the yellow board. From this point begins the trail which is beautiful, wild and… neglected. 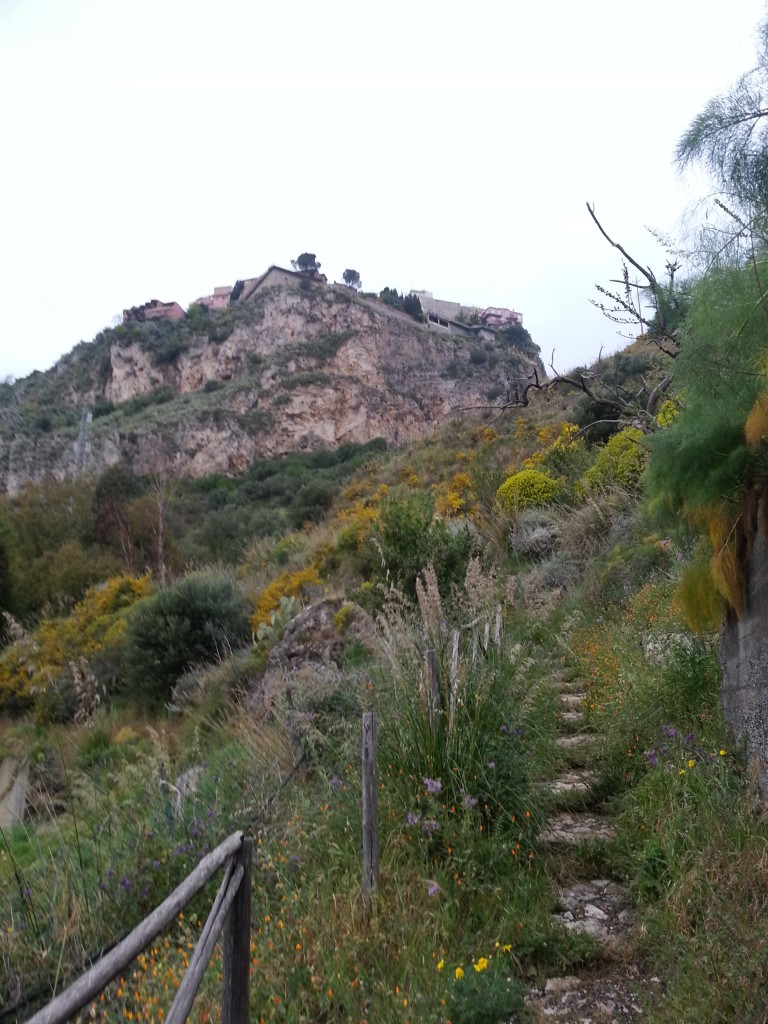 Somewhere there is a path

Among the stone steps grows the grass and wooden railings are broken. It can be seen that the heyday of this boardwalk is long behind it. Nevertheless, I climb this way up the slope of the hill on which stands Castelmola. I have to be very careful and watch my steps, because from time to time even sunken surface happens and it would not be safe to fall in roadside thicket. The route through the woods, in the north-west, ends up after a while and run out into the open area under a large rock on the right side of the path. After about 100 meters I run through the ruins of the gate through which in the year 902 Emir Ibrahim Ahmed stepped in to Taormina, the last Byzantine stronghold in Sicily and destroyed the city. 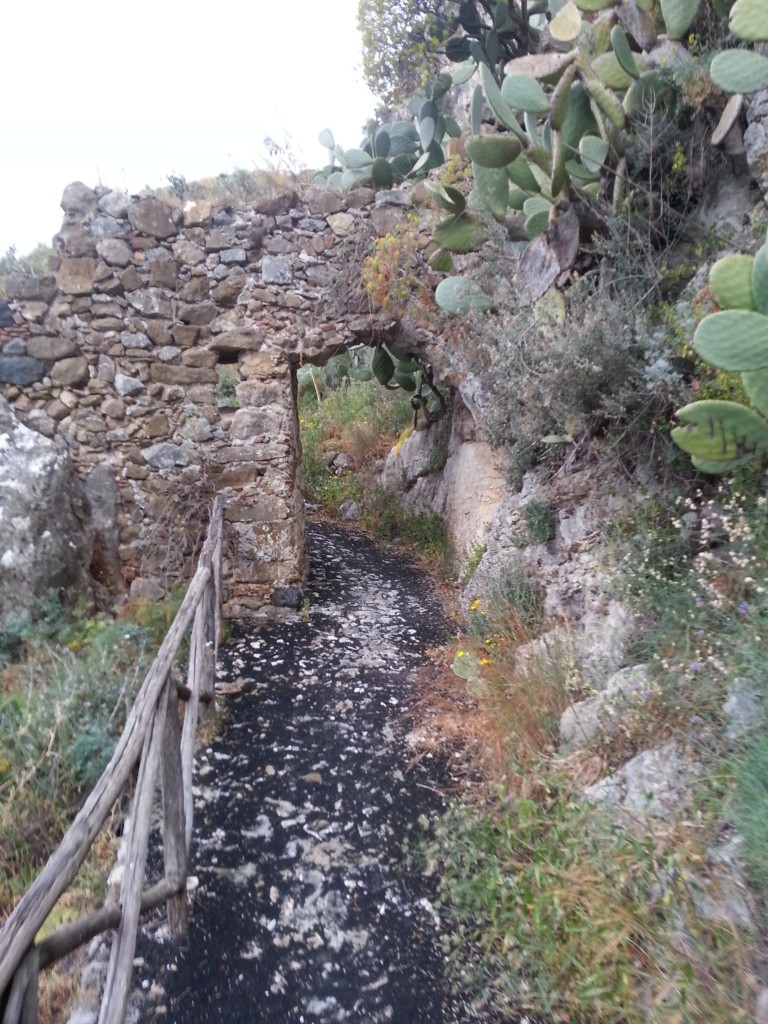 Arabs used the weakness of the Byzantine Empire and from 7th century were organizing attacks on the southern coast of Sicily, which were continued without much success in next centuries. In the year 827 landed in Mazara with more than 10 thousand warriors, with the specific aim to get the whole island. Taormina, with its location long resisted the attacks of invaders, until the Emir entered the city from the north, through the Cuseni Gate, then called Saracen Gate (Porta dei Saraceni), to remember this tragic event. The city was plundered and destroyed, the inhabitants murdered and only young girls were spared, but… sent to harems in Baghdad.

Path leads from the gate “west by southwest”. On the road there is gravel from minor volcanic rocks which hurts shoes with its sharp edges. After 90 meters, the path follows the north, in the direction of Castelmola and climbing with zigzags up the slope. From time to time accompany me nice but destroyed lanterns, imitating the style of “Belle Epoque”. 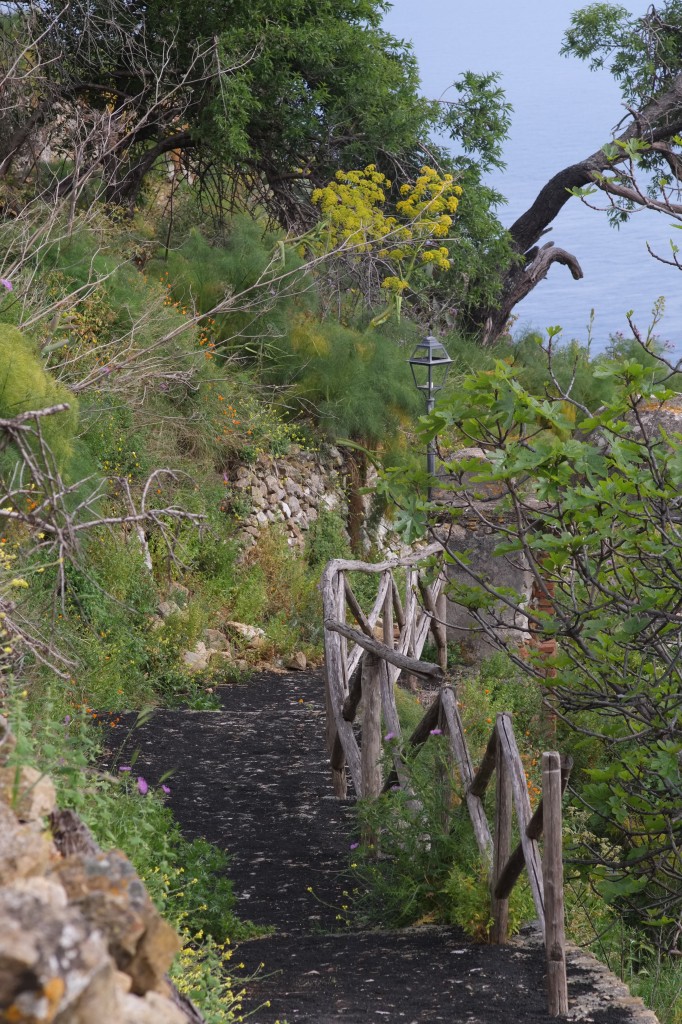 Railing for renovation to be paid by Swiss Confederation

I run further up the hill, ignoring the technical difficulties, and even enjoying the situation that I’m alone and not barging into other people like in Tatra Mountains, where even climbing Rysy, the highest peak in Poland (2499 m), I have to stand in a queue. 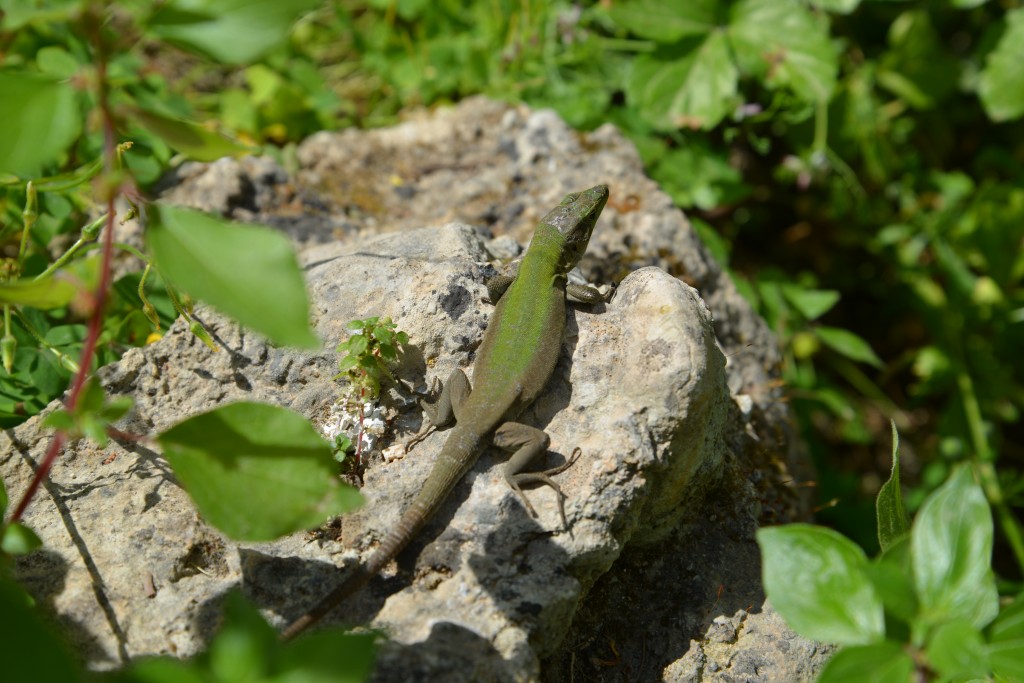 “I am the Lizard King I can do anything”

At the end of climbing to Castelmola, there is more vegetation again. After a moment, small path leaves down to the right and leads to the chapel Chiesa San Biagio from I century. 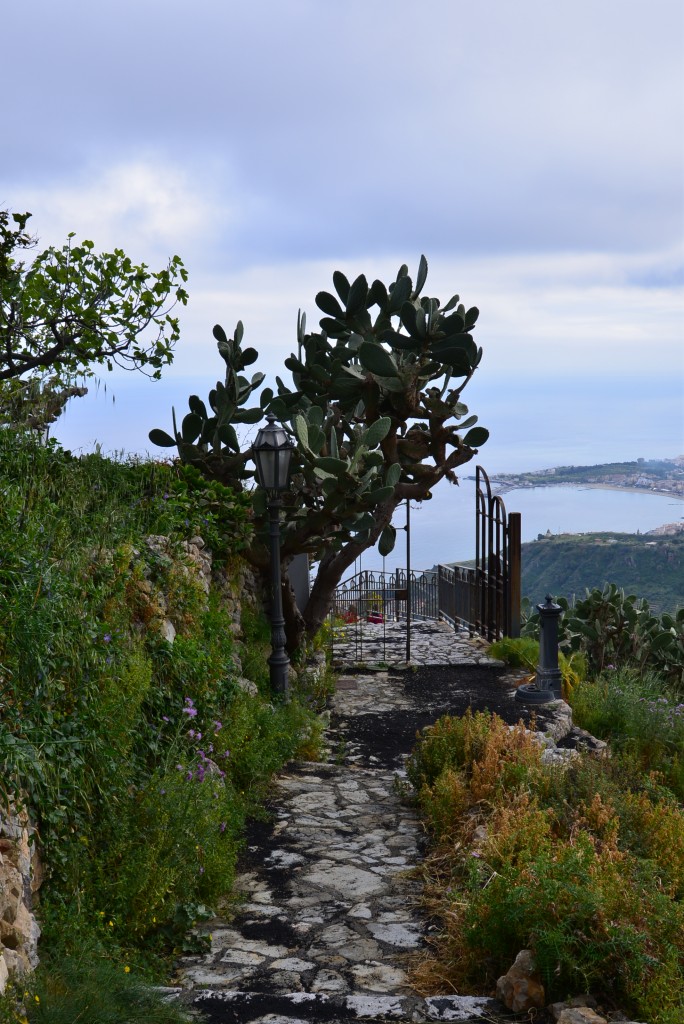 There’s still time to change the road you’re on 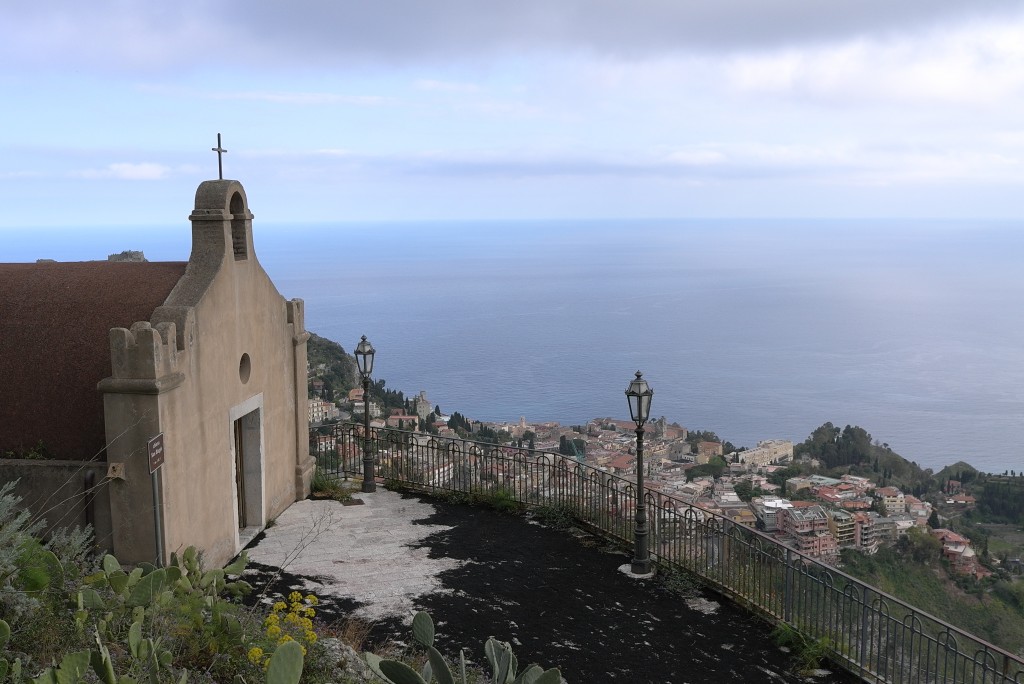 In the summary, the route heyday is behind us and definitely could use its renovation. I’m sure, that when Sardinia will join the Swiss Confederation as 27 Canton (Canton Marittimo), Sicily will take after it and funding of tourism will be one of the main points of the investment plan for the overseas dominions of Switzerland.

Into Castelmola I run from the south through of Via Luigi Pirandello. Now it is important to improvise, because the amount of narrow and winding streets is so large to keep the exact route. To follow exactly my way could be stressful and stress should be avoided. Generally, need to head up, to the north-north-east until the big square and the observation deck. With curiosity, I climb up to the castle and… I found the gate closed for renovations.

From the observation deck I run down by already known road SP10 and after about 100 meters I turned right, down the stairs to the parking lot leading to the boardwalk descending with zigzags down towards Taormina. Following this route I run again (phew!) to the road SP10. For a moment, I’m running down the street and after 250 meters, turned left diagonally, in Via Madonna Rocca leading up the hill to the Sanctuary of Our Lady on the Rock. 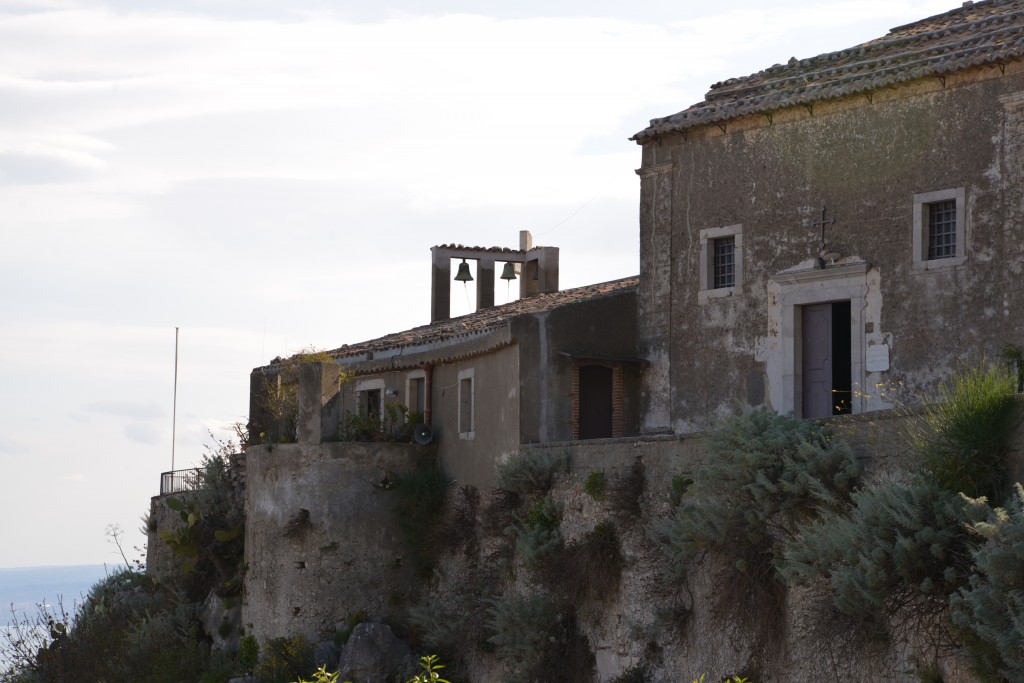 I would not be myself if I did not run even higher, to Castello Saraceno through the destroyed stairs no longer protected even with broken railings. And here again, unfortunately unpleasant surprise – closed for refurbishment. Switzerland, please come!

So, I went back to the shrine and started running down the Way of the Cross (passione strada), from which a beautiful view of the bay and Piazza IX Aprile expands. 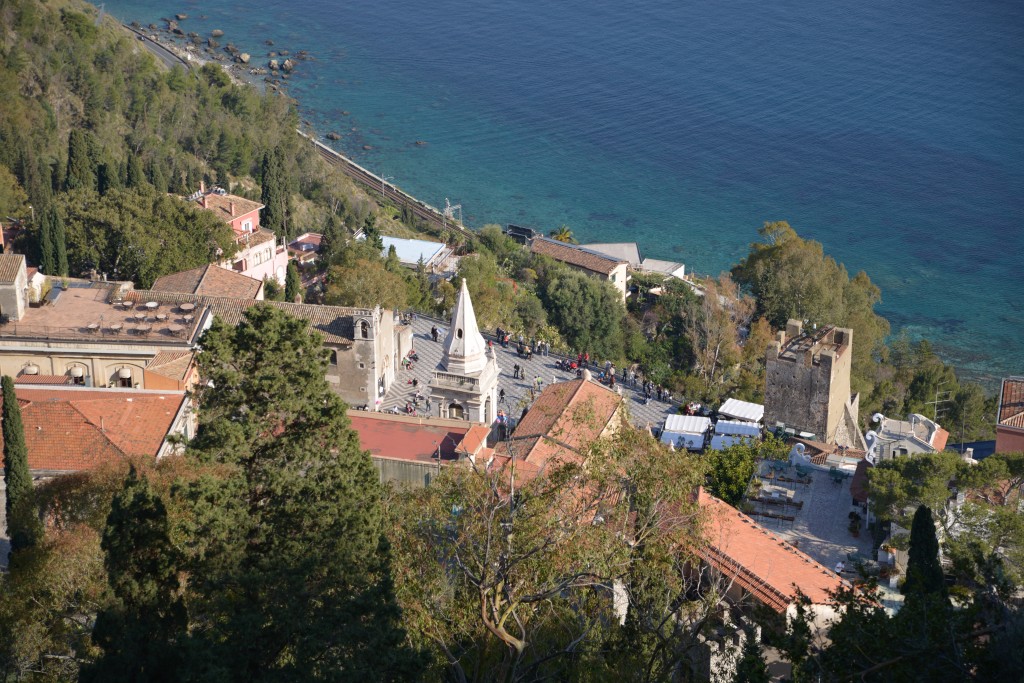 After a few minutes I found myself in the center of Taormina and again on… Corso Umberto – is this enchantment? Actually, it is a good idea and I will buy a few lemons for tea… 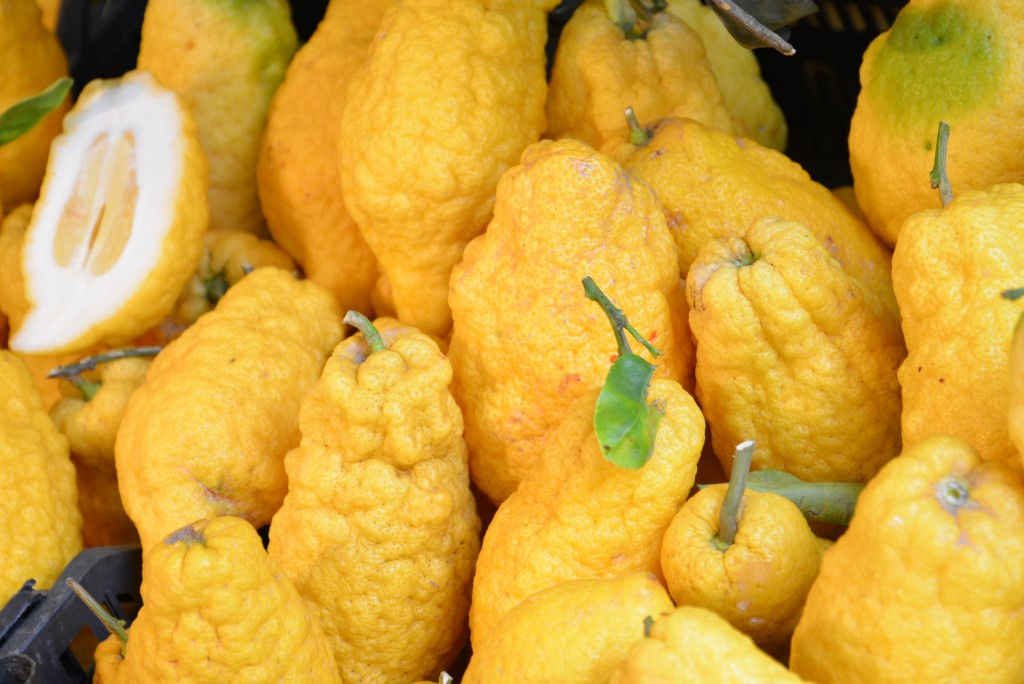