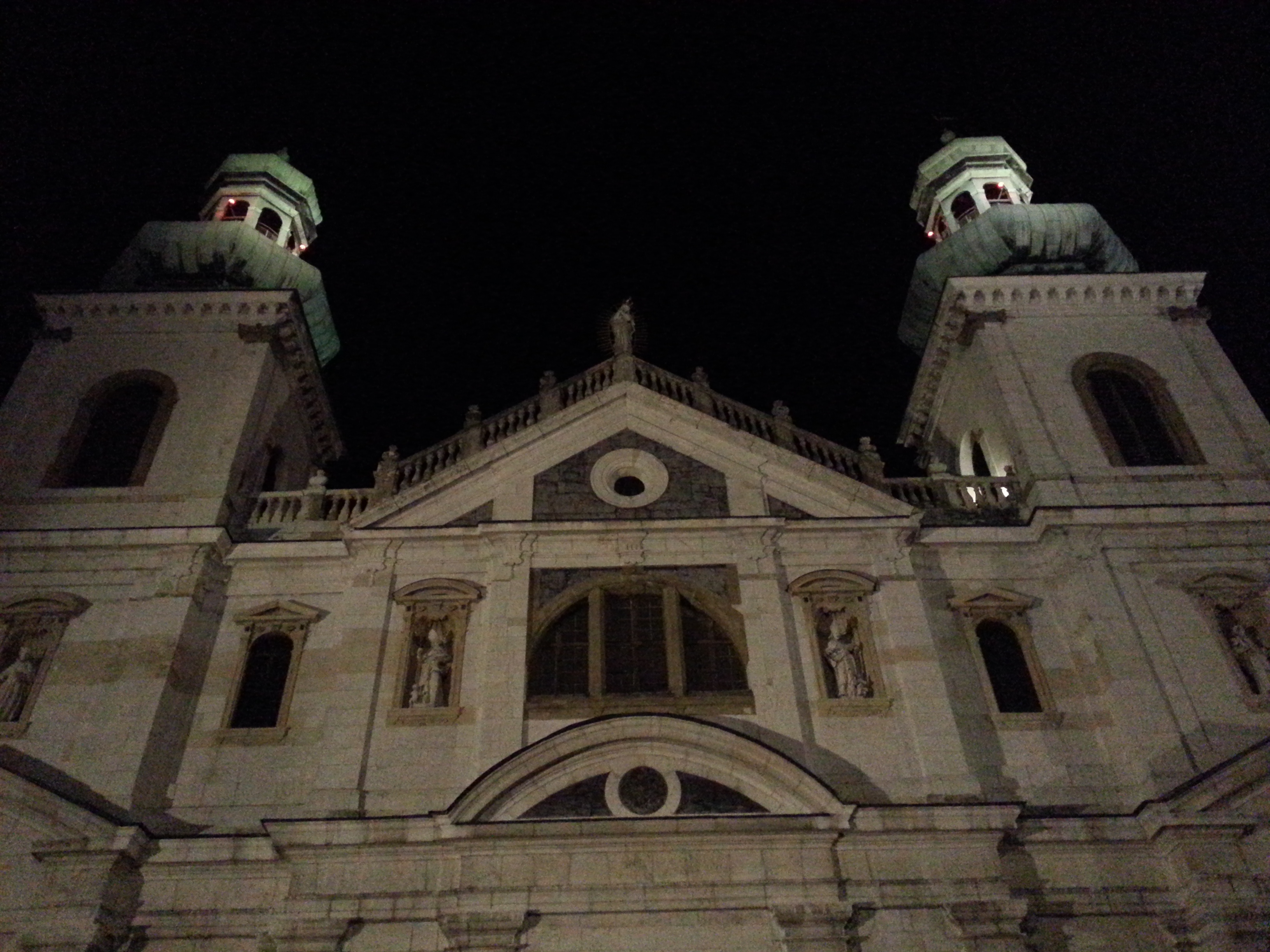 Every year our family attends midnight mass. This year our choice was the church of the Assumption of the Blessed Virgin Mary in Bielany near Cracow. Unfortunately after digesting 12 dishes during supper, blood had pumped into my stomach and intestines, and this of course, had a negative impact on all the other parts of my body. My legs did not want to move and my brain was drifting into the arms of sleep.

Then he returned to his disciples and found them sleeping. «Couldn’t you men keep watch with me for one hour? he asked Peter. Watch and pray so that you will not fall into temptation. The spirit is willing, but the flesh is weak».

Therefore, we set out; not on foot for perhaps, a run, but by car. Despite the enthusiasm, you need to use common sense. Besides, others had already spoken out strongly against a run. So we parked on Hikers Alley, located at the foothills of The Wolski Forest and from there, we made our way on foot to the Silver Mountain. Darkness…

there is no road neither the barrow ahead;
I look up to the sky, searching for stars, the guides of my boat;

I recognized the constellations of Orion, Great Bear and Cassiopeia.

After a short march through The Branches Alley, we stood in front of the first gate. On a narrow street between the walls of the monastery came to the wicket. There were already a lot of people waiting. Like us and the hermits of the Silver Mountain, they also wanted to welcome the Child. 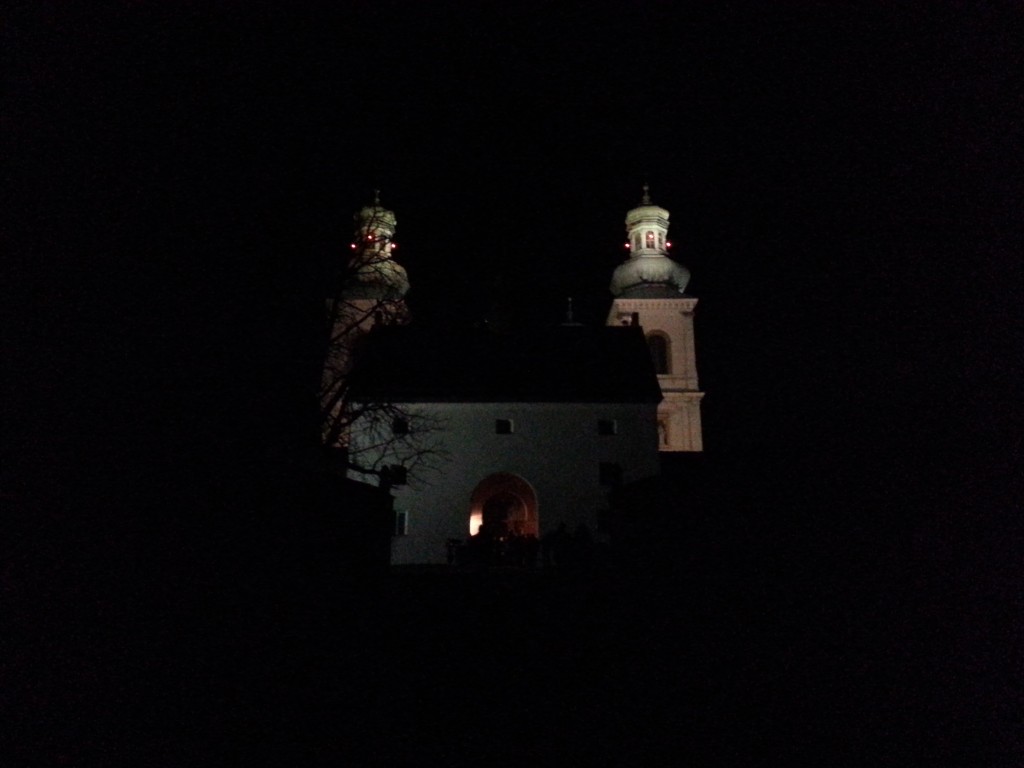 Hermitage (Latin eremitorium – monastery of monks living in seclusion) on Bielny was founded in 1604 by the grand marshal of the crown Mikołaj Wolski.

Legend has said that he was a real sinner, dabbled in black magic and alchemy, but at the end of his life he stroked back and within the reparation for the sins brought to Krakow Camaldolese monk from Italy. The monks chosen a place for the seat, which unfortunately did not belong to Wolski, but to Sebastian Lubomirski, Castellan of Wojnice who did not want to abandon the site. Wolski proved to be an excellent psychologist and applied the best method for the second Pole in the style of the following joke:

The devil grabbed a German, a Frenchman, an Englishman and a Pole.

He told a German jump into the abyss but German answered he will not jump, so the devil said, “But these are the orders”. Then German shouted, “Jawohl Herr Devil!” and jumped into the precipice.

The Englishman was the next and obviously did not want to jump. He was not interested in fulfilling orders or in fashion, so the devil said, “Jump for the queen,” and then Englishman jumped into the abyss singing,” God save the Queen”.

So Wolski organized a sumptuous feast, where in addition to Lubomirski he invited important persons of Cracow. At the end of the feast, when the guests were already in good mood, Wolski talked about his troubles with finding a place for the Camaldolese. Then castellan Lubomirski, said, “What, I will not jump?!” and signed a deed of gift. In gratitude Wolski gave him silver vessels used during the feast, which cost a lot because it offset the value of donated land. To commemorate this event, the hill became the Silver Mountain.

Thanks to that event we were able to wait at the monastery wicket in this Silent Night. Shortly before midnight, the brother porter opened the door and we walked through the grassy courtyard to the baroque church. Just beyond the entrance we trampled sinful remains of Marshal Wolski buried just under the floor (this was his request). We sat down in the icy benches in an unheated church and Midnight Mass has begun. No organs, just singing of monks and the believers who came. An unforgettable experience. Sermon was simple, sincere, without gestures, suspending voice and finger-pointing. You can see that monks are the people of prayer and contemplation. They were not prepared to receive daily contact with the believers in the church. Most important, however, was what was evident – there was faith, there was hope and there was love. And there were beautiful Polish carols.

What hast thou, the heaven better?
God abandoned its happiness,
Here to share the trial and sorrow,
Of His poor, beloved people.
Suffered much and suffered dearly,
For we all who were guilty sinners,
And the Word became flesh
And dwelt among us.

/Franciszek Karpinski, Song of the Nativity of the Lord/

When we left the church after the mass, the stars twinkled above us and below the lights of over the millennial city. Residents were calmly sleeping, eating or … returning from Shepherdess.

Cracovians, do you know thanks to whom your city is safe and intact for so many centuries? Camaldolese monks are your lightning rod.

/John Paul II during his visit to the Camaldolese in 2002/