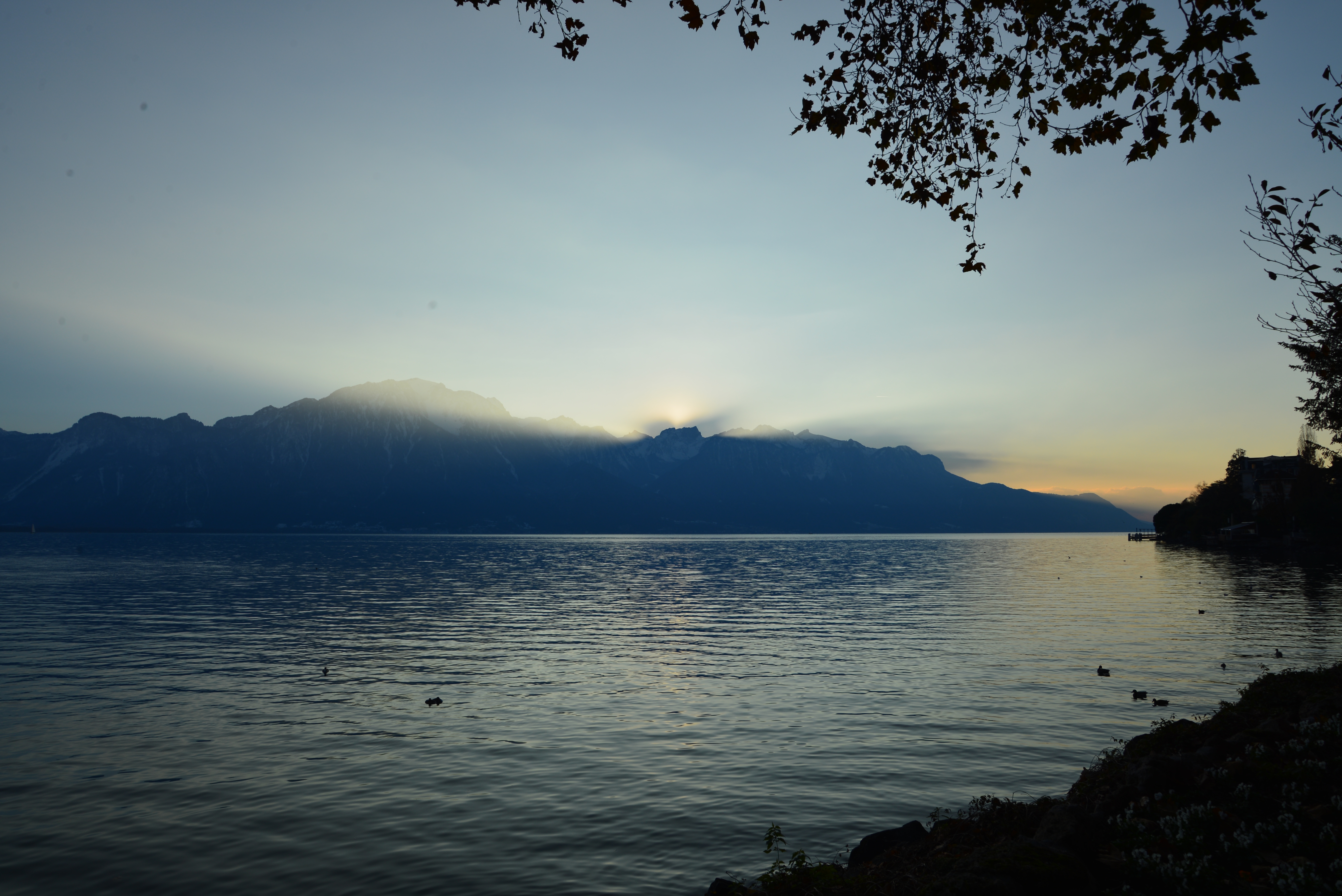 Lake Geneva, however, has the magic that charmed many prominent artists before me. Hmm, I think it sounded a little too pompous. 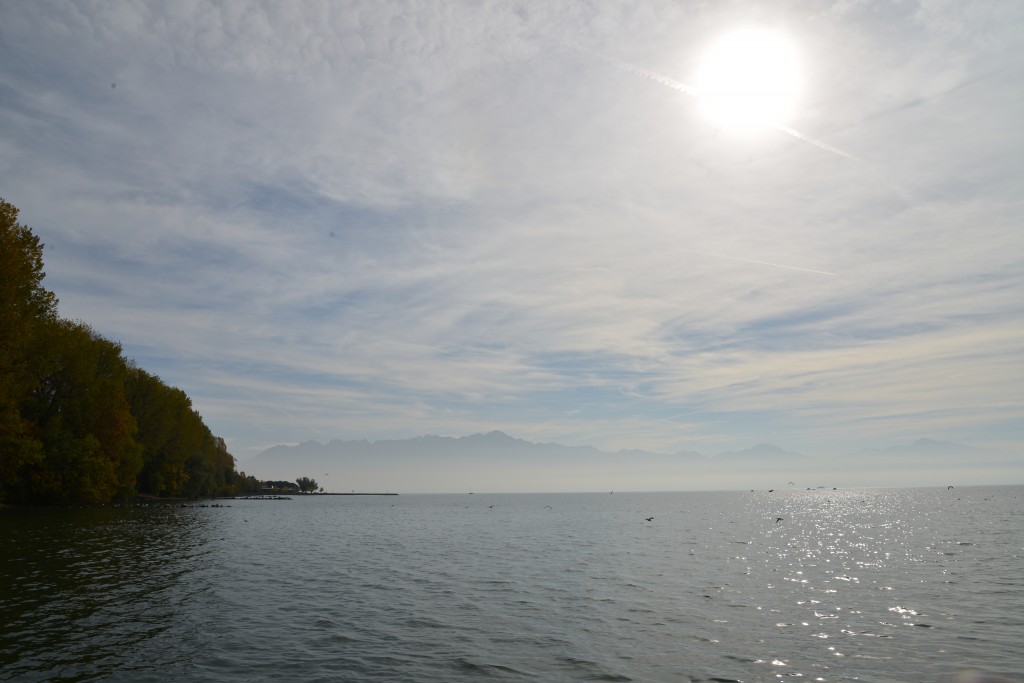 Anyway, on the shores of the lake “Lausanne lyrics” were written by Adam Mickiewicz, in the near Geneva, Juliusz Slowacki created “Kordian” and “Balladyna”. In Vevey Henryk Sienkiewicz and Charlie Chaplin lived the last years of their lifes and in Morges for about 40 years lived Ignacy Jan Paderewski. Lac Leman area impressed also Karol Szymanowski, Cooco Chanel, Audrey Hepburn and Yul Brynner.

And the Spirit of God was hovering over the face of the waters and inspired Baron Pierre de Coubertin to found the International Olympic Committee headquarter in Lausanne.

This time I started my trail in Ouchy, a popular place of entertainment and leisure for both residents and tourists. This small fishing port, after joining the borders of the city in the nineteenth century, transformed over the years into one of the most prestigious and recognizable places of Lausanne. Exclusive hotels were build here, like Beau-Rivage Palace, Château d’Ouchy and Mövenpick, numerous restaurants and… two grocery stores open daily until 22:00, which is a rarity in Switzerland. On the Avenue d’Ouchy, a street that runs from the lake up the city, the shop “Bazar d’Ouchy” is located, in which for more than 100 years, you can purchase all Swiss gadgets that you can dream of, and in particular the cuckoo clock, which is sometimes the object of malicious jokes:

In Italy, for thirty years under the Borgias, they had warfare, terror, murder and bloodshed, but they produced Michelangelo, Leonardo da Vinci and the Renaissance. In Switzerland, they had brotherly love, they had five hundred years of democracy and peace – and what did that produce? The cuckoo clock.
/The Third Man (1949), by Carol Reed/

I think it is just jealousy for the peace, order and prosperity, which over the years Switzerland has established using a direct democracy.

Start of the run I set up on Place de la Navigation, near the port and carousel for children, at four stone blocks. They are here not just for decoration. These monoliths symbolize the four winds blowing on Lake Geneva and are the part of an artistic project, which took first place in the competition for the redevelopment of Place de la Navigation in 1991. The second part of the sculpture is semicircular anemometer height of 20 meters, located 150 meters away, at the entrance to the port. 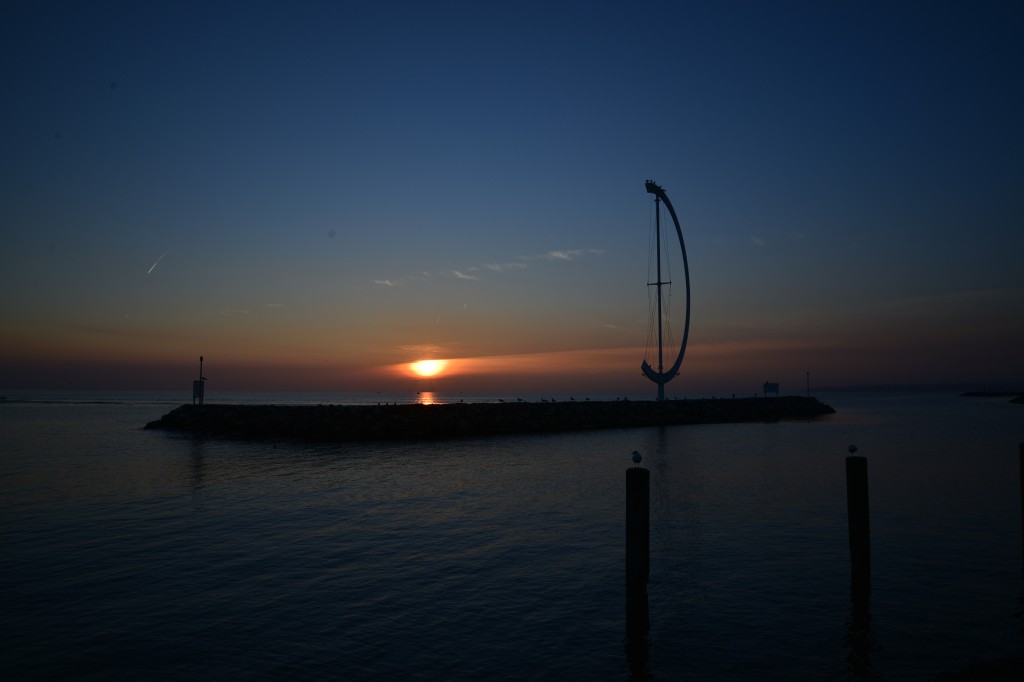 It rotates in response to the gusts of wind. Standing in front of each stone block, with the feet on the wheel with the name of the wind and looking through the cut in the monolith semicircle at anemometer, you can identify which of the four winds is blowing at the moment. 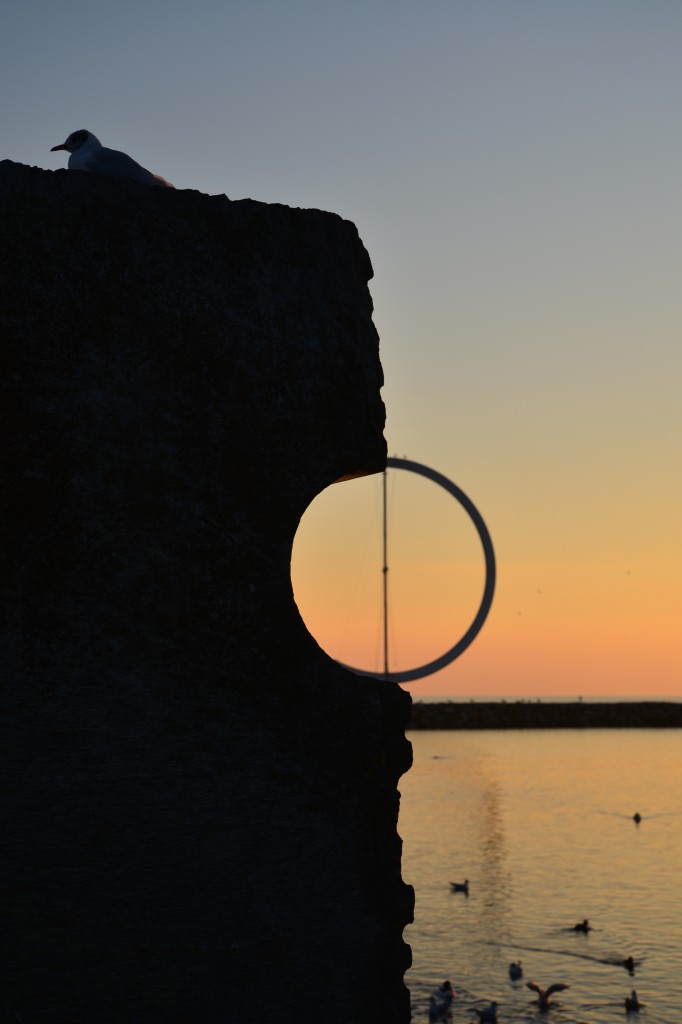 Blowing in the wind

I’m moving right, to the west by the quay and after about 200 meters, turned left to be all the time near the water. I run between the port and the large building, where oriental restaurant and a curling hall are located. At the end of the port I turn to the right and run into huge industrial quay, under big cranes for handling sand, gravel and stones. On the left side, the other side of the harbor basin steamer “Italie” waiting with the hope for a major renovation to join the fleet of “belle epoque”. 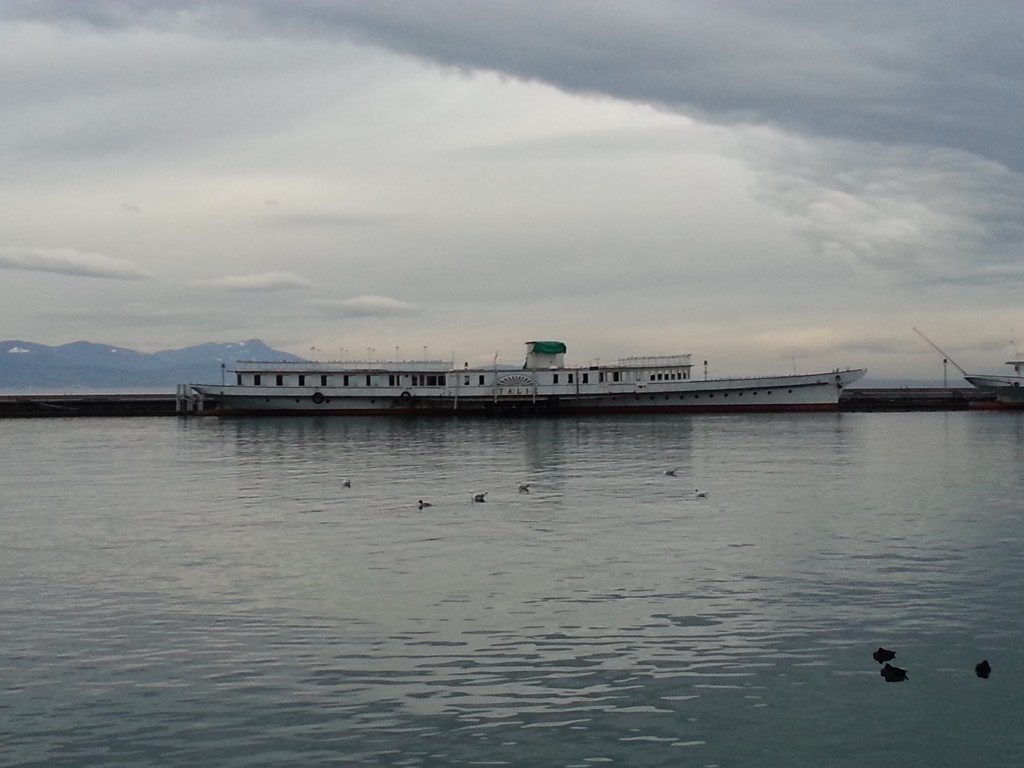 Ships in a total of eight all were built between 1904 and 1927 in the plant of Sulzer Brothers in Winterthur. Currently belong to the “Compagnie Générale de Navigation” (CGN) from Geneva:

I continue to run in a westerly direction and when reaching the fence separating beneath a paid beach Bellerive, I turn:

a) from October to May to the left – and through concrete embankment on the shores of the lake to the asphalt walking alley in front of Theatre de Vidy;

b) from June to September to the right (as during summer period, the promenade at the lake is closed and becomes part of a paid Bellerive beach) – and along the Avenue de Rhodanie reach the end of the fenced area, I turned left and I run towards the lake having Theatre de Vidy on the right hand side.

I continue run via the alley to the west, I reach the port of Vidy, I run on the shore and at the end I turn to the left, as in the port of Ouchy to run all the time close to the water, and when the port is over, I turn to the right. I pass the pyramid built for the Swiss National Exhibition in 1964, at high steel monument I turn to the right and reach the main pedestrian path. I turn to the west, to the left. After a few dozen meters, I turn right to the Pierre de Coubertin stadium. It is the site of many sports events, among others, here ends up Lausanne 20 km run. In 2013 the old red tartan surface of the track was replaced by the new blue one. I run the track to the right, like on the roundabout and exit on the opposite side. I cross Rue du Vidy and a parking and through the gap in the trees run to the meadow where you can see the remains of a Roman settlement Lousonna. 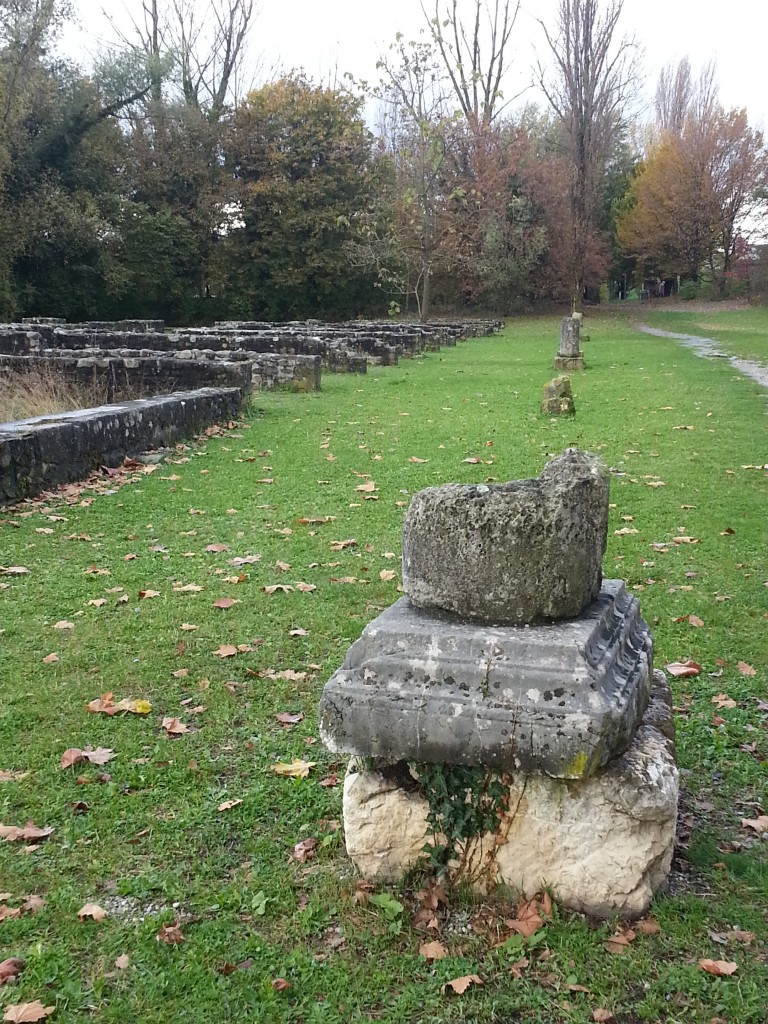 I run diagonally through the Ruines romaines and again find myself on Rue du Vidy, on which I turn left. I cross to the roundabout, where by turning to the right, under the highway, you can reach the Musée romain but I’m running to the left, under the windows of the International Olympic Committee. 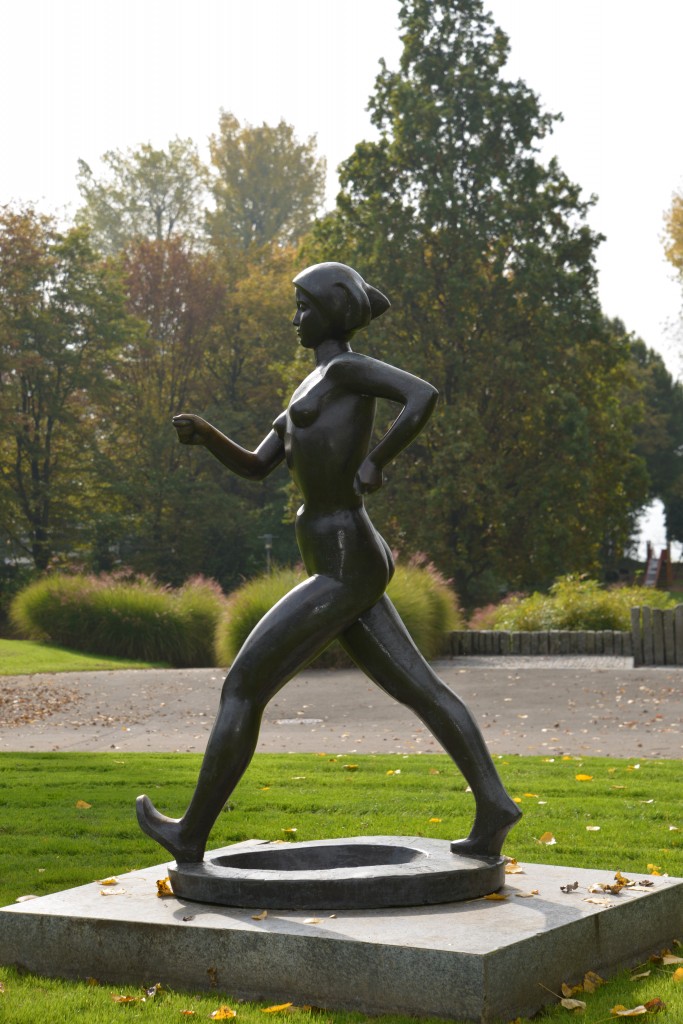 I realize that I am not the fastest runner in Lausanne, but doesn’t matter. Baron de Coubertin said that the fight itself and the competition is more important than victory:

The important thing in life is not the triumph but the struggle, the essential thing is not to have conquered but to have fought well.

How easily the same sense expressed polish band Skaldowie in the song “The Bunny”:

Therefore I am chasing…

From the Olympic Committee there are three possible routes:

a) run to the lake and continue on the main promenade;

b) run straight the alley along the street and sewage treatment plants;

c) or run into the woods and for some time use the fitness trail.

Goal is one – to cross the river La Mèbre. Yes, this is the same river I already described before in the blog. I usually choose the fitness trial, because the sawdust substrate is gentler for the joints than asphalt. Parcoursvita leads me from station to station and on one of them I want to draw attention to the historical curiosity.

At stop number 4, behind the bushes you can see a stone obelisk on a small mound, surrounded by a hedge. It is clearly visible in autumn and winter, while in spring and summer, it is covered by the wall of greenery. I advice to go through the scrub and read the inscription on the monument. This is the place where major Davel, soldier and patriot of Suisse romande was beheaded. He wanted to bring an independence to the canton of Vaud, occupied at the time by the Bernese. He was arrested, tortured and beheaded in Vidy on April 24, 1723. 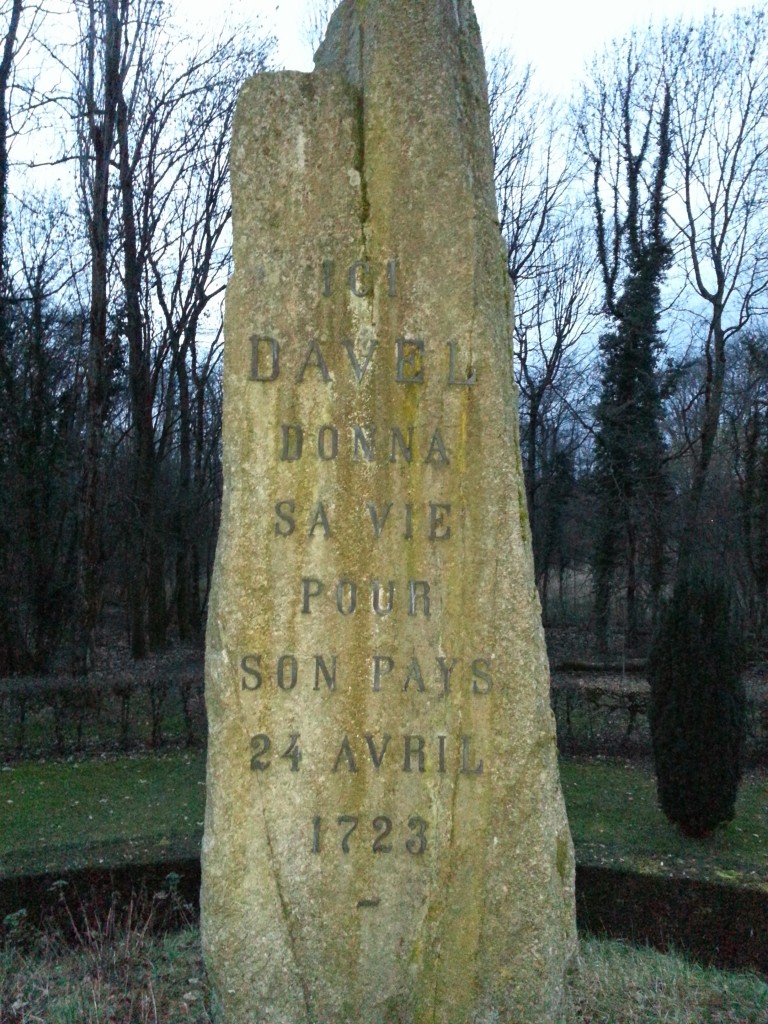 Place of execution of major Davel

I’m running further on a fitness trial, until the asphalt alleys and river that I cross and through the sports premises of the university and the polytechnic, I join the main promenade of the lake. I run through the Petit Port of Saint-Sulpice, I pass the barrier, few meters further turn left and through the playground I reach the path over the lake. You can continue to run straight by the street, but I usually go via scenic area.

Path at the lake leads to the Beach of Pelican and further, up to the point where private properties come down close to the water. I turn then to the right in the gravel alley and in front of the restaurant L’Abordage join a main road and turn left.

Now the trail leads all the time by Avenue du Leman up to the Parc du Débarcadère in Saint-Sulpice. I run next to the playground and meadows, I follow the road which goes right behind the restaurant Le Débarcadère and reach the church of St. Mary Magdalene, which is the target of my trip. The church was founded by the Benedictines of Cluny in France at the turn of the eleventh and twelfth centuries. It became a Protestant church after the Reformation came into the canton of Vaud. 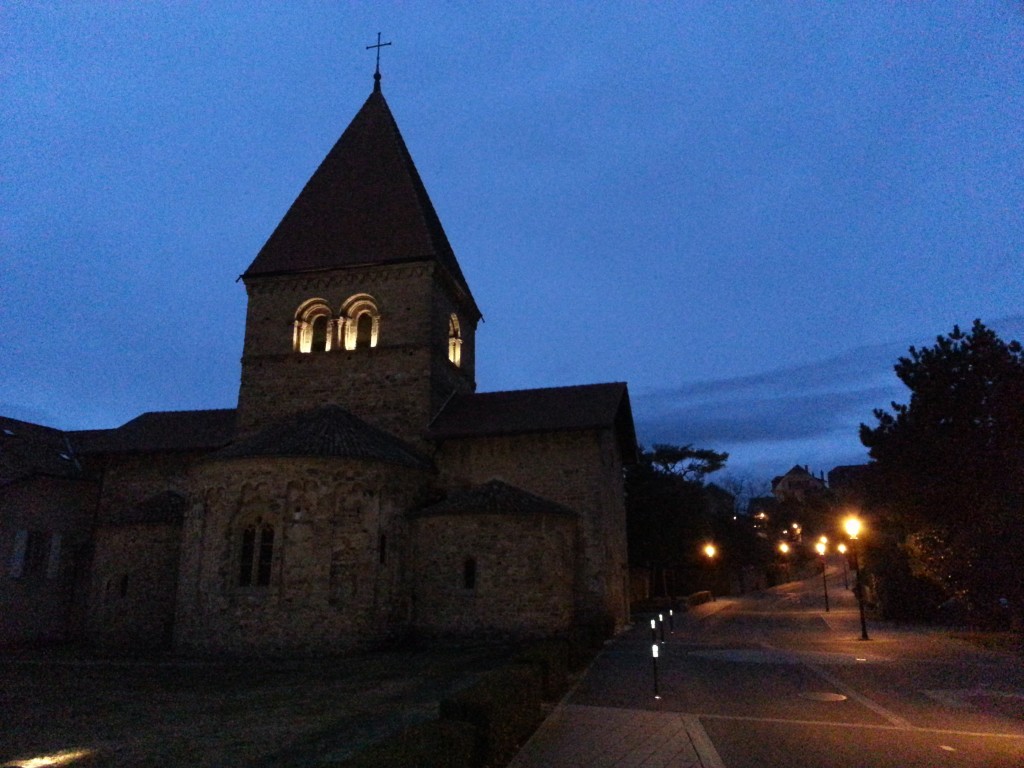 You can run forward towards Preveranges and Morges, but that’s a topic for another story…

I’m coming back more or less the same route to Ouchy, modifying a little, depending on the mood and comfort (variant a, b or c or … else). Planning is very important, but you have from time to time introduce deviations, break out of frames, improvise:

Do not go where the path leads, but where it does not exist and leave a trail.
/Ralph Waldo Emerson, American poet and essayist of nineteenth century/ 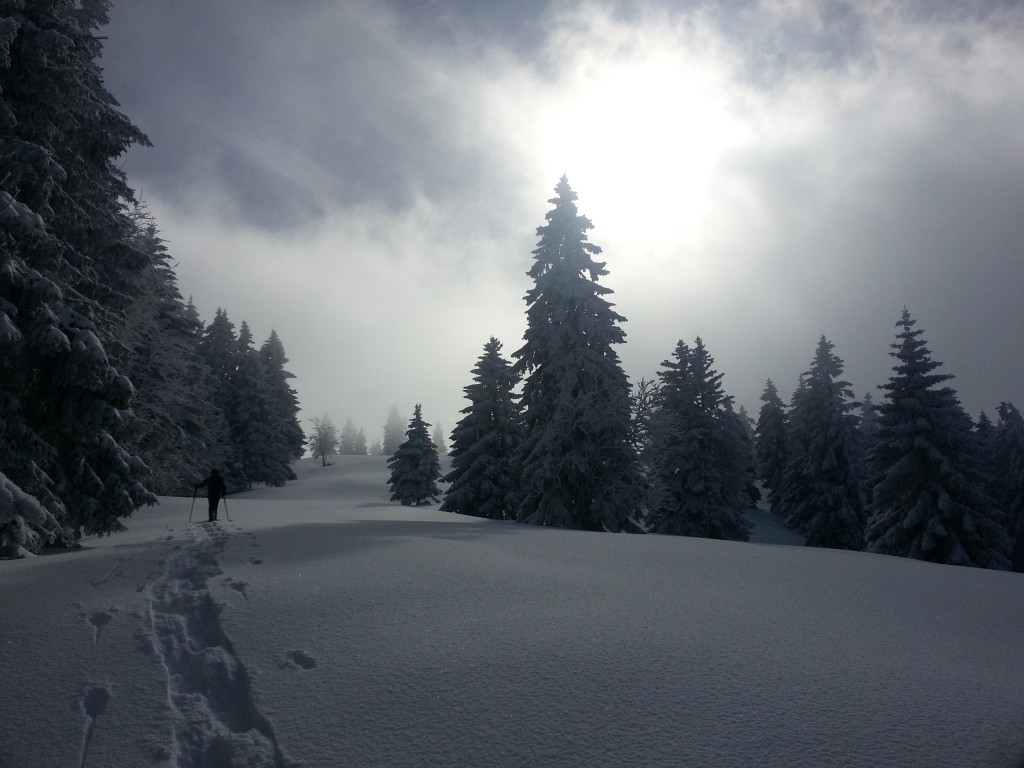 Steps into the unknown

One thought on “From Ouchy to Saint-Sulpice”