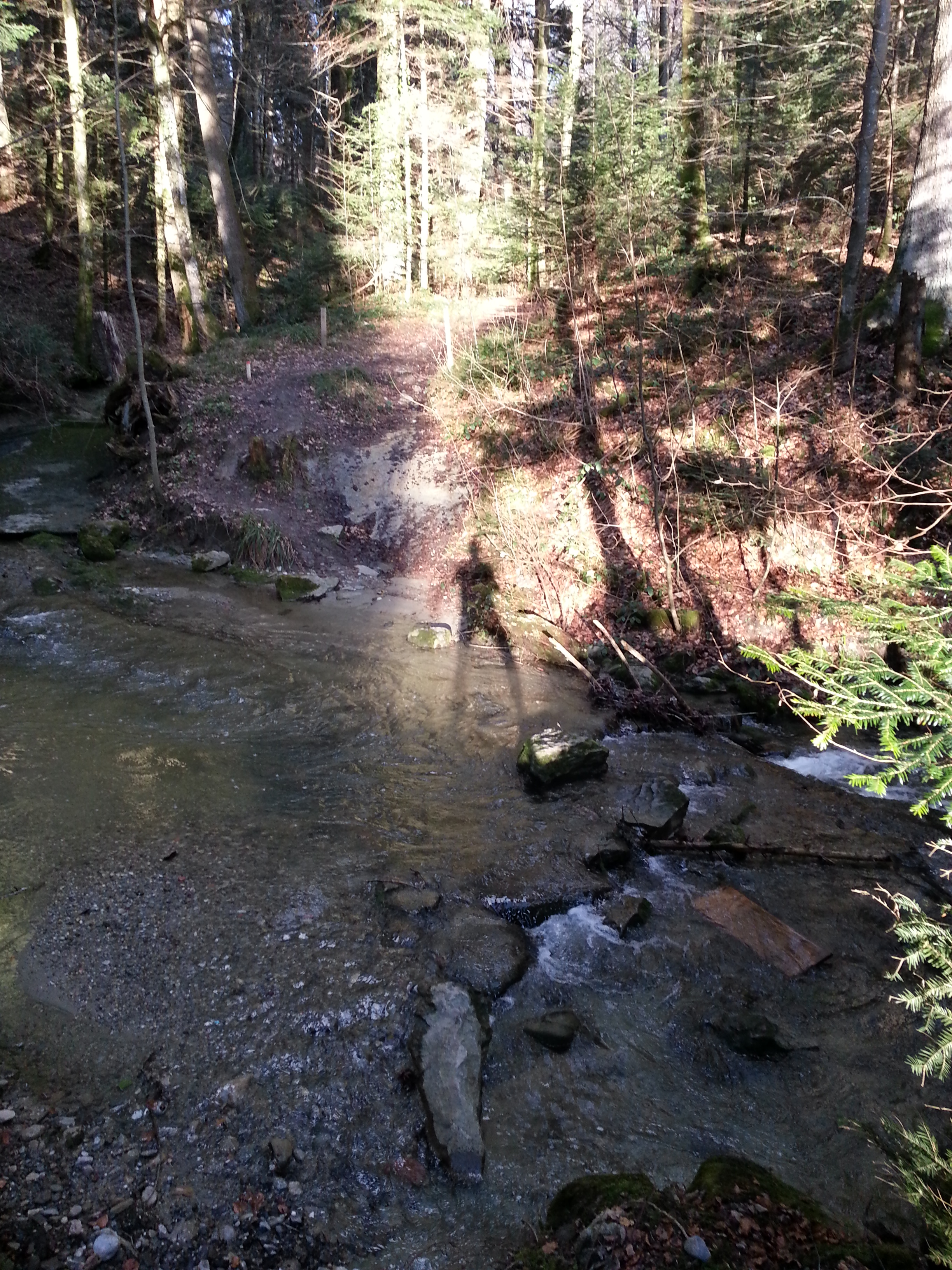 Weather this winter is most similar to the autumn. Majority of the day the rain is falling, the sky is cloudy and there is not sunny, natural source of vitamin D.

So, when clouds parted even for a moment, it is important to be ready and immediately to move on. A better weather found me recently on Saturday in the area of my own blog route, it means running route. The star closest to the Earth appeared on the sky and was shining magnificent, and evaporating forest path invited to the run. I observed that day a few additional attractions worth a description and presentation on photos…

The stone La Pierre à Cambot was excellent visible because all leaves on the trees around disappeared. Tables, benches and fire places are looking for the summer and for the guests. 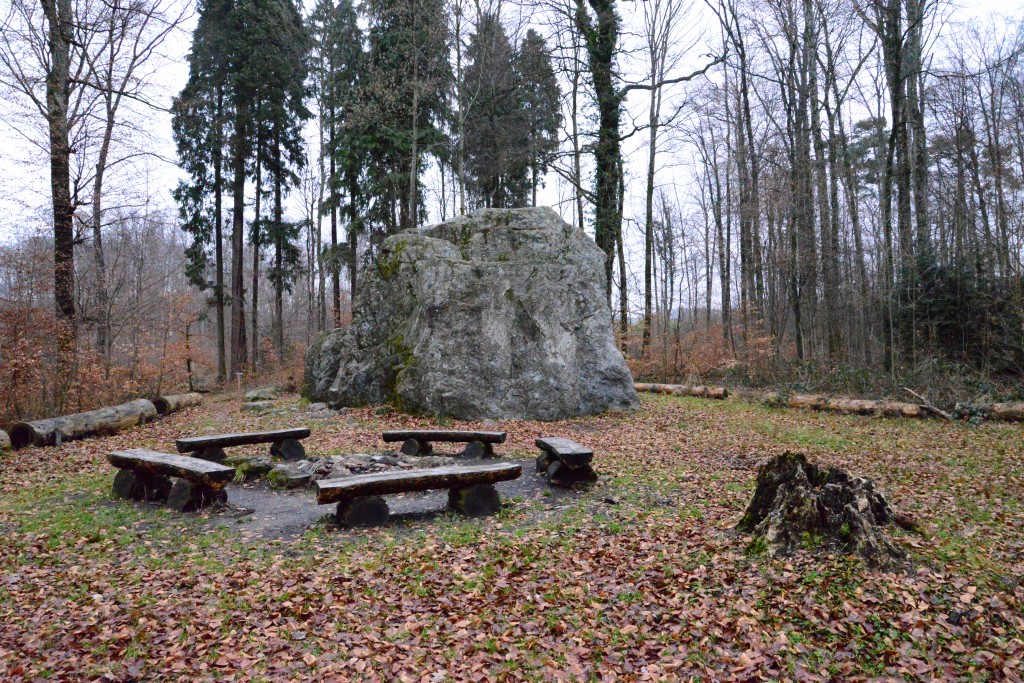 It appeared that canyon Le trou de la Sorcière, by which you can run down to the river La Mèbre, has its name due to one lady which lives on the near tree. 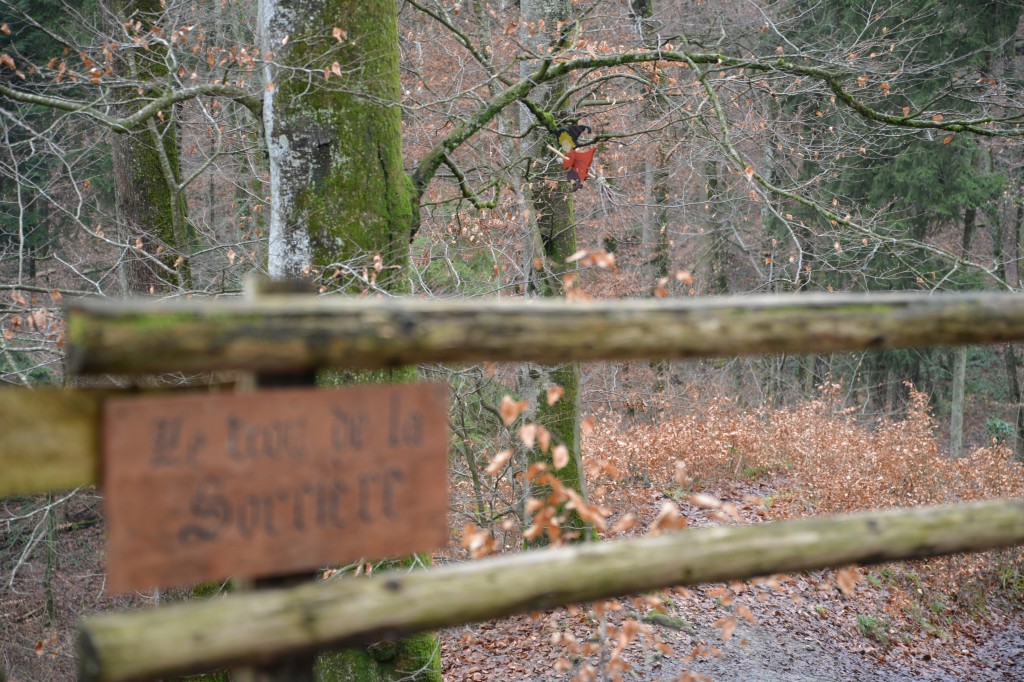 Knowing by heart the outstanding work of the Dominican inquisitors Heinrich Kramer and Jacob Sprenger “Hammer of the witches” (Malleus Maleficarum) I run down without a fear until the very bottom of the hole (le trou) and cross the river with my head held high. 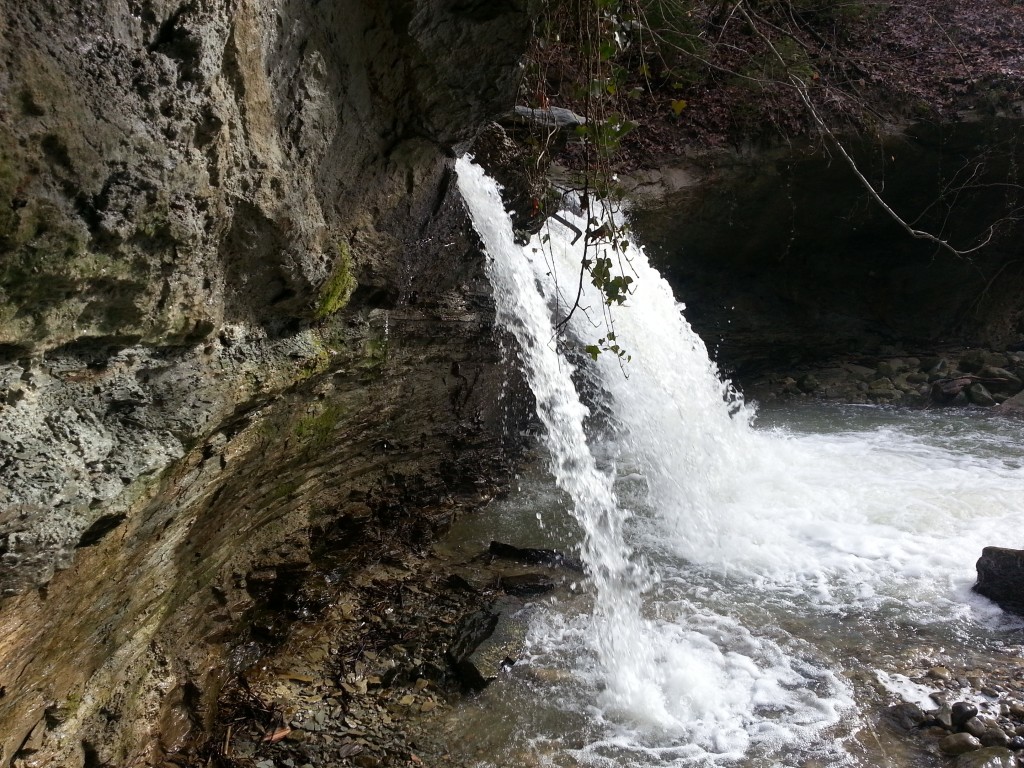 [...] all that is carried away by the stream’s silvery cascade, rhythmically falling from the mountain, carried by its own current—carried where? [...]

Running further in fairytales mood I have crossed the portal of my imagination and landed in Cambodia, in Ta Prohm temple where Lara Croft was looking for talisman giving power over the time-space continuum. 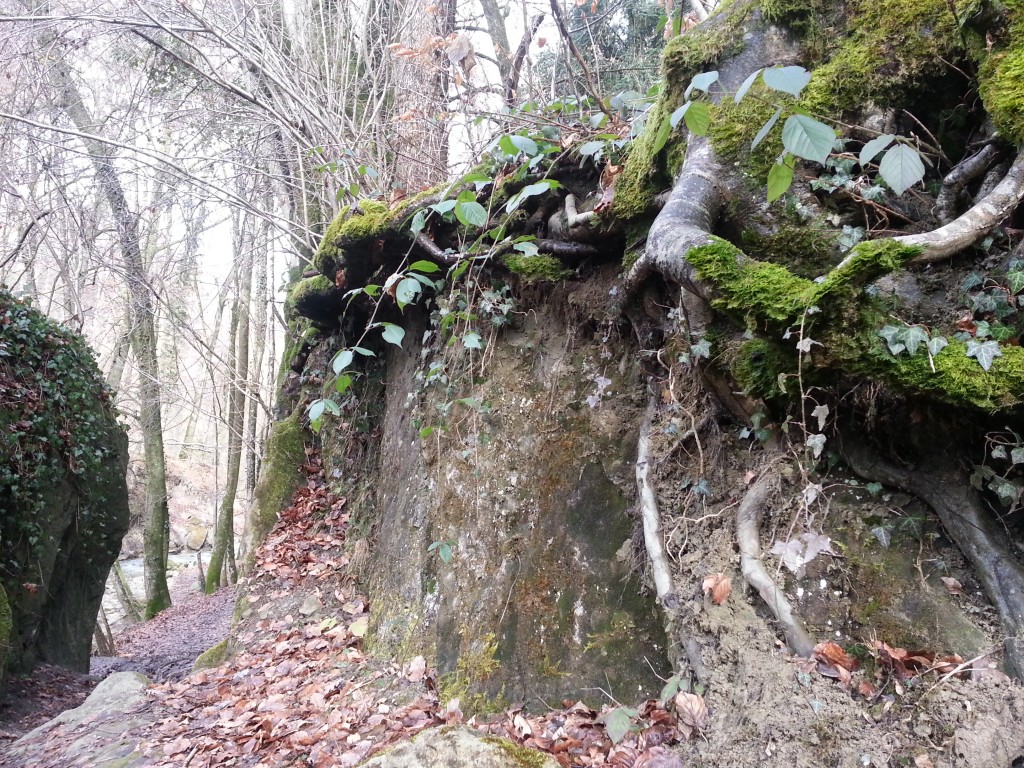 Ta Prohm in Canton the Vaud 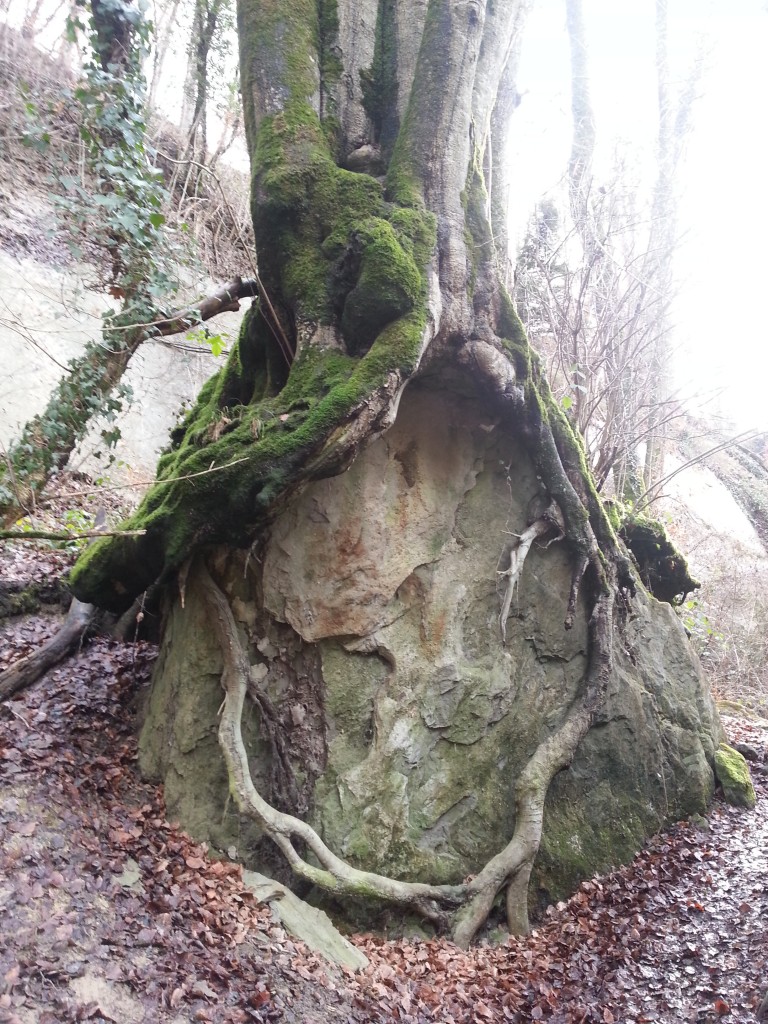 I hope that my finding will convince creators of Tomb Raider and next part of the adventures of brave Lara will be filmed in Canton the Vaud. In such important business matters you have to rely on recognized authorities:

Imagination is more important that knowledge because knowledge is limited.
/Albert Einstein/

After few hundred meters I came back to our dimension but did not stop improvising and just after watermill Le Moulin – Dessus I turned right, up to the hill through the bridge. Thanks to that maneuver I found interesting monument of different kind and from more recent times. 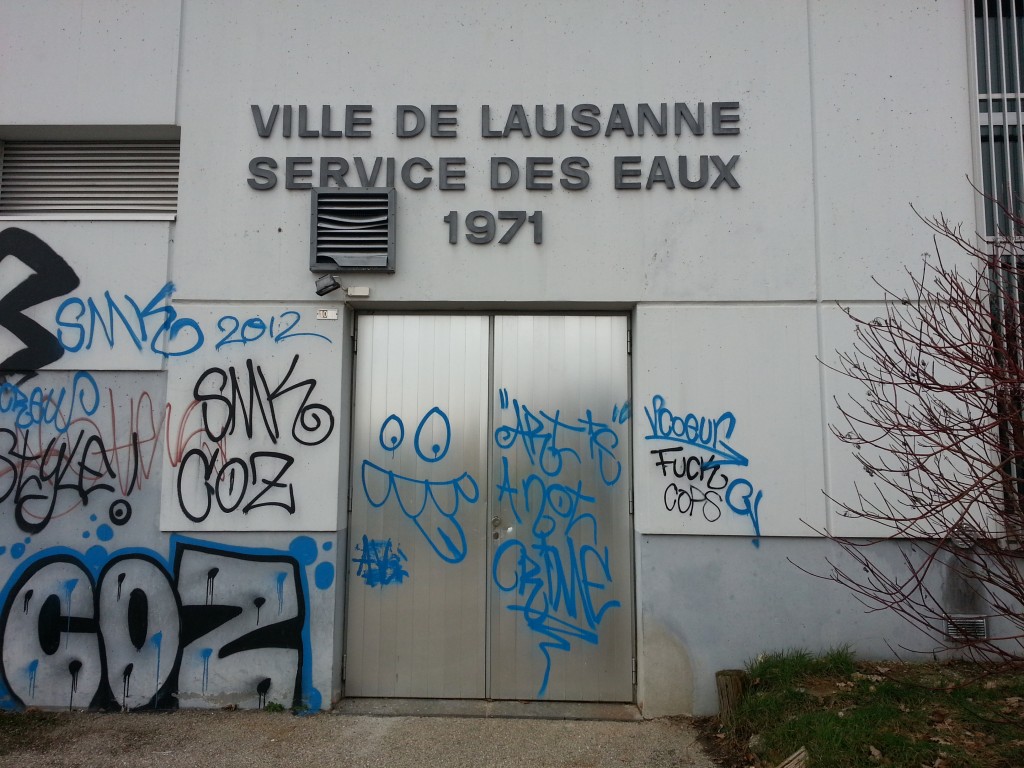 Water is a treasure

When I returned home, it started heavily raining. I finished just in time.

On Sunday I was also running in the short moment of sunny weather. This time between Epalinges and Chalet-a-Gobet. Place easy accessible from the center of Lausanne (close to Croisette, the termination station of metro). Additionally I have there excellent base at my friend house, where I can change, wash and drink a tea. It is narrow forest path but it leads from time to time by the historical route from Romain time, which was used by the merchant to move from Lausanne via Moudon and Avenches towards Bern.

Each Chalet is Full of Advantages

The road through Bois de Peccau is conserved well thanks to Swiss Forest Law introduced in 1876, which efficiently hindered further deforestation and at the same time protected forest paths lead through those areas. In contrary on the city areas many historical routes disappeared due to pressure from developers to build new housing and new roads.

Continuous climb was worth it and finally I have arrived to the place which reminds a bit swamp, where James Bond was jumping over the alligator heads. 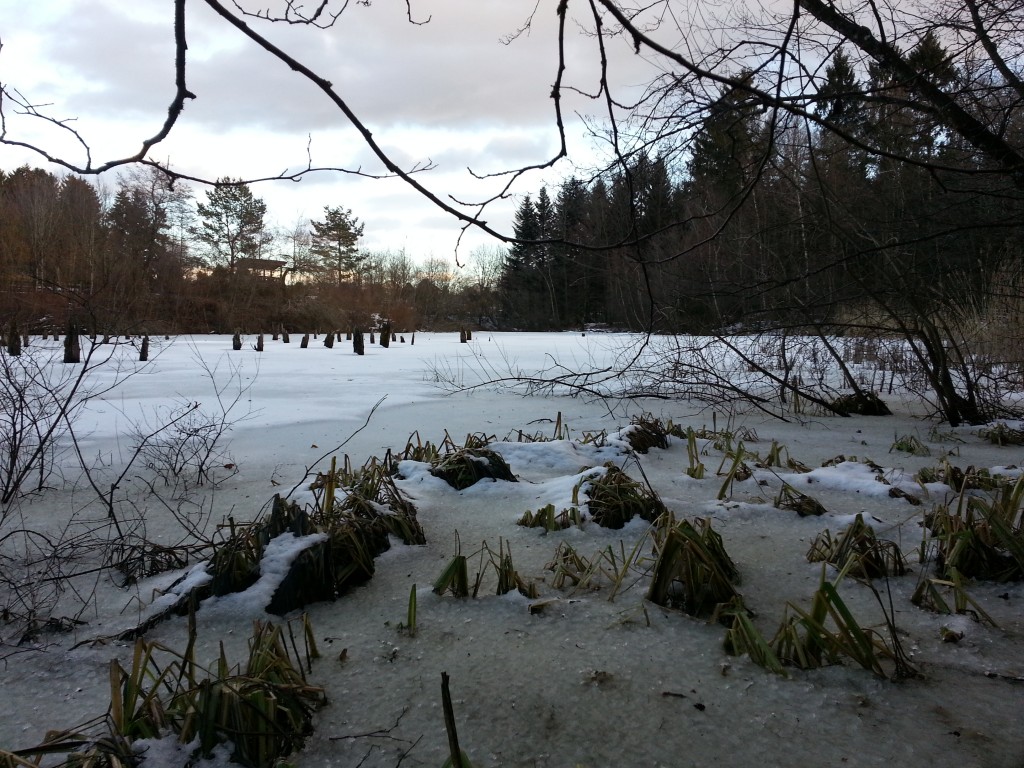 Taking into consideration the latest news from United States I was not surprised that swamp Everglades frozen and only after a moment I recognized that again I bent space-time continuum and teleported myself to other dimension. But the moment has come to return and drink hot tea, and as Anne Shirley used to say:

But the worst of imagining things is that the time comes when you have to stop and that hurts.
/Lucy Maud Montgomery, Anne of Green Gables/

I came back to my base in Epalinges where I was offered with delicious tea Darjeling FTGFOP from first, spring harvest. Secret abbreviation in the name of this variety means that it is tea of highest quality, prepared from the softest leafs, from the top of the bud. This abbreviation can be also translated with humor as “Far Too Good For Ordinary People”.

Additionally after physical effort it is good for the balance to train brain (and vice-versa). Therefore we have played strategic play “Genius”, in which you have to equally divide forces to all pawns. It reminds me cooperation in the team and that immediately moved my thoughts to my previous team in my previous work.

My colleagues surprised me recently and provoked emotions, because they invited me for farewell meeting in the restaurant in Neuchatel and handed a farewell card with the coupon to sport shop. I have to admit that it was nice and confirmed my observations that not the raw materials, not components, not machines and not the computers but the people are the most valuable asset of the enterprise.

Two gin-scented tears trickled down the sides of his nose. But it was all right, everything was all right, the struggle was finished. He had won the victory over himself. He loved Big Brother.
/George Orwell, 1984/