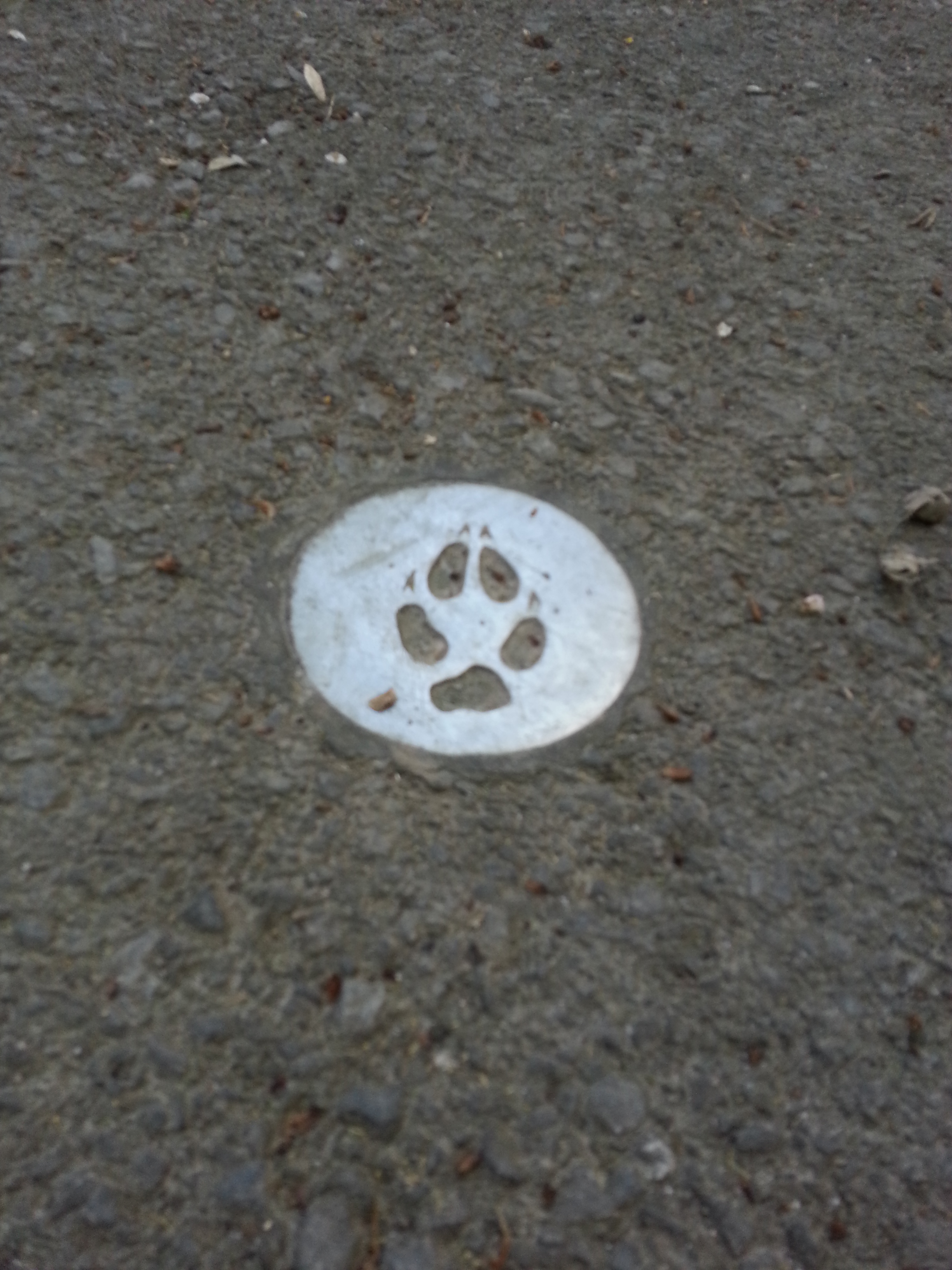 Once again, I completed the run 20 km de Lausanne and all this thanks to the systematic training preceding this sport event. During preparation period I got to know new, interesting places and routes, among other, “fox trail” along the river La Vuachère, which cuts into the limestone rocks surrounding Lausanne, creating a picturesque gorge in the middle of the city.

Sources of the river gushing in the vicinity of Epalinges at the height of 730 m above sea level and the mouth to the Lake Geneva is located at an altitude of 372 m above sea level. The length of the river is 7 kilometers, but the route is longer by one kilometer, as sometimes, for safety reasons is moving away from the riverbed. The gorge is an important enclave for many species of plants and animals about which can be read on the 130 information boards along the route. Indicators inform also about the geology, history, architecture and curiosities associated with the river. The route is marked with a silver trail of the fox and the orange-blue stakes, so in theory there should be no trouble finding the way, but sometimes you need a lot of looking around to find the next clue.

For people with children and hikers I recommend a downstream direction from Croisettes to Ouchy while for the athletes (especially those preparing for Lausanne 20km) mandatory direction is up. The route begins at the Gothic tower on the eastern edge of the boulevards of the Quai d’Ouchy. But the truth is that the tower does not have anything to do with the Middle Ages – it’s a fake. At the beginning of the nineteenth century, three wealthy inhabitants of Lausanne, William Haldimand, Vincent Perdonnet and Charles-Sigismond de Cerjat, threw an architectural challenge – the winner would be the one who would build the greatest fake ruin in their property. Such strange subject of the competition resulted from a romantic delight of the Middle Ages, longing for knightly virtues and moonlight on the castle walls…

He glanced: the moon is lighting
On Czatyrdah, and weakening the pupil
With huge circle, a bit of rose…
Like a new phenomenon, so big.
Welcome star! in that arbor,
Which I build from ghosts and knights,
I need your flashing silver;
Sometimes your radius as a sword will strike
And through the greenness will get to the nymphs
Of alabaster; even to the tower,
Where Danae is sleeping, eyes narrowing nice,
Even there with the rain of verse I will come.
Oh! shine, the moon!
/Juliusz Slowacki, Beniowski/ 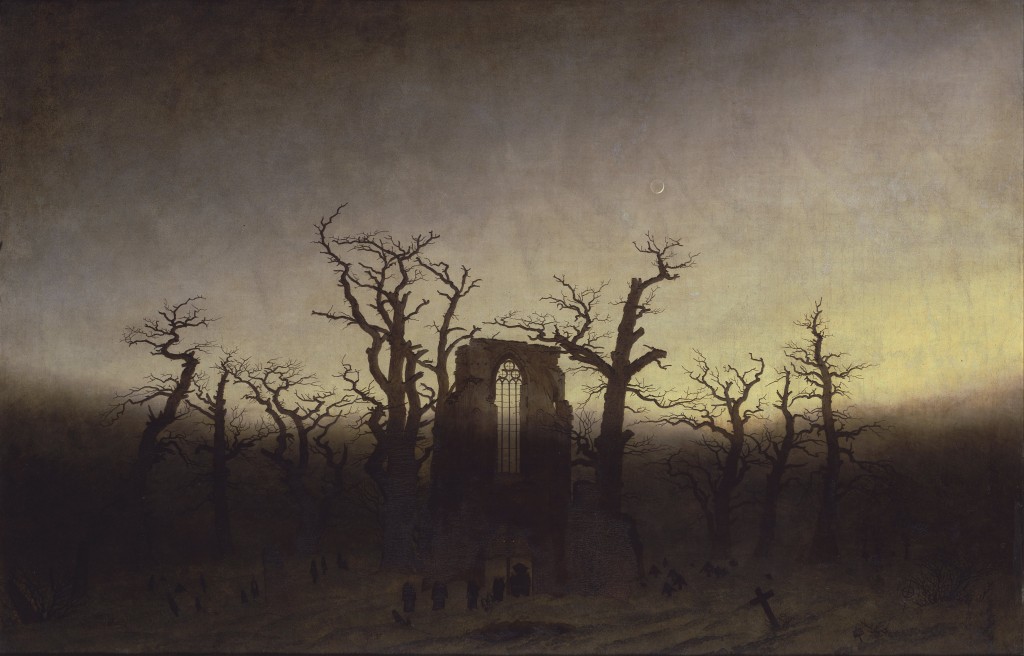 Vincent Perdonnet’s building can be seen in the Mon-Repos Park. The design of Charles-Sigismund de Cerjat in Rovéréaz unfortunately no longer exists. William Haldimand, the owner of the Denantou, won the competition and his tower we can see at the mouth of the river La Vuachère.

I started from the tower to the north by Avenue de la Tour Haldimand and after about 60 meters turn left into a narrow passage between the fences. I crossed the bridge and step into Denantou Park. Immediatelly turned right at the wooden catwalk. On the left side, behind the trees is a playground for children and Pavillon thaïlandais. 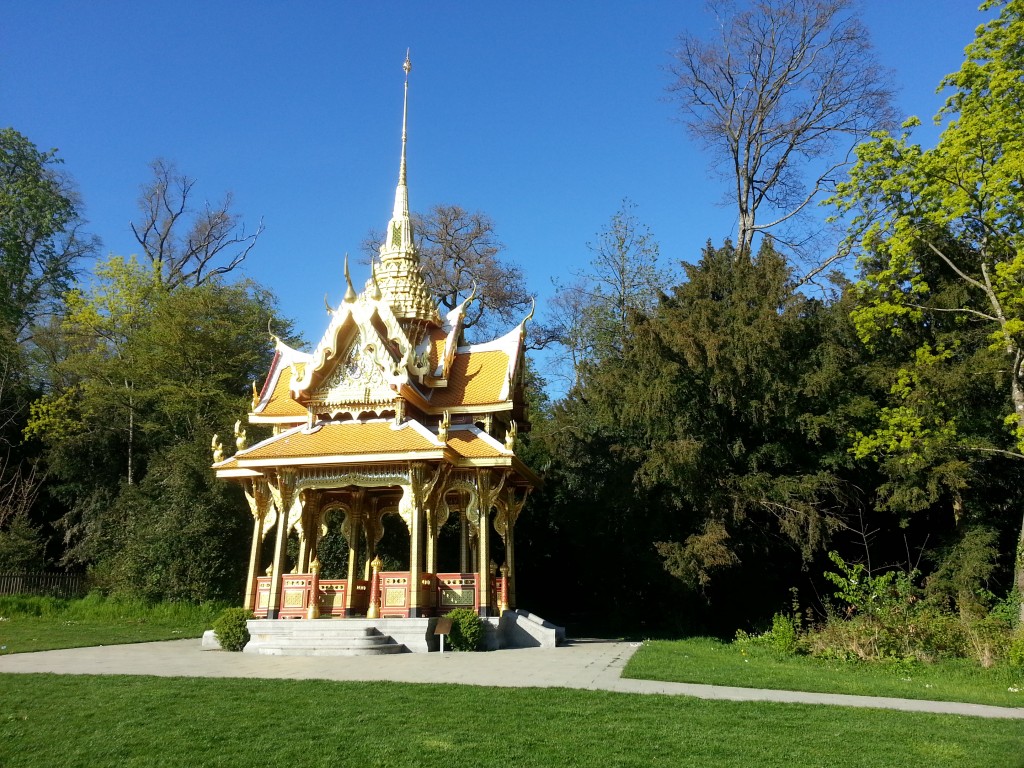 I ran further up until the Avenue de Denantou which I crossed, following fox traces and after a while I turned right into the alley along the river. 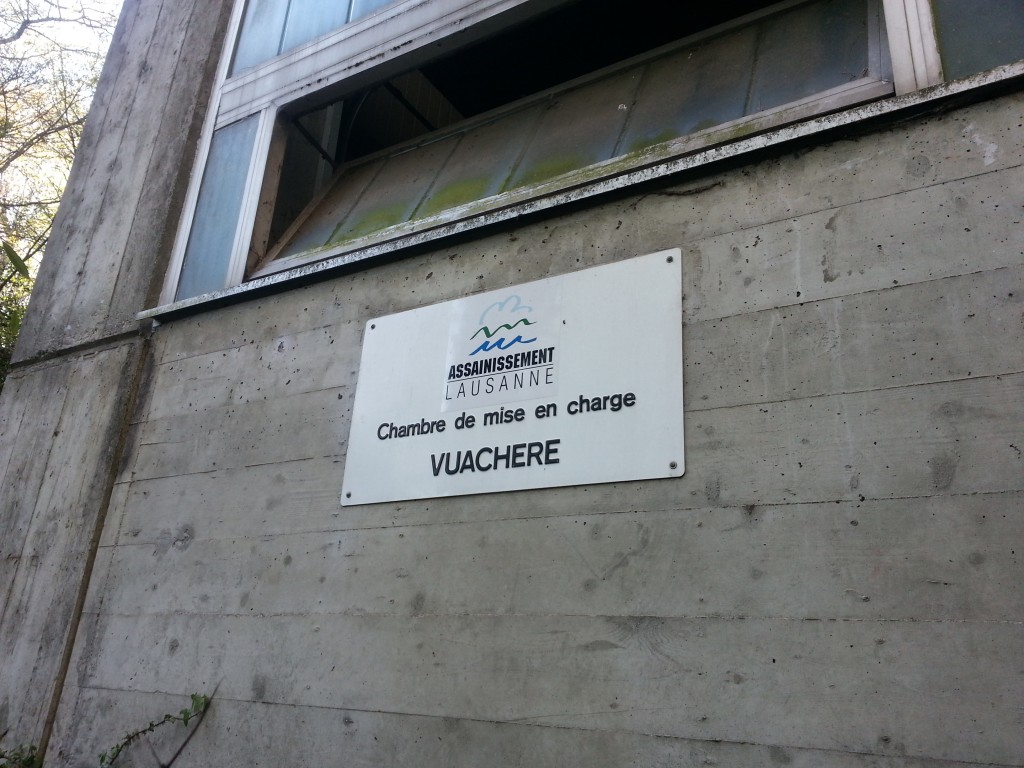 On the right I passed a large building of Sanitation Service (Le Service d’Assainissement) and after a while the Devil’s Bridge. It is a wooden, roofed structure that leads to the other side of La Vuachère and then to the Collège Champittet. 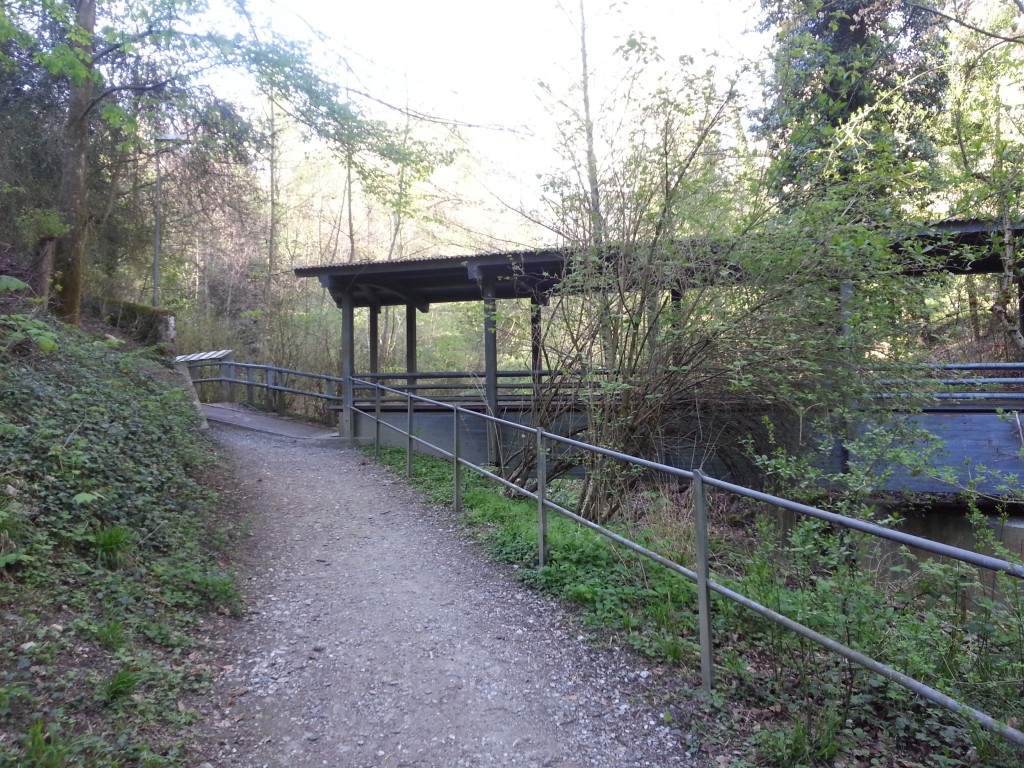 I turn left, uphill to the wooden platform, which brings me to the Avenue de Montchoisi. I cross the street and find silver fox traces, which bring me through the hedge narrow passage into the blocks of flats. With the nose down I follow silver marks and reach the Chemin de Chandieu, which leads untill the railway viaduct under which I run. On the other side of the tracks I cross the bridge over La Vuachère and I turned right into Chemin du Trabandan. 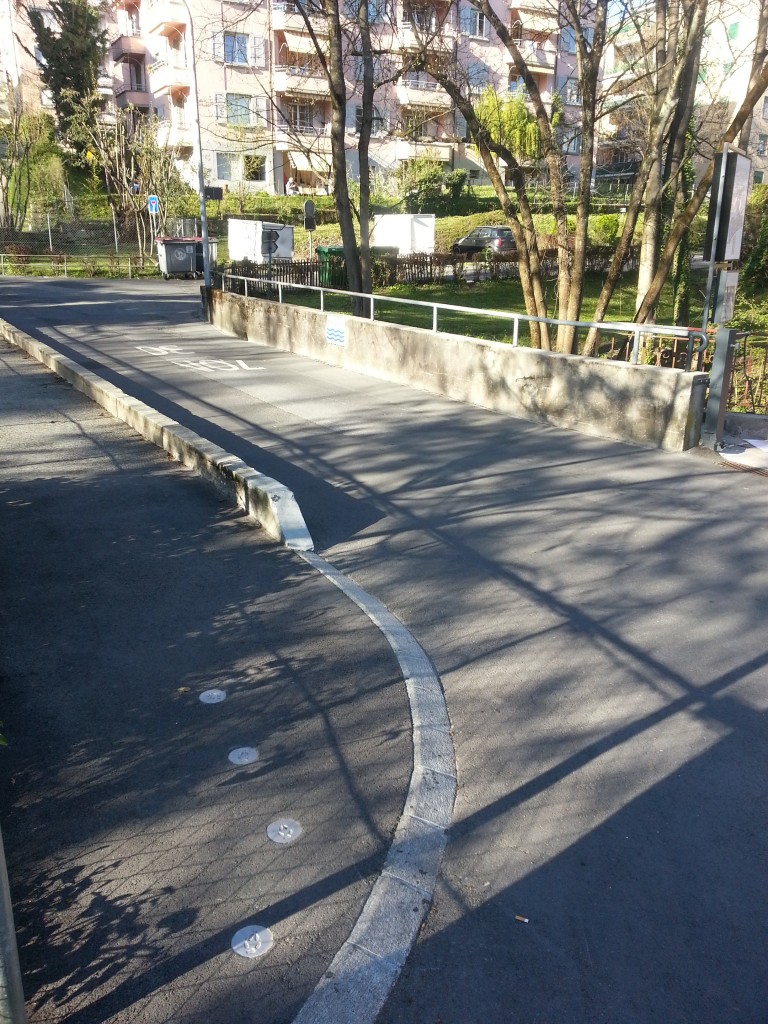 Wending to the left I would reach the Office des poursuites du district de Lausanne at Chemin du Trabandan 28. This is the office that issues very important in Switzerland certificates that the person is not in arrears with payments and have no debts (attestation de non poursuite / attestation de solvabilité). Without such a document you cannot rent an apartment or business premises, you can not take the credit or set up the company.

I was moving all the time straight ahead between the buildings, until I reached directly the river and by very nice path along the riverbed I ran through the woods. I passed the basketball and football courts and further, between blocks of flats I ran out on the Avenue du Léman. I crossed the street and under the railway viaduct got on Chemin du Levant. Just behind Déchèterie de la Perraudettaz I turned left into a narrow gravel lane which after a while becomes a forest path spilled with sawdust. 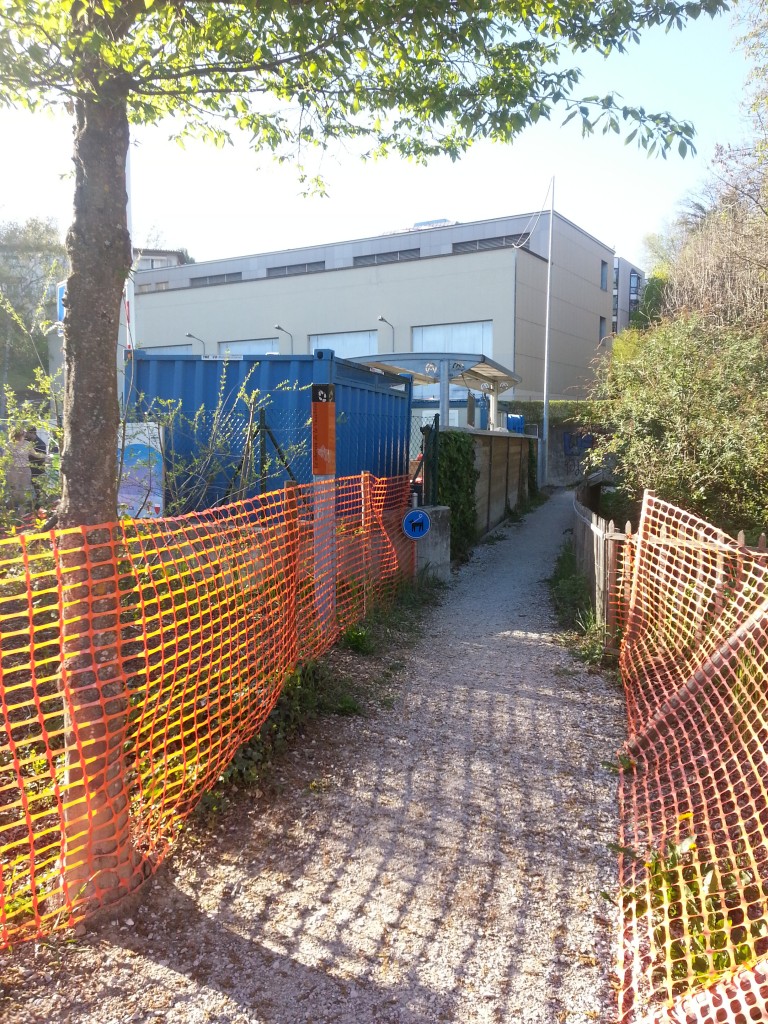 The path behind the garbage dump

I ran along the river up to the Chemin de la Vuachère, I turned left sharply and ran up to an intersection with Chemin du Levant and I turned into it right up (already ran this street earlier). Now real climbing started up to the orange-blue post, on which the arrow orders to turn right (chemin provisoire). I ran flat for a moment and then down through residential area until the path that climbs up switchbacks up the grassy slope. At the top is worth to climb a bit highier to Belvédère de la Gottettaz, which offers a view to the eastern part of Lake Geneva (Haut Lac) and the Rhone Valley. 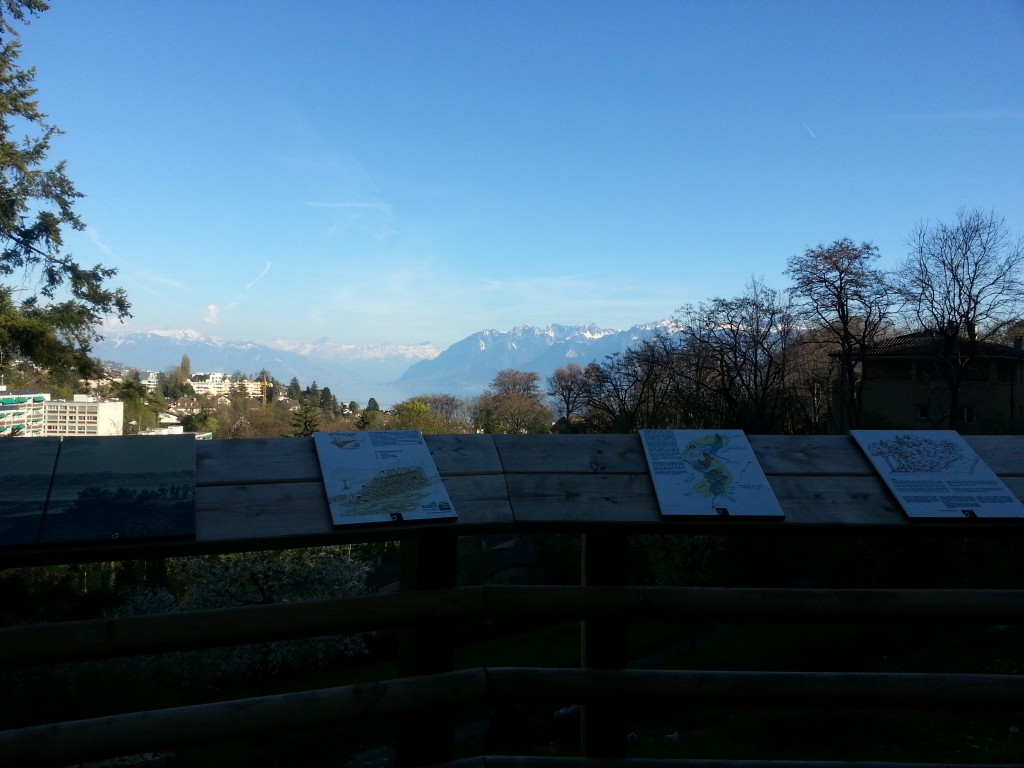 From the Belvédère I ran down to the left to the Parc de la Gottettaz. On the right side I passed the wooden sculpture of fox and on the left a large shelter. Running ahead I back to the vicinity of the river and along a large residential block climbed up to the Avenue de Bethusy. Here La Vuachère hiding in the underground channel. 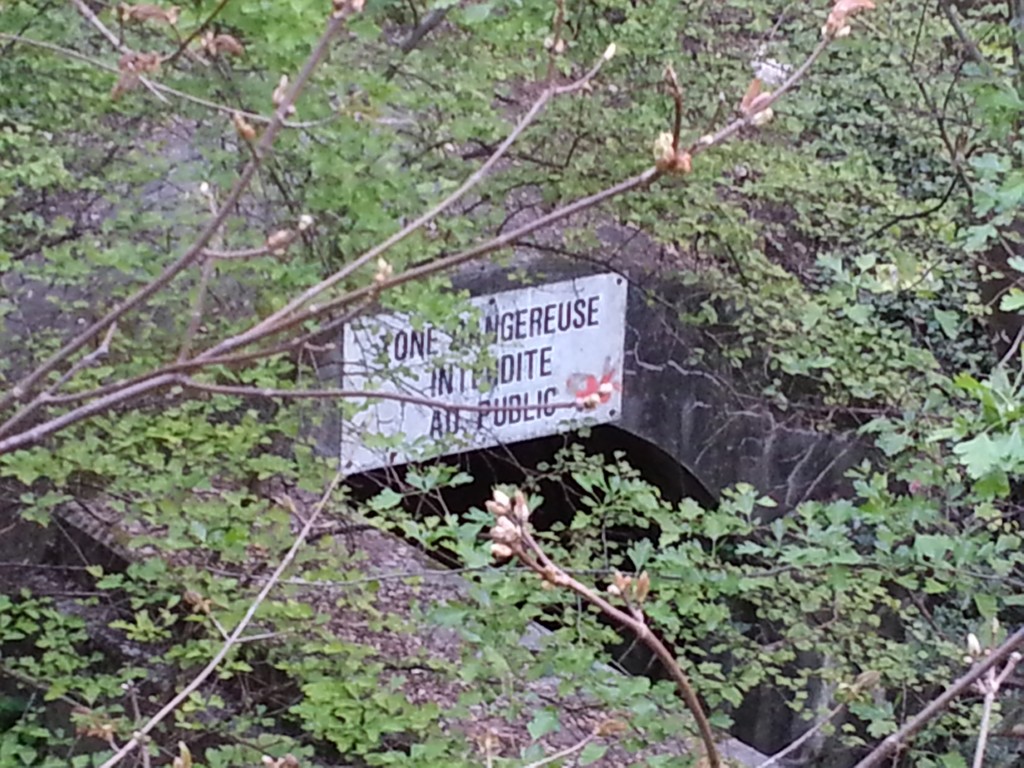 Following fox footsteps I run next to Chailly roundabout and turn left into Avenue de la Vallonnette. I run up and at the Maison de quartier de Chailly turn right. I cross the square in front of the community center and run in between the trees and I run down where meet again La Vuachère.

After crossing a wooden bridge, I run by the path along the river to the farm Aebi, where fruits, vegetables, flowers can be bought and before Christmas, Christmass tree. I circle flowerbeds and greenhouses, and get on the Avenue Victor-Ruffy, where I turn right and in a moment right again. 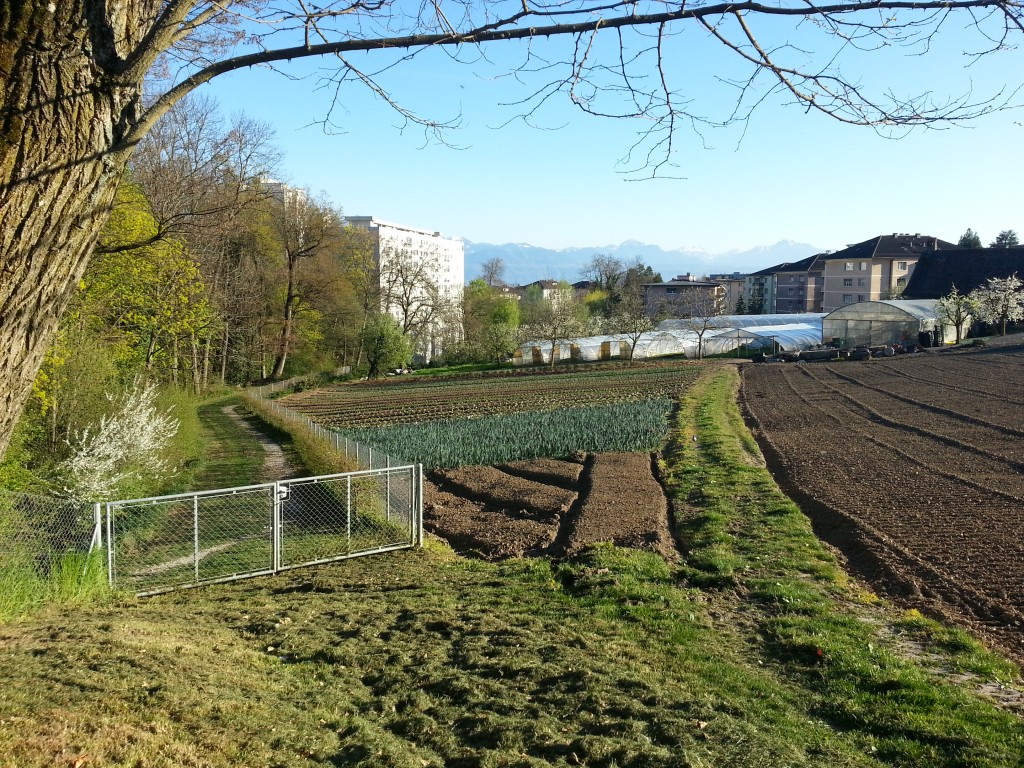 Sir Thaddeus – Book I: The Farm

I run down Avenue du Temple, turn right and just after a little while left, into Chemin de Champ-Rond, which will guide me for about 550 meters through the quiet residential area, again away from the river. When La Vuachère appears once more, I cross it over the bridge and climb by the stairs to the parking place at Route d’Oron. Silver marking of the route carry me to the other side of the street, then I cross Avenue de Valmont and turn left into the forest. I run next to the building where the residents organize different events, such as birthday for children. Note, I do not run stright but turn right onto the wooden bridge and just after it to the left. 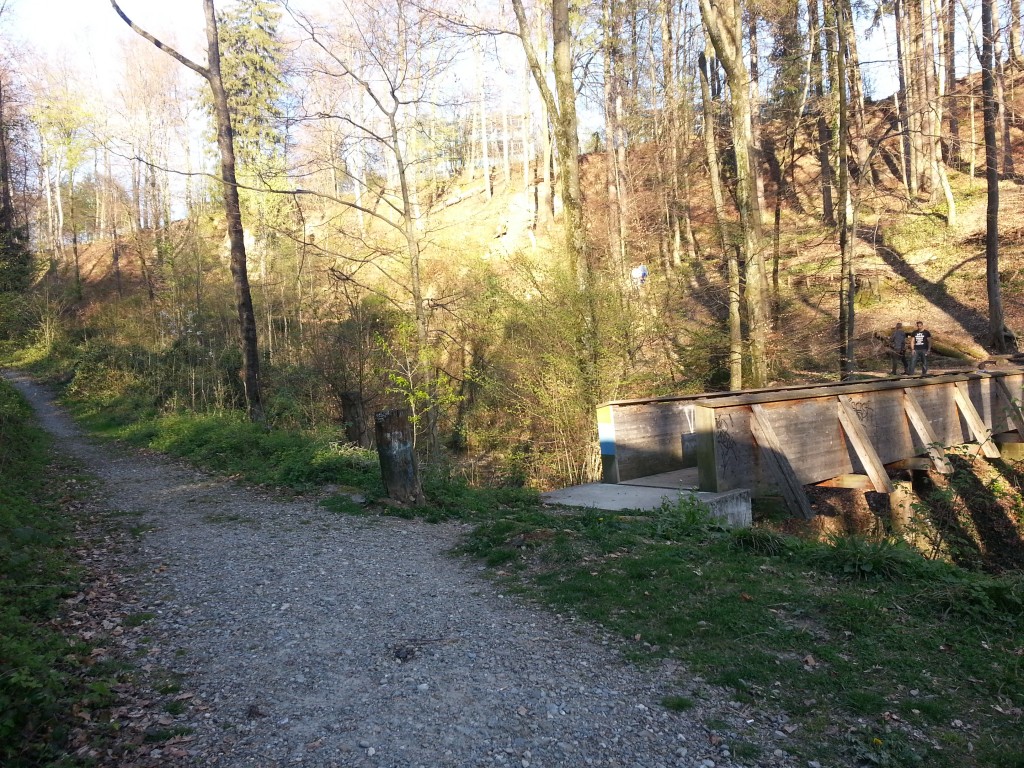 A Bridge Too Far

I have been bitten by a dog, whose owner carelessly let it go without a leash. I loose the time to escort this lady to her apartment to see if the dog was vaccinated against rabies. Luckily it was! In addition, the lady pays me $123 million as a compensation for traumatic experiences. Oh, probably I have hallucinations caused by the shock – here are not the United States. The owner of the dog just apologize me and we split up. 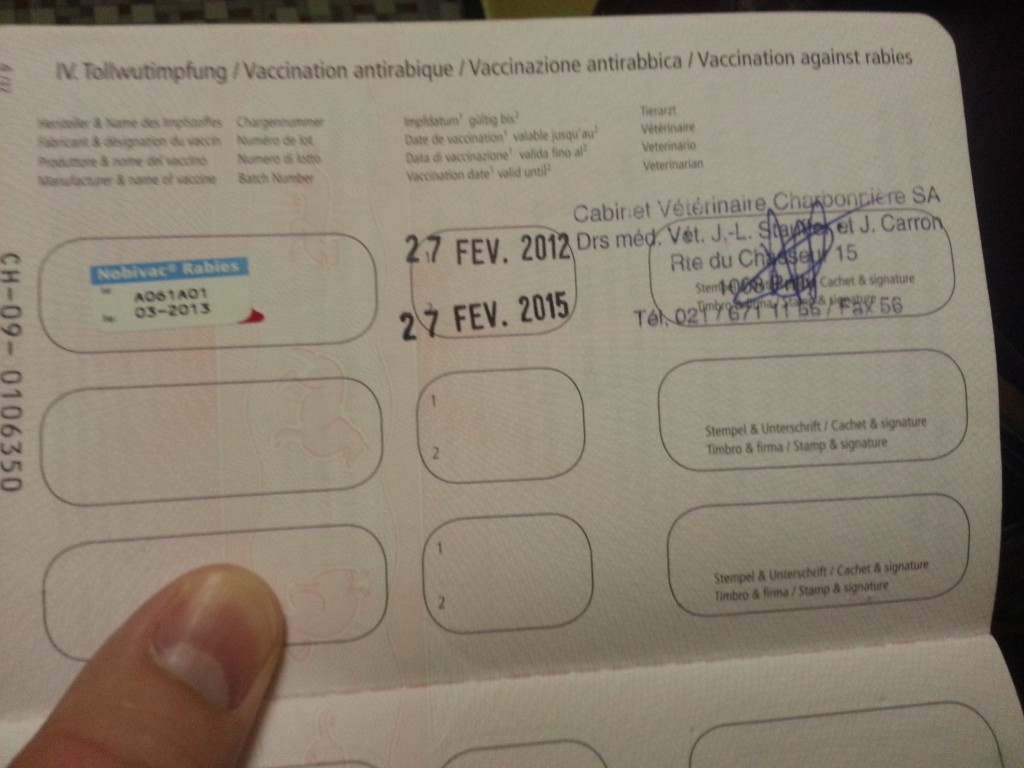 Light climbing begins on the path covered with sawdust. In the ravine on the left, weakly flows La Vuachère. I run to the point where the brook hides again underground to flow under the highway Lausanne Nord. 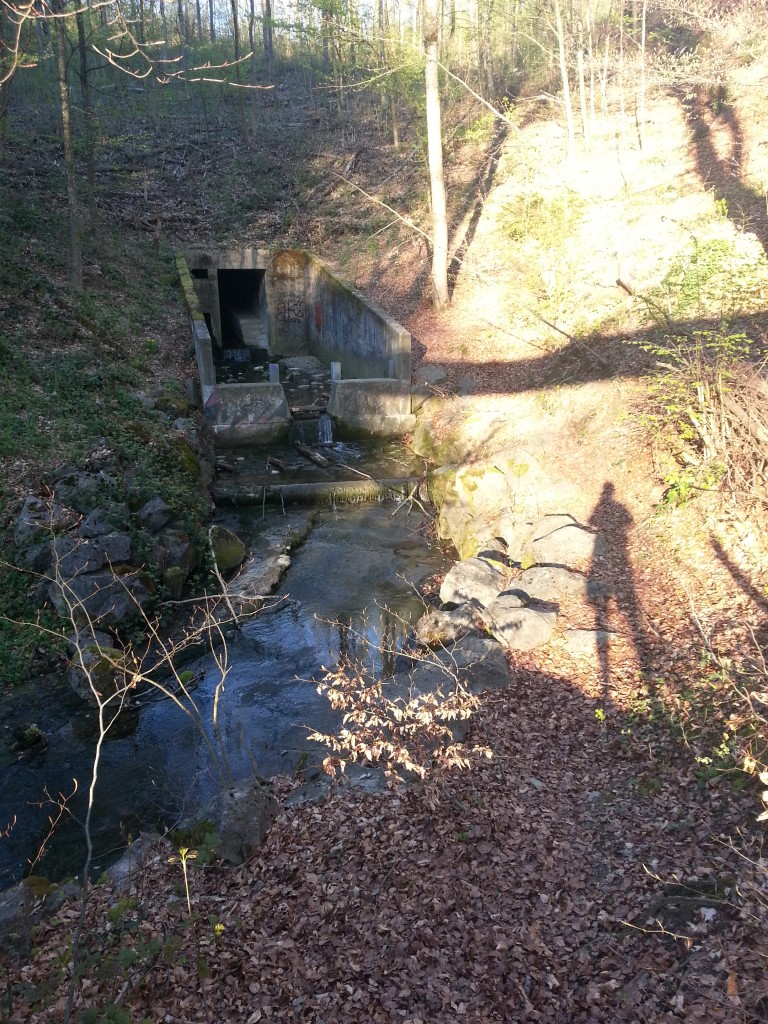 Hence, further up and to the left, and continue alongside the schoolyard (not yet run up to the bridge over the ravine). Continue along the path close to the estate I reach an covered walkway, through which enter the other side of the highway. I turned diagonaly to the right, encircle large block of flats and turned left into Chemin de Praz-Séchaud and after 260 meters turn left again on Avenue de Valmont. I cross the bridge over the ditch, where theoretically our river leaks and reach the last information board sur les traces du renard.

From here, I run left down on the Avenue de Valmont next to large meadow. I pass the buildings of Lausanne Transport Company (tl) and via the tunnel under the highway run to a group of tall buildings. Before the first of them, I turn left towards the riverbed of La Vuachère. I cross the bridge suspended high above the gorge (which I did not previously crossed from the opposite side) and I close the loop. 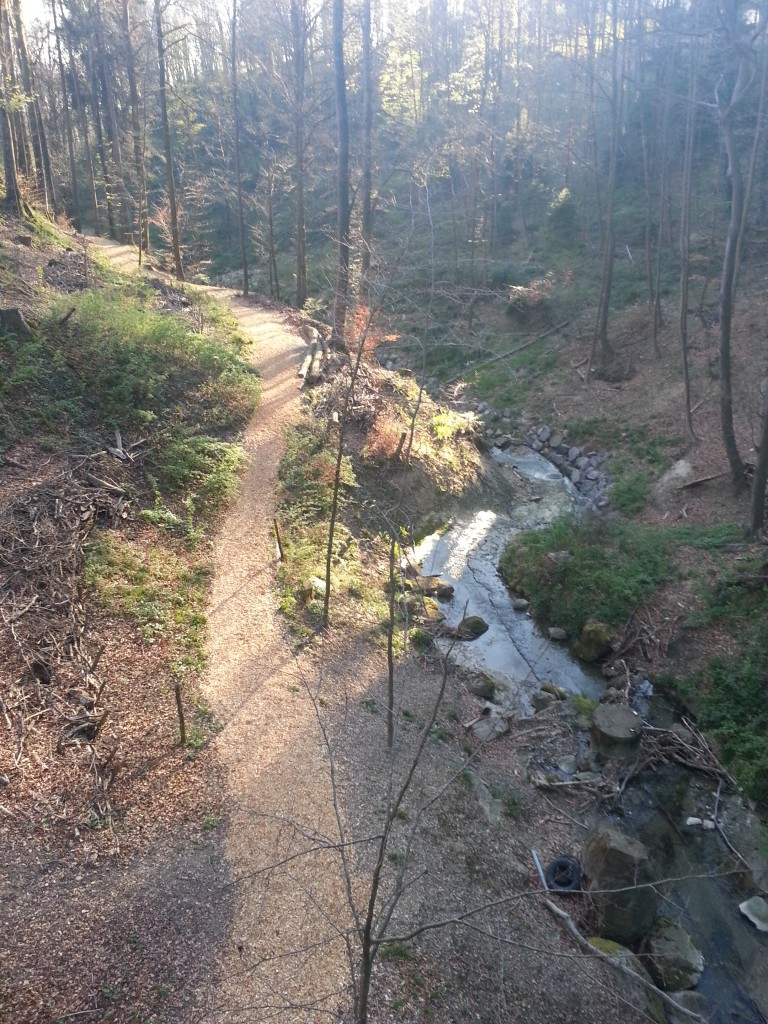 Now, all the time I run down following fox and my footsteps until La Tour Haldimand. In the vicinity of the Belvedere, where as I said, there is a great view to the lake, I see on it’s bottom some buildings, towers and turrets as well as mysterious shadows sneaking below the surface. So finally it is true, that the ancient sunken city exists at the bottom of Lake Geneva…

And the matter of Lake Geneva? Correspondents arrived from all over Europe! They began to speak, that the sunken city was founded in the times described in De bello galico when the lake was so narrow that it did not mix its waters with the waters of the Rhone flowing through it. The local carriers enriched themselves, transporting tourists by boat to the middle of the lake; oil was poured into the water to get a better view… A famous Polish archaeologist sent to the country an article in which he asserted that he saw at the bottom of the lake the intersection of streets and equestrian statue!
/Umberto Eco, The Prague Cemetery/