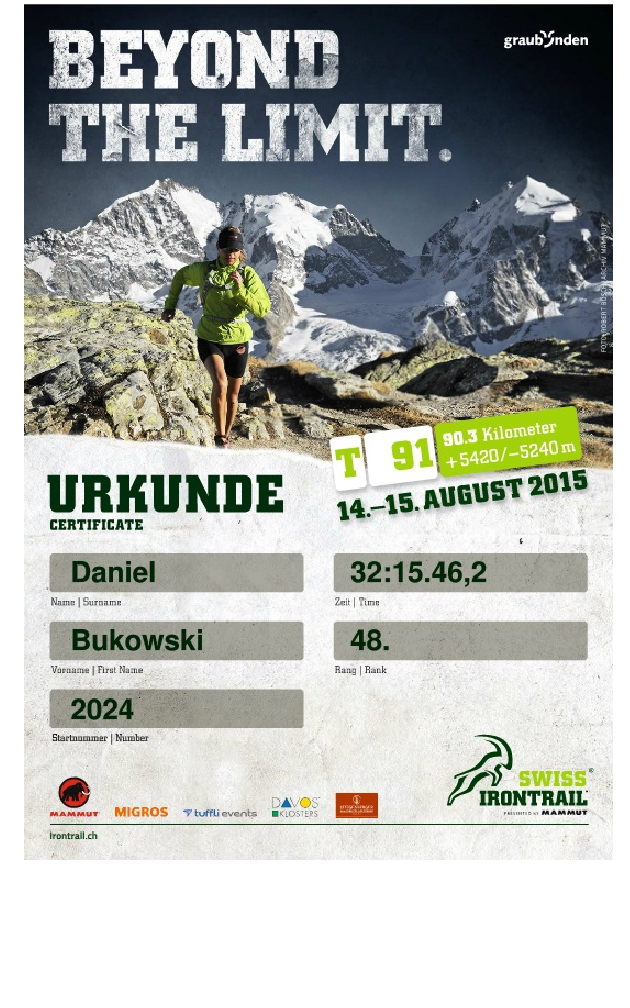 Heidi ran to the far edge of the slope and continued to wave her hand to Clara until the last glimpse of horse and rider had disappeared. /Johanna Spyri, Heidi/

I returned to Grisons, to take part again in the mountain race Swiss Irontrail, organized by my beloved Mammut. However, using the principle of “continuous improvement”, which was burned in my brain, but most of all in my heart during 17 years of working in some company (“Thank You for Smoking”), this time I chose distance of 91 kilometers, means more than twice long as last year, when as you remember, I ran 41 kilometres.

To the starting point in Bergün I reached by train. This time, there were no questionable “attractions” with the participation of bandits, which I described in previous article. On the route there were real attractions. Rhaetian Railway connecting two historic railway lines Albula and Bernina is the UNESCO World Heritage Site and considered one of the most spectacular rail routes in the world. The surrounding landscape with its quaint villages and romantic Alpine views is also the part of the World Heritage. The route was opened in 1904, it has almost 130 kilometres and runs through 55 tunnels and 196 bridges, of which the most famous is curved Landwasser viaduct.

In the sport hall I picked up the starting number with a chip to measure time and the GPS device allowing to locate me on the route. It was possible to eat bananas, chocolate bars, bouillon, Coca-Cola and water. For competitors running longer distances (121 km and 221 km) it was already another nutrition point. 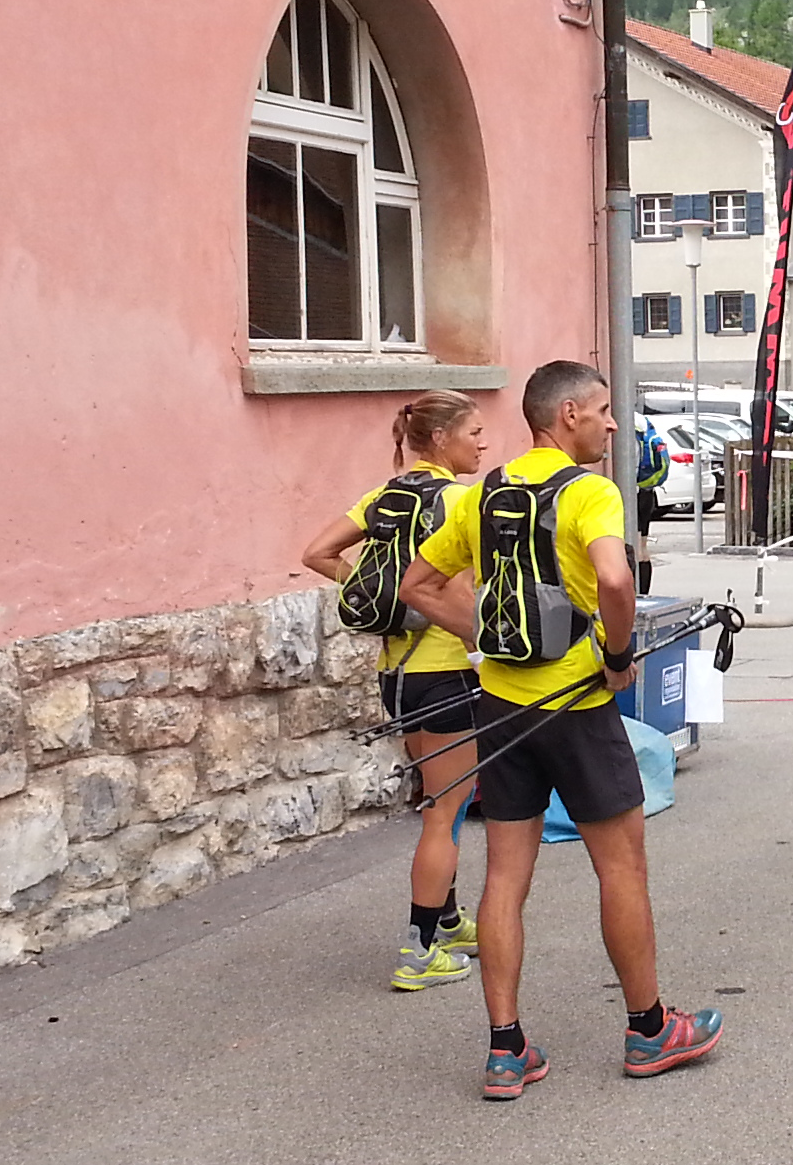 Among people competing with me in T91 I saw Ildikó Wermescher and Csaba Nemeth, professional runners belonging to Mammut Pro Team Trail Running, who, as it turned out later, won in this category. We talked briefly about running, Mammut, last year’s impressions from the race (it turned out that together with Ildikó we ran T41), Nemeth highly praised competitions played in Poland in which he participated (Race of 7 Valleys). I made a picture with Ildikó but unfortunately the quality is not the best one, nevertheless, there is a souvenir from a nice meeting and conversations. 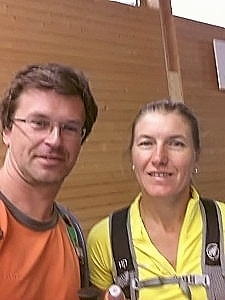 I must once again raise the matter which I have meditated and written about recently. With horror I have noticed that as well as I, Ildikó and Nemeth had no Mammut socks! We had everything “Mammut brand” but only this “sock’s crack” in the appearance…

The gun fired at 13:00. We moved initially on flat terrain (1373 m) and after a while started climbing to 2,831 m above sea level. As it is known, if for some time is uphill, then most likely later it is down. So it was this time. 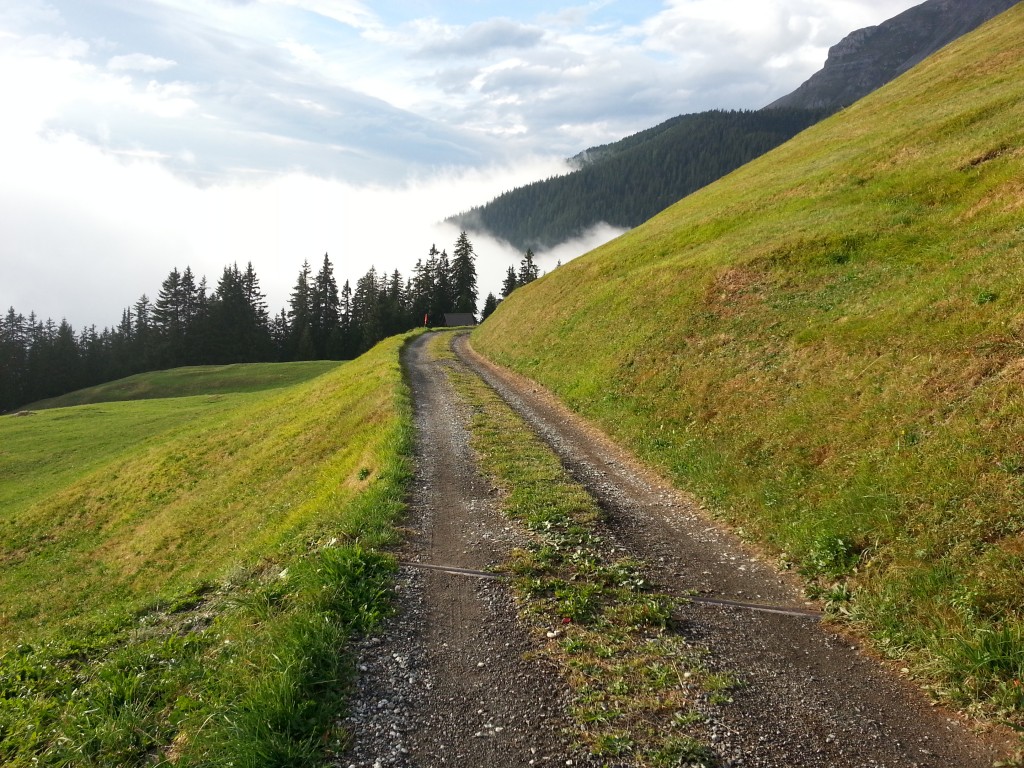 After part of the run in the vicinity of 2800 – 2600 meters above sea level, I went down from Pass digls Orgels (2699) to Savognin (1173). There was another nutrition point and the first night’s lodging. I noticed that some runners had help from families or friends who were waiting for them in main food / accommodation points and delivering fresh clothes for disguise, embrocating warming / analgesic ointments and feeding with delicacies. I had not thought about it and did not involved my family in helping on the route. My fans have only to greet me at the finish, as last year but it turned out that T91 is much more demanding than the T41. Another tip for the future.

Anyway, in Savognin I did not decided yet to sleep. I have just eaten and drunk and moved forward… 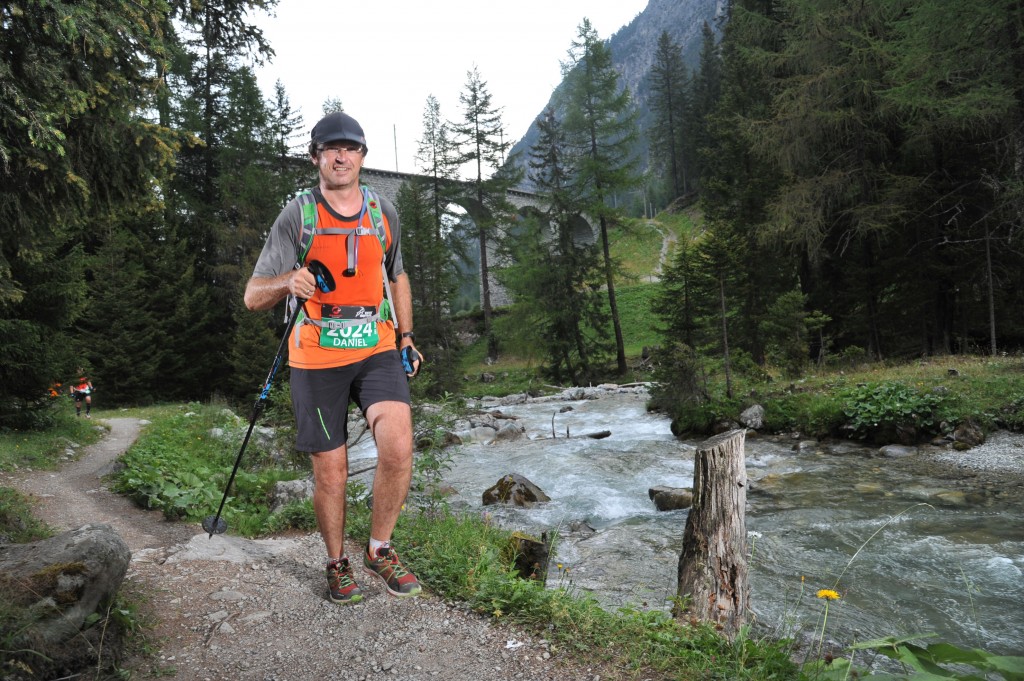 Nocturnal part of the route I recall with great fondness because it was an experience other than that with which man meets on a daily basis. Night chill, mysterious noises, crackling, voices of animals and werewolves and continuous focusing not to lose the route. Ah, something wonderful!

I decided to spend the night in Lenzerheide, the town where a year ago I started T41. I fell as dead and after a second (ah, this time dilation) I already stood up when the alarm clock rang in the watch. In the glow of the morning I set off on already known last year’s route but very different by the accumulation of fatigue. From Lenzerheide (1473) a way led up again above 2500 meters.

This time at Weisshorn (2653) there was not a snowstorm, but everywhere enveloped moist, dense fog. What made me wonder were screech of gulls and the salty smell of the sea. Something was wrong here…

Suddenly from the fog emerged a guy with a strange convex forehead and a funny mustache. He had matted hair, haggard and dirty face and eyes expressionless. He wore a stained faded, old bombazine coat, pantaloons of a similar character, a pair of worn-out shoes run down at the heels, and an old straw hat. It looked like individual pieces of clothing that he was wearing did not belong to him. He mumbled something unintelligible. When he saw me, he walked unsteadily in my direction. I was a little scared and squeezed harder poles, ready to defend. Strange guy asked in English:

– Is this Baltimore?
Then, I was already sure.
– Dear Edgar – I said – This is definitely not Baltimore, and it seems to me that you will not come back there. I think seraphim in heaven listened to you in the end and you will be able to meet with your beloved Anabel.
– Who are you? How do you know me? How do you know about Anabel?
– It may sound strange, but I read your stories and poems, as well as a description of… your mysterious death almost 170 years ago.
– You are saying that I am dead for 170 years?
– Well, I think you do not belong neither to the world of living nor the world of dead. You are suspended between them. And the time passes differently for you (ah, this time dilation).
– So this is Dream-Land?
– Not yet, but close.
Screeching seagulls and the sound of the sea has intensified …
– You have to go in the direction of the sounds. Anabel is already waiting on the beach.

He silently raised his hand for farewell, he turned and disappeared into the swirling mist. Running down towards Arosa and to the next nutrition point I have heard behind me a long restless roar like the sound of thousands seas. I have not stopped, I ran incessantly.

In Arosa, I made a break for a meal and a short rest in fantastically equipped anti-atomic bunker. It was the third and last place where one could sleep, but I did not use this opportunity anymore. The pillbox was equipped with bunks, toilets, showers and a kitchen. But there are some people (especially in Geneva) who complain about the tragic conditions in this type of premises. This is not a villa with a garden of course, but for sure the place is safer than a mud hut in Eritrea being strafed with mortars.

The climb from Arosa was moderately mild but the rain pouring from the sky made it far more difficult and to the last nutrition point in Jatz (1831) I arrived terribly exhausted. When tired and sleepy, I was scrambling to the last pass on the route, leaned on the poles, I thought why am I overstraining myself so much? And the next step up… Why, at my own request I am undergoing such a torture? And the next step toward the finish line… This is the last time, never again! And the next step…

At the Strelapass I exchanged a few words with the person who kept the checkpoint and “ticked” from the list, I ran down having the last five kilometers of the route in front of me.

When reached Davos, people on the streets, despite the night, were applauding and greeting me. HAPPY I crossed the finish line! 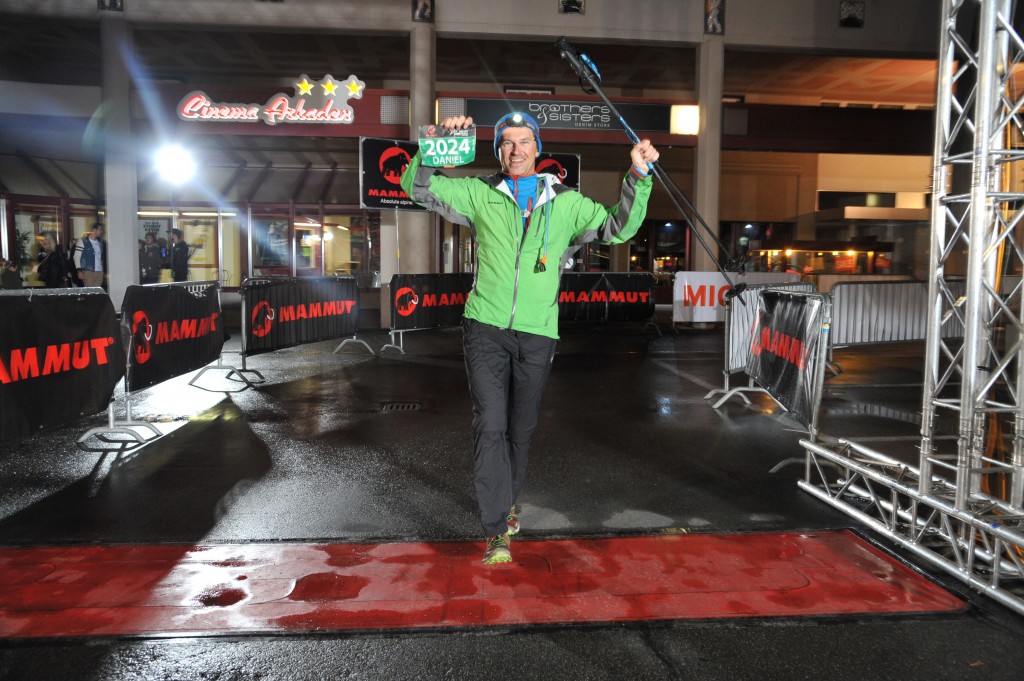 According to Datasport I was the last ranked participant in my category; some people did not complete the race. This time I beat 90.2 km horizontally and + 5420m / – 5240m vertically.

When relaxed, happy and proud I calmly ate grilled sausages and drank beer in the middle of the night, my painful doubts from climbing to the Strelapass… vanished like mist. I have already begun to plan when and on what race I will go next time – am I normal?

I have reached these lands but newly
From an ultimate dim Thule —
From a wild weird clime that lieth, sublime,
Out of SPACE — Out of TIME
/E. A. Poe, Dream-Land/